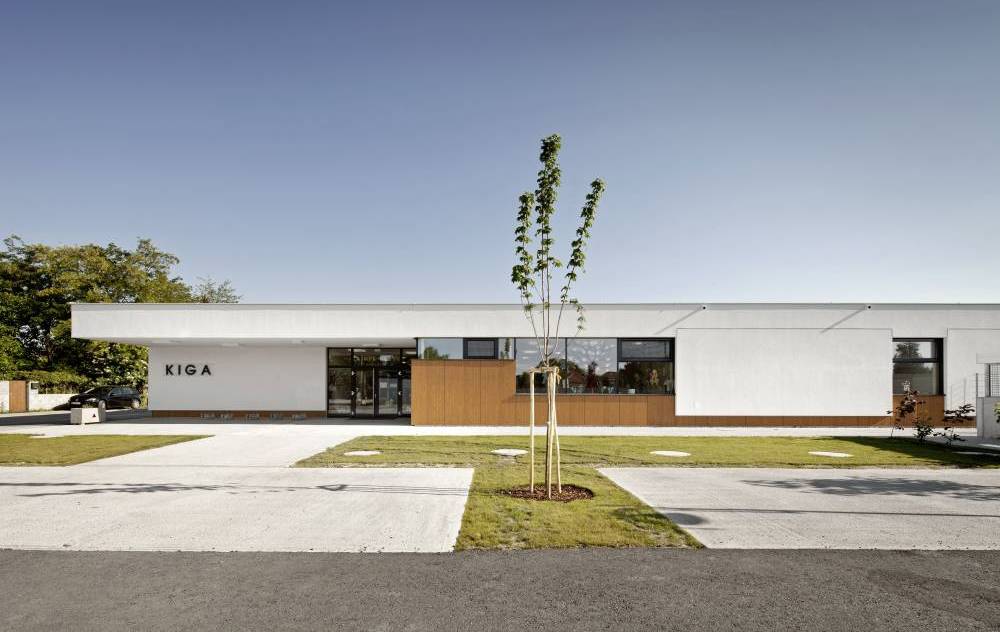 The design by SOLID architecture for the new kindergarten in Neufeld an der Leitha emerged as the winning project in an invited competition that sought designs for a new building to house a four-group kindergarten. One requirement of the competition was that it should be possible to add a further two groups without disrupting day-to-day activities at the kindergarten. 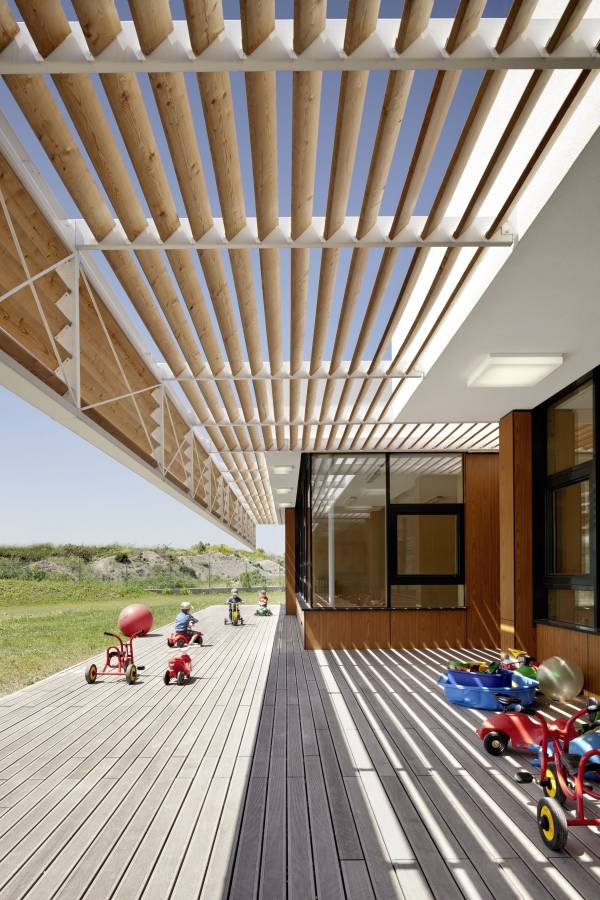 Placing the building volume in an east-west direction created clearly defined outdoor areas. Towards the north the building remains closed. The vehicular approach, the car-parking area and the entrance are on this side. As a result the outdoor spaces in the south and west, which are reserved exclusively for the children, are largely undisturbed by traffic.

The interplay of daylight and architecture is an essential element of the design. In the interior the service zones and ancillary rooms face north. An open communicative central area flows through the entire building. Towards the south the groups rooms detach themselves from the building with large areas of glazing that allow the best possible use of daylight. Incisions made in the roof together with the outdoor areas allotted to the groups form new spaces between inside and outside. Staggering the units in a north-south direction establishes visual connections between the group rooms. The open spaces ascribed to the groups can be integrated in educational activities. They are a manageable size and break down the boundaries between inside and the constantly changing outdoor area. 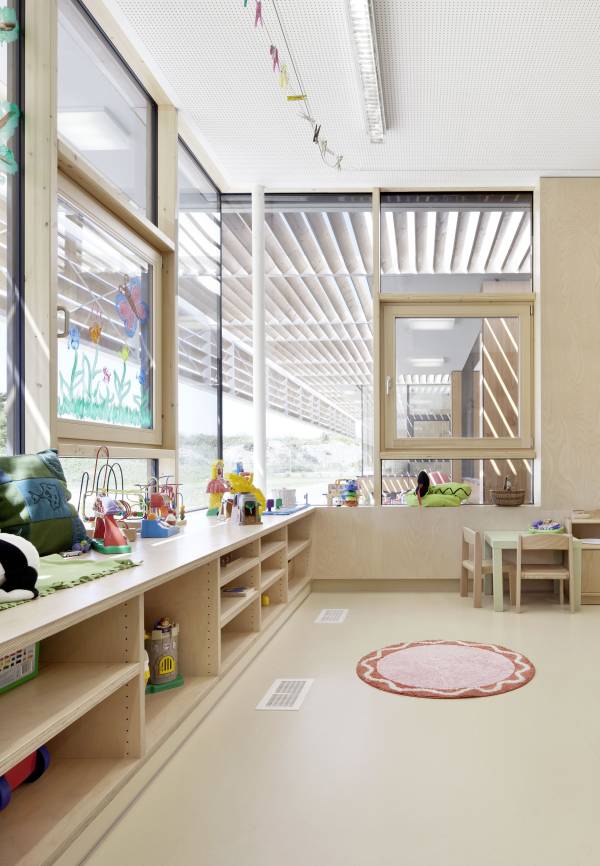 Together with its sanitary facilities and storage space each of the group rooms forms an independent unit. Glass walls, roof lights and the way the garden interlocks with the kindergarten create spaces flooded with daylight, lively lighting conditions and different moods of colour. 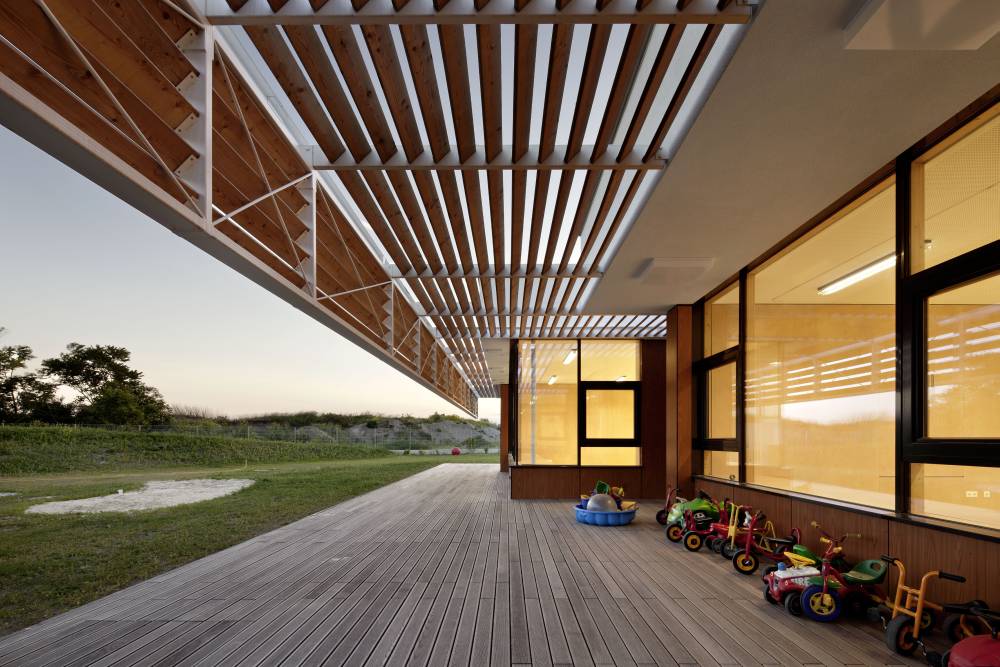 The group rooms are open in design. Clearly defined play areas, such as a building corner or dolls corner, were deliberately left out so as to allow the free combination of different play and work areas. Encounters in and withdrawal from the group are both possible. All areas are also accessible to children with physical disabilities. The dining room is positioned near the entrance and can also be used as a “parents’ café”. 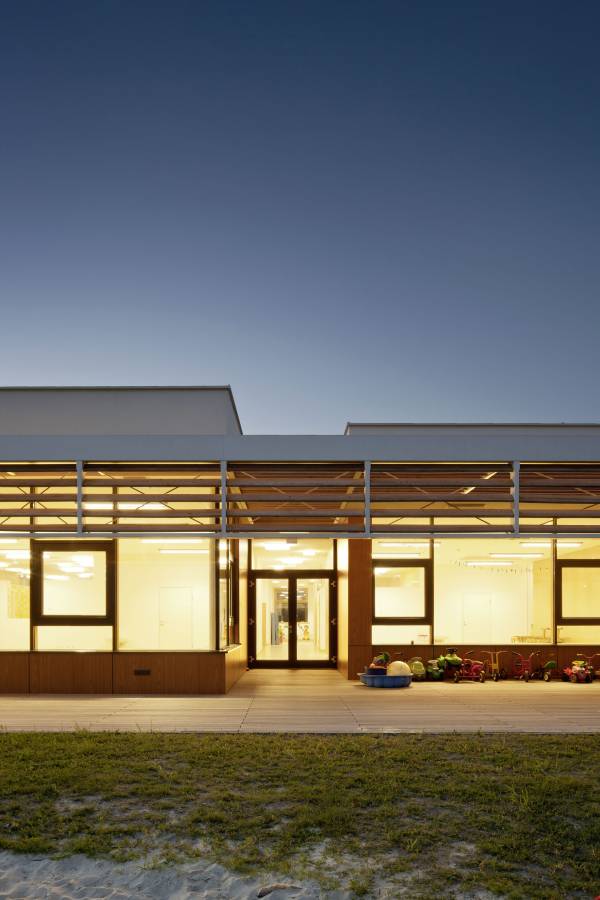 Roof lights in the large roof extending over the entire building provide light for the central zone and the sanitary facilities. In the south the roof extends into a pergola with wooden slats. This helps protect the south-facing group rooms against overheating. Together with the wooden deck below it the pergola defines a sheltered transitional zone to the garden. 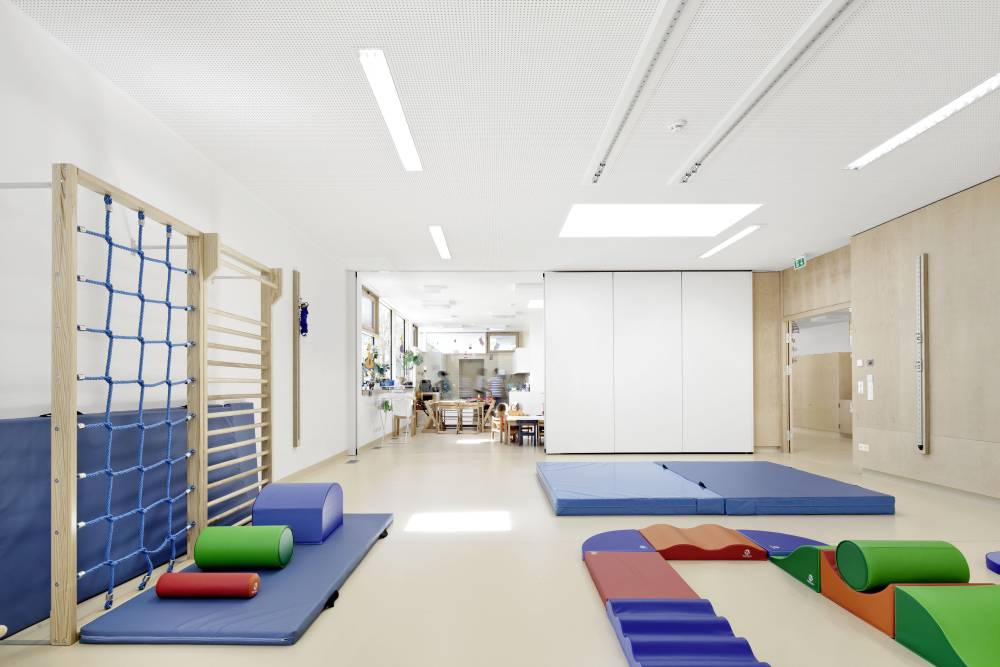 The building services concept focuses on an economic use of resources and protection of the environment. The entire building has a controlled ventilation system. The fresh air introduced via a subterranean tunnel is pre-warmed in winter and cooled in summer. Hot water is produced by means of a water-water heat pump. Rainwater seeps off into cisterns in the school grounds.