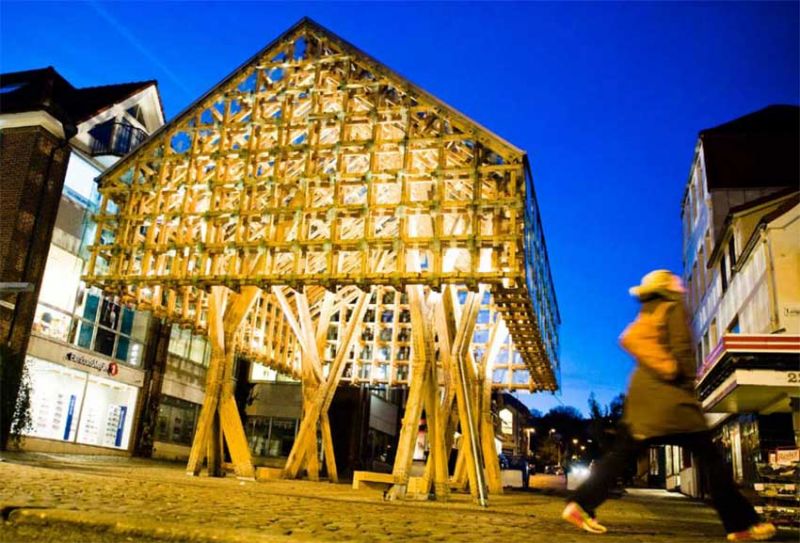 1. PREVIOUS STATE:
The second fastest developing city in Norway, Sandnes, lacked a defined identity an appropriate, recognizable image of its urbanity. The city is strongly affected by its railroad tracks splitting it in two poles, both in terms of architectural dimensions and typologies and in terms of social uses.

The historical part uphill is denser and conveys the values of domestic life: small wooden houses and small shops. The modern extension of the city towards the harbour has a wider scale and is more open though less welcoming. The issue of scale is the heart of our proposal for the historical part on the « amphi » location in Langgata, the main pedestrian road. The square’s relatively narrow dimensions were not up to the symbolic needs of this unique space, and the wish to reinforce its importance for the city’s attractivity. The starting point would be a redefinition of what public space is about: the collective spirit. We believed the people of Sandnes deserved a strong, clear but also delicate image of their urban reality: homely but looking at the future. 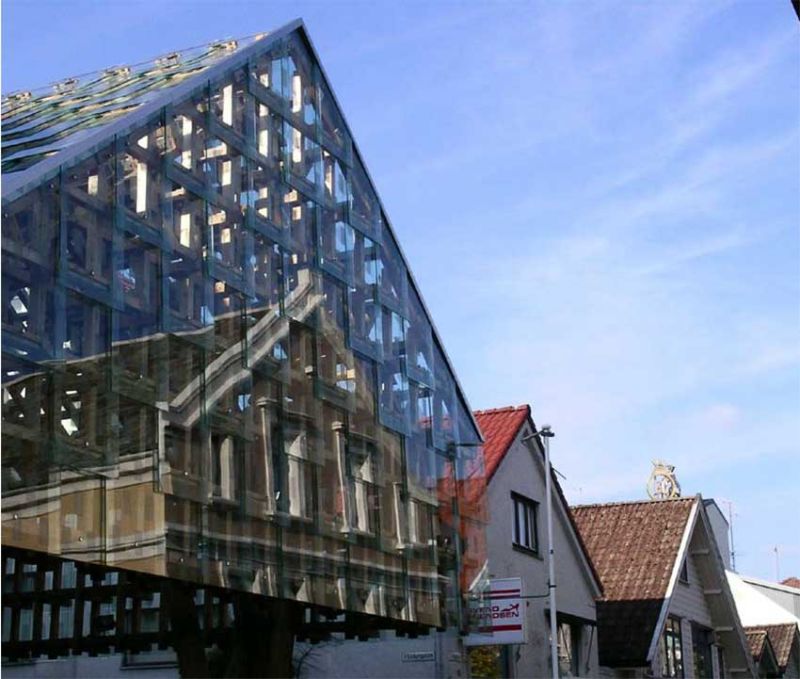 2. AIM OF THE INTERVENTION:
When Sandnes and Stavanger were chosen as cultural capitals of Europe 2008, the Norwegian Wood competitions were launched to promote innovative, sustainable timber architecture contributing to make the region an international display window for innovative and environmentally friendly architecture.

Sandnes asked for the design a new square and a sculptural object in wood in pedestrian Langgata aiming at revitalizing the area, and creating a place where many different activities could take place: a meeting point, markets, informal music concerts and other happenings. A place able to shelter, invite and invent more social events. Since the site is visible from afar, it was essential to create an object that could be experienced from distance and reveal the square. 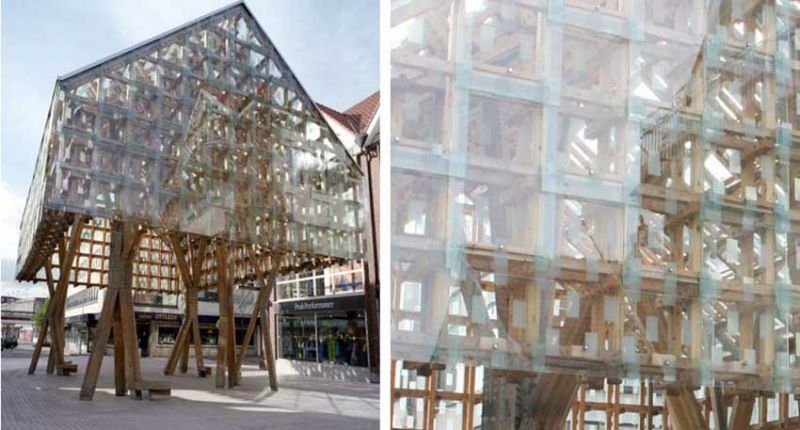 This public Lantern aimed at providing a space where to enjoy light and weather changes if nothing else takes place. And if there is always something happening, on account of the Lantern, more will happen: creativity calls for creativity. The international competition was won by the French-Norwegian team AWP + Atelier Oslo. The proposal used the iconographic shape of and old wooden house. By the redefinition of its traditional construction and by making it glow in the dark, a new landmark for the city was created. A new ground has been opened. The Lantern proposal displays an open roof of such dimension that it becomes the symbol of this binary city. This roof is the motive of a house shell: a symbol of the old city upscaled to the new city’s dimensions, dealing with the Norwegian wood ancient architecture motives to design a contemporary object.

The Lantern is:
// a manifest for public space design : not just a decoration, but an urban strategy;
// a tree-like shaped structure creating a micro-climate, a welcoming urban micro-forest ;
// an inspiring atmosphere to sustain the existing practices and encourage new experiences.

3. DESCRIPTION OF THE INTERVENTION:
Glass:
The glass panels are mounted in an overlapping pattern, as in a traditional slate roof. The overlap incorporates eventual movement between the panels. This allows the glass to be mounted directly onto the wooden structure, avoiding the typical steel profiles and substructure. A translucent pattern is printed on the panels, to both capture the light, and let it through to play in the wooden structure beneath. A light, abstract feeling is achieved, adding to the depth and reflection qualities of the whole. 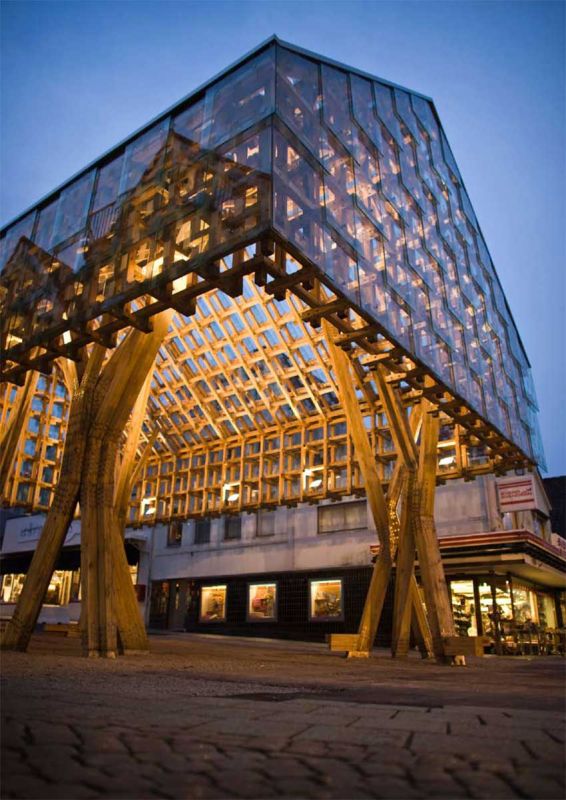 Roof:
As well as having an iconographical and recognizable shape, the roof provides an ever-changing experience for the daily passers by. The roof stretches out to capture the sun; light is filtered through the depth and translucency of the structure. In rainy weather rolling clouds are reflected in the glass. At night, the whole pavilion glows like a lantern.

An abstract and lightweight sensation is achieved through the uniform structure, where there is no division between primary and secondary elements. It is a double grid made solely of 90x90mm wood members. Where needed, additional elements are added within the system. The material of the roof construction is laminated pine with steel reinforcement in the joints. 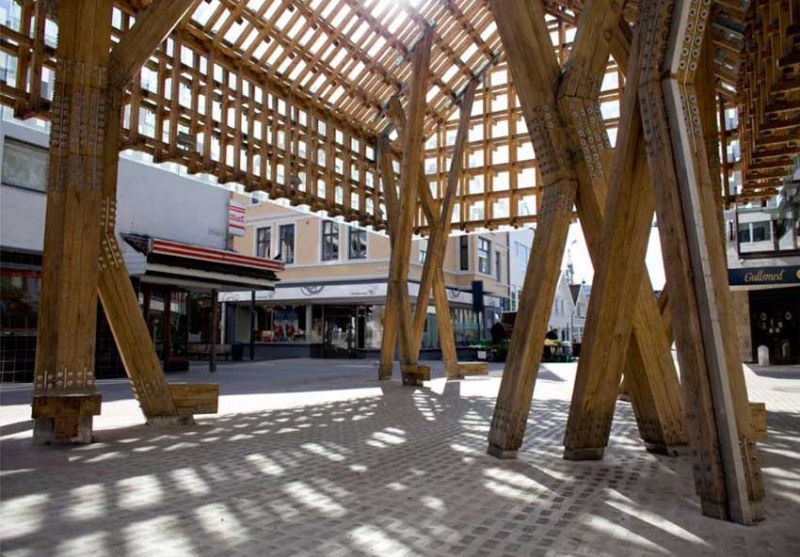 Columns:
The roof is held up by four groups of columns, creating a flexible space, open for different interpretations and activities. The columns are individual and sculptural, and in contrast to the simple shape of the roof, create different informal spaces. In some places the columns turn into benches when meeting the ground. The columns are withdrawn from the edge of the roof, both to be protected from the rain, but also to blur the sensation of when the users are covered or not. With inspiration from gothic principles, the continuity of the structure is shown from the ground to the roof. The material is massive oak with steel reinforcement in the joints.

Ground:
The ground has been designed as a carpet offering the base for the most varied uses. This carpet is made of different samples of resistant concretes, based on different ways of building in this climate.