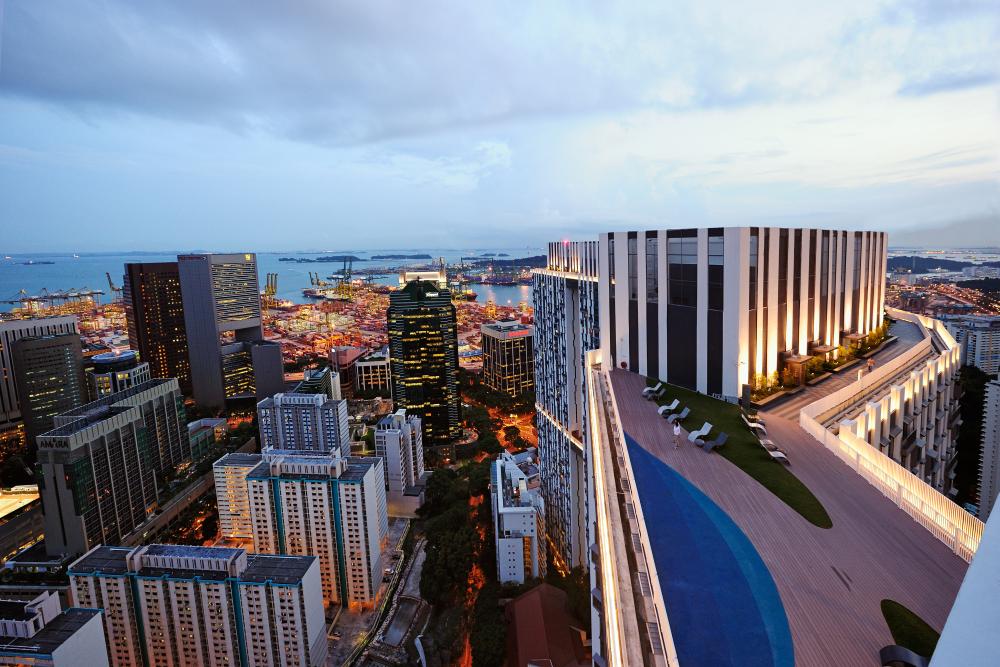 Architects’ Statement:
Soaring at 50-storeys, The Pinnacle @ Duxton redefines high-rise high-density living and challenges the conventions of public housing as an architectural typology. The project addresses pragmatic, financial, social issues, and responds sensitively to a myriad of planning constraints. It boldly demonstrates a sustainable and liveable urban high-rise high-density living and initiates an innovative typology of public communal spaces that are metaphorically reclaimed from the air.

The constraints of an irregular-shaped and tight site of 2.5 hectares in the prime central business district area required an efficient and clear block layout that addressed the length of the westerly-facing site. In response, seven tower blocks housing 1848 apartment units are placed in the most open and porous way, creating urban windows that frame the city skyline. With this manoeuvre, the layout eliminates overlooking between units; optimizes views, connection, air and light flow; minimizes Western exposure to reduce solar heat gain; and includes the conservation of historical trees. A large forecourt for the towers was created, maintaining visual connectivity with the existing Tanjong Pagar Community Club, which is a major community node for this neighbourhood. 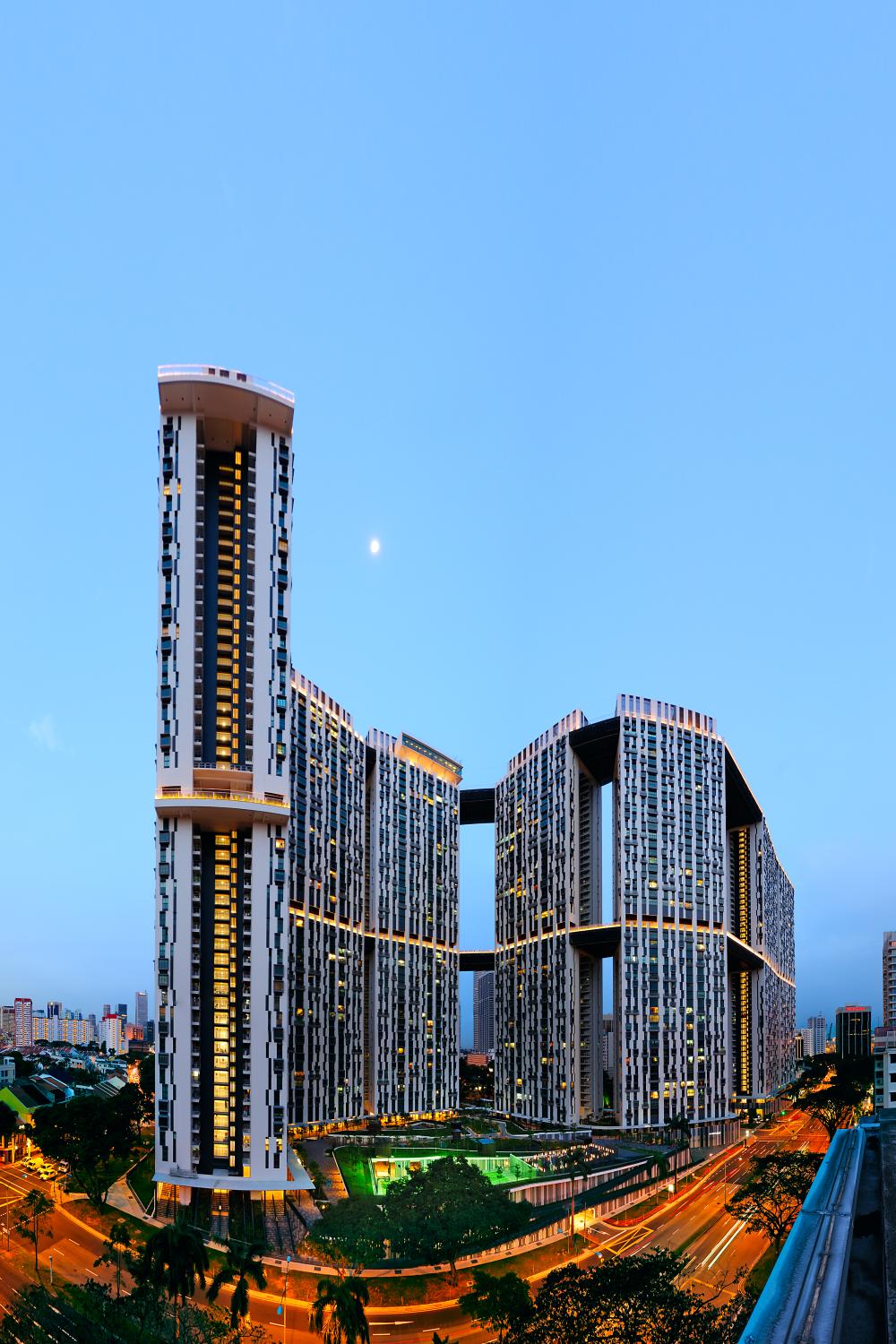 Within the development, residents enjoy the convenience of shops, a food court, an education centre and a childcare centre, and two residents’ committee centres. Beyond the development, residents are served by two train stations which will link them to the island-wide mass rapid transit system; bus stops at the development’s doorstep and a bus interchange depot; amenities like a police complex, hospital, restaurants, pubs, cafes, and shops – all within a 10 minute walking-radius. Exploiting the inherent sustainability of the high density high rise housing model, The Pinnacle @ Duxton creates a walkable and diverse community, and provides a connected, convenient and compact model of sustainable urbanism. 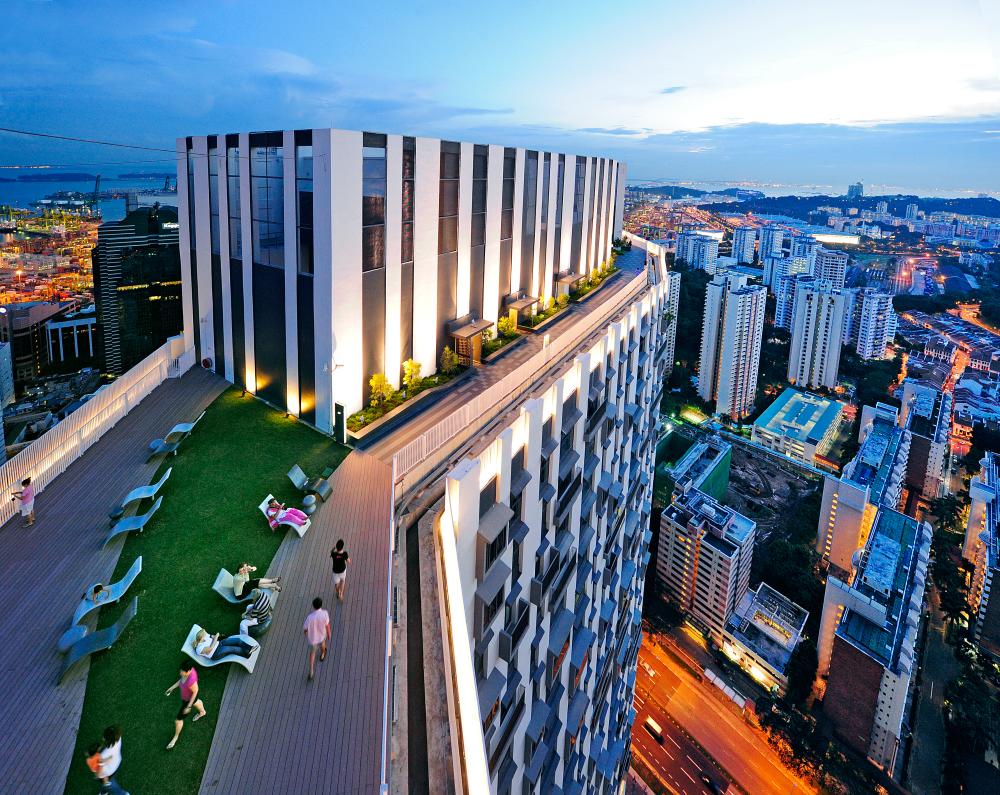 New Ground
On the ground, a new architectural surface warps, peels and flows over the carpark and services, efficiently organizing vehicular and pedestrian circulation. The linear block layout allows for a direct services network in the car park; a double-volume carriageway running under the blocks accommodates the fire engines and waste disposal. The peripheral arrangement of service cores allows for the car park to be efficiently and clearly laid out. 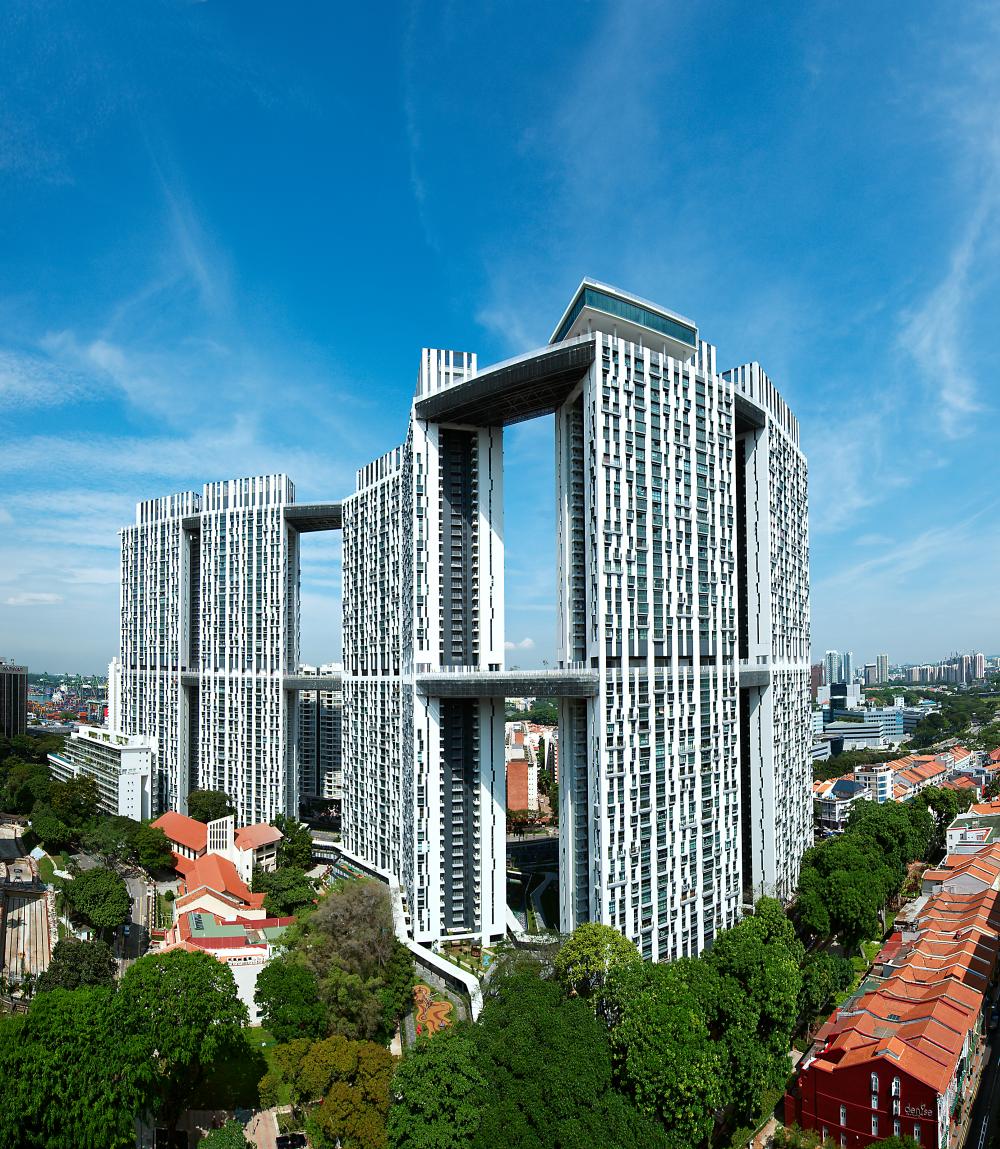 The new architectural surface is a lush environmental deck that connects strategically with the existing urban network while forming a green lung for the city. Layers of tree screens border the site and pathways to provide varying degrees of opacity and privacy, softening the massiveness of the towers, creating a human scale. Multiple layers of pathways, connections, and landscape bands are created, recognizing the option for residents to take a fast and convenient way home, or a slow and relaxing path for recreation. A covered linkway band provides uninterrupted connection from both ends of the development and also function as a buffer against killer litter. An extension of the Duxton Plain Park, this raised new ground is a plug-in to the island-wide park network and functions as a social dynamo where social activities are emerged. Landscape elements comprising pavilion, benches, and exercise nodes are plug-ins to this extended park network and function as location markers as well as vibrant community nodes. Integrated within this landscape is an outdoor gallery ‘Traces’ which poetically captures, with the concept of an ephemeral light ruin, the historical significance of this site by tracing the outlines of the original two public housing blocks which were built in the 60s.

Sky Gardens
On the 26th and 50th storey, continuous Sky Gardens weave through the seven tower blocks, forming a simple yet powerful sculptural skyline that creates a strong identity for the project. Twelve Sky Gardens are conceptualised as displaced landscapes like a Sky Gym, Hillock, Crater, Meadows, Lounge, Beach. They function as an extension of the living environment for residents, forming almost 1 hectare of new land. Designed with children playgrounds, an outdoor fitness gym for the elderly, landscape furniture resembling beach deck chairs and outdoor sofa sets; they provide diverse, creative and unusual spaces for community interaction. They also function as areas of refuge during fires and allow the sustainable sharing of mechanical services, reducing seven sets to just three. The seamless connection created by the linking Sky bridges allow for the entire development to be serviced by a single Building Maintenance Unit. 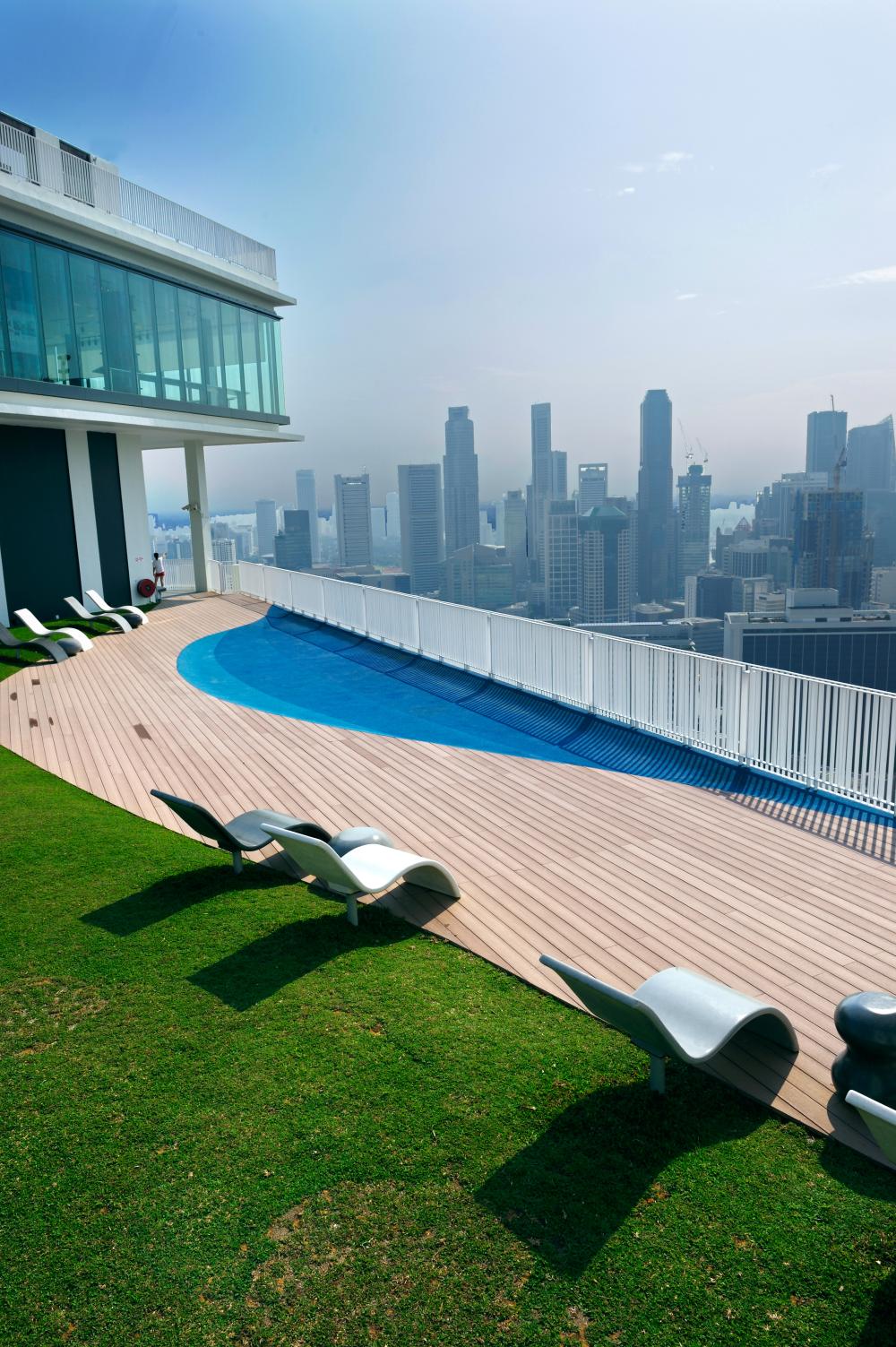 Units
The individual apartment unit is designed with growth of the occupants in mind – from newly-weds to homes with kids, then teenagers and later grandchildren. The pre-cast flat slab system and structural column zoning allowed the flexibility of wall placement in lightweight concrete, which extends 400mm on either side of the grid – thus rooms can contract or expand to suit the occupants.

Facade
Efficiently constructed off-site, the pre-fabricated concrete building components were delivered and put together on the tight site. Residents were given an unprecedented choice of exterior facade treatments – planter boxes, bays, bay windows, windows, and balconies. The facade is atomized into modular panels strung together to form seven sets. Composed by simple rules akin to Bach’s musical fugues, the layered sets form a complex facade. The pre-fabricated panels incorporate both structure and services. These include columns, beams and service ducts. With a simple and affordable application of paint finish, a highly differentiated façade is created from an undifferentiated fabrication process – creating visual delight and reducing the perceived building mass.

As a public housing project, The Pinnacle @ Duxton addresses concerns for security, maintainability and cost-effectiveness, and displays sensitivity to the relationship between high-rise high-density living and the human scale.