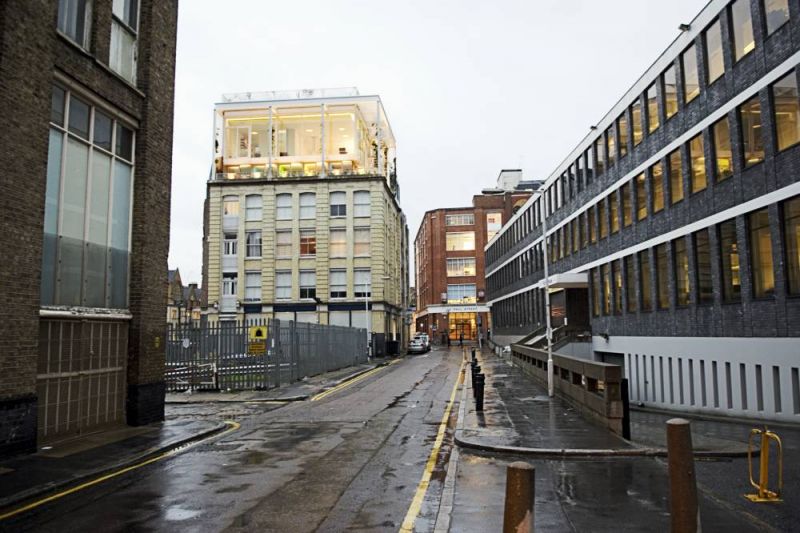 On top of a warehouse in Shoreditch an empty roof overlooked the city. The brief was for a six-bedroom family house with outdoor spaces that maximised the potentials of the site. The owners wanted a place for the family to grow that would bring life and greenery to the Shoreditch cityscape. As we green the city it becomes a desirable place to settle, where people settle the city in turn flourishes. 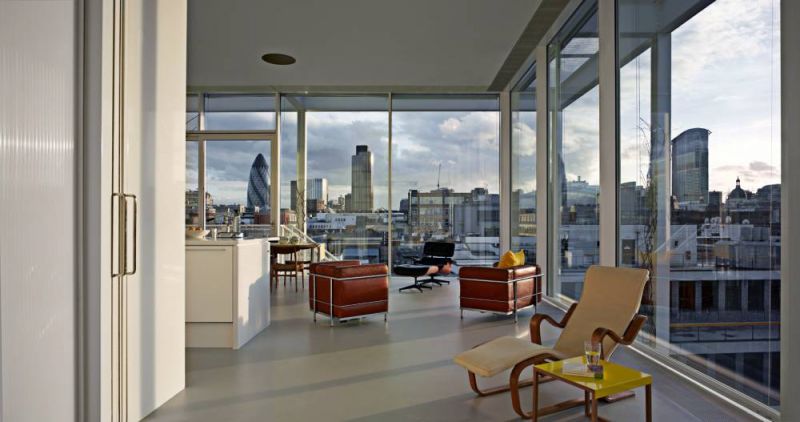 Light on the Heavy
The existing brick warehouse structure was damaged and rebuilt after the war. The central columns were not adequate to take any additional loads. The load of the new building had to be delivered to the perimeter walls. From a ring beam at roof level the structure grows up to forms a transfer structure at high level from which the new building is hung. On the gable and party walls and within the floor slabs the frame is braced within the timber substructure. To the south and west a 7m tall loggia is formed by the external structure, framing the view of the city. 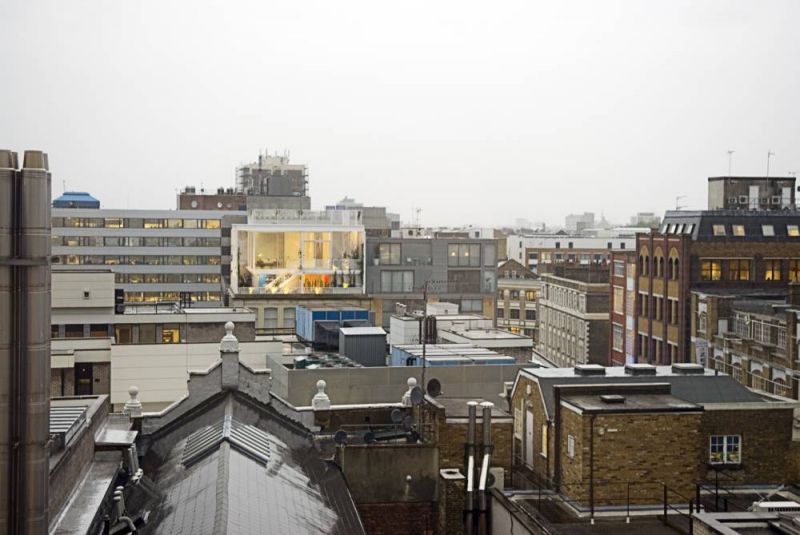 Seasons and Change
A fine white mesh covers the galvanised steel rain-screen cladding. The steel mirrors the changing colour of the sky while the mesh captures light and shadows. Used internally and externally, the mesh is also an armature for fragrant climbers planted around the building perimeter. Openness and height enable the main interior space to readily register the ever-changing light of the sky. The muteness of the materials allows the movement and light of the interior to become part of the cloudscape. 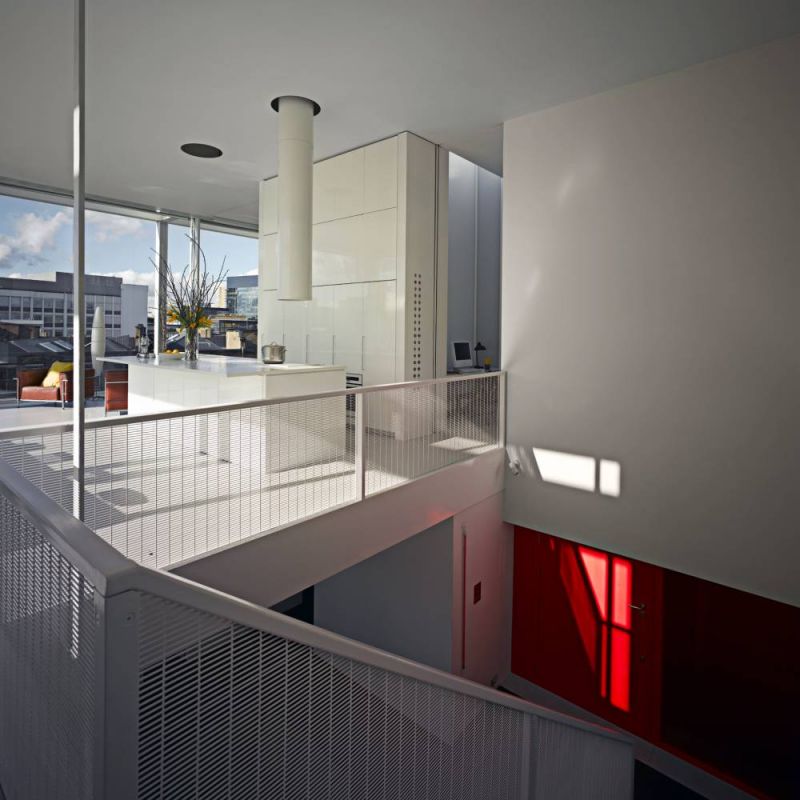 A Family House and Garden
The house is entered via a bridge that comes from a neighbouring building. The lower floor is divided into 5 bedrooms and a play area with a sunken conversation pit. All the rooms open out onto a terrace enclosed with planting. The main living space is a tall room on the upper level. In the centre of the space a tower, housing the polycarbonate bathroom, rises up through the structure to bring in light. Patterns of rain are projected onto the floor by lighting the skylight from the roof level. To the west the master bedroom can be closed off with a giant sliding door. The kitchens and bathroom are fabricated from standard components purchased from IKEA. A cantilevered balcony overlooks the city to the south. A spiral staircase leads up to the green roof, the solar collectors and a large roof deck surrounded by fragrant planting. 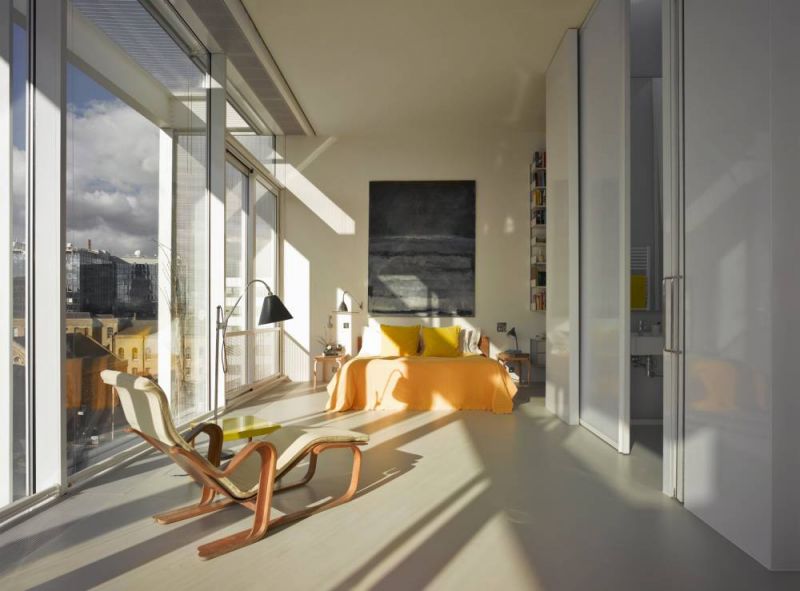 The Breathing Room
The south and west glazed sides are argon-filled double glazing units. Floor and ceiling grilles ventilate the space. In the summer, cool air rises through the floor grilles, filling the room with the scent of jasmine. Hot air rises through the ceiling and is pushed out through automated flaps in the facade. In the winter, perimeter trench heaters heat the space through convection. The orientation of the glazing maximises solar gain. In the summer the gain is offset by external blinds and seasonal shading provided by the wisteria. Other environmental features include solar collectors, rainwater harvesting, green roof, super insulation and condensing boiler. 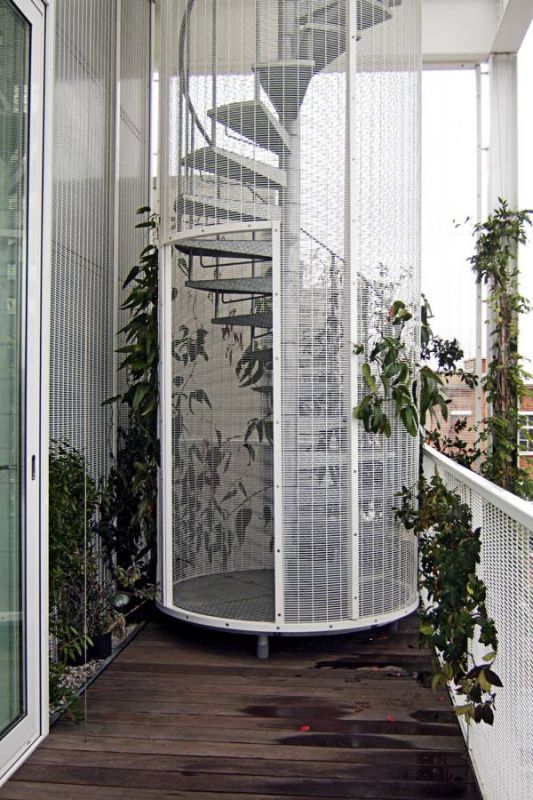 The Passage of Time
The project took five years to come to fruition. Complex issues of ownership, air rights, and access lead to protracted legal and purchase negotiations that delayed the project by several years. During this period the building grew into its final form through tight budgetary control, three planning applications, and numerous planning amendments. The simple form grown out of this process has become a framework in which to witness the passage of time. The house is a barometer of the cycles of change, at the scale of the distant growing city, and the scale of the leaves.