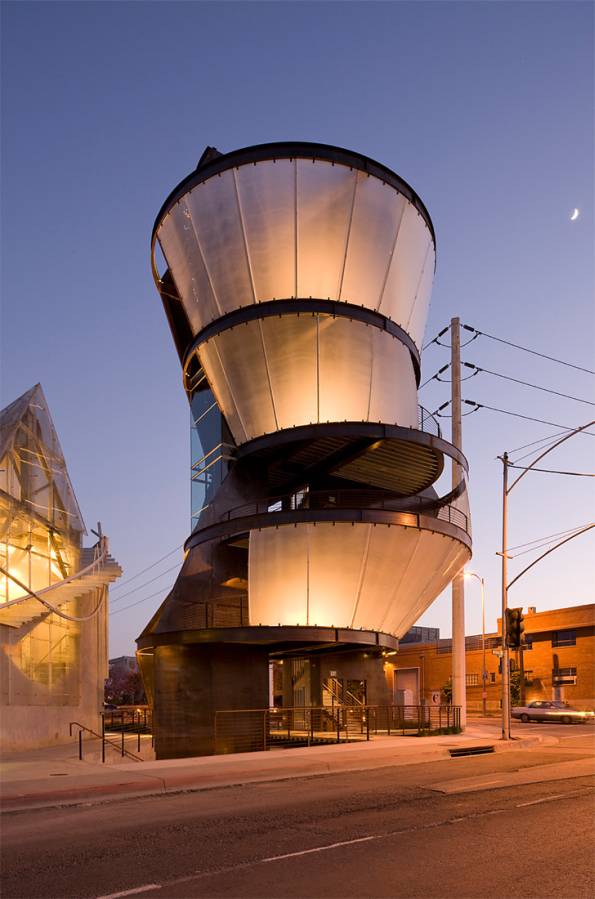 The Samitaur Tower is an information tower, constructed at the corner of Hayden Avenue and National Boulevard immediately across from the new Expo light rail line arriving from downtown Los Angeles in June, 2011. That intersection is the primary entry point into the re-developed zone of Culver City.

Conceptually, the tower has both introverted and extroverted planning objectives. Internal to the burgeoning site area of new media companies, graphic designers, and general office tenants, the tower will symbolize the advent of this important new urban development, provide a changing art display for local viewing, and offer a variety of graphic content and data on its five screens concerning coming events and current achievements of the tenants who occupy that part of the city. 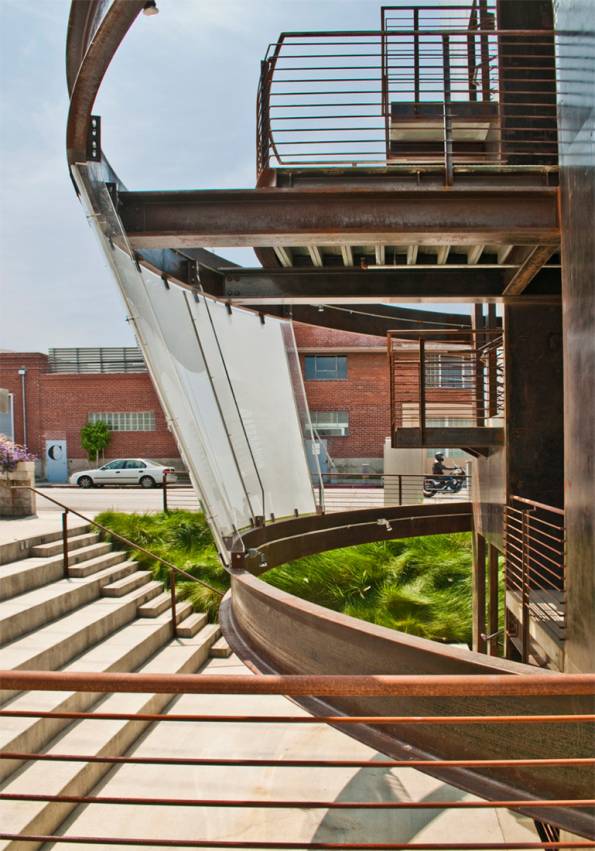 Externally, the tower displays culturally significant content and local event information, along with art and graphic presentations of all sorts available to in-car audiences who pass the site area, traveling on a number of local thoroughfares in the Culver City / West Los Angeles area. In addition to the large number of cars passing the site, the Expo Line has an estimated ridership of 30,000 passengers per day with two local stops several blocks east and west of the site. The presence of the train riders guarantees an enormous daily audience of Tower art viewers, as well as an increase in pedestrians in the area, who will walk past the Tower from the train stops to local businesses. 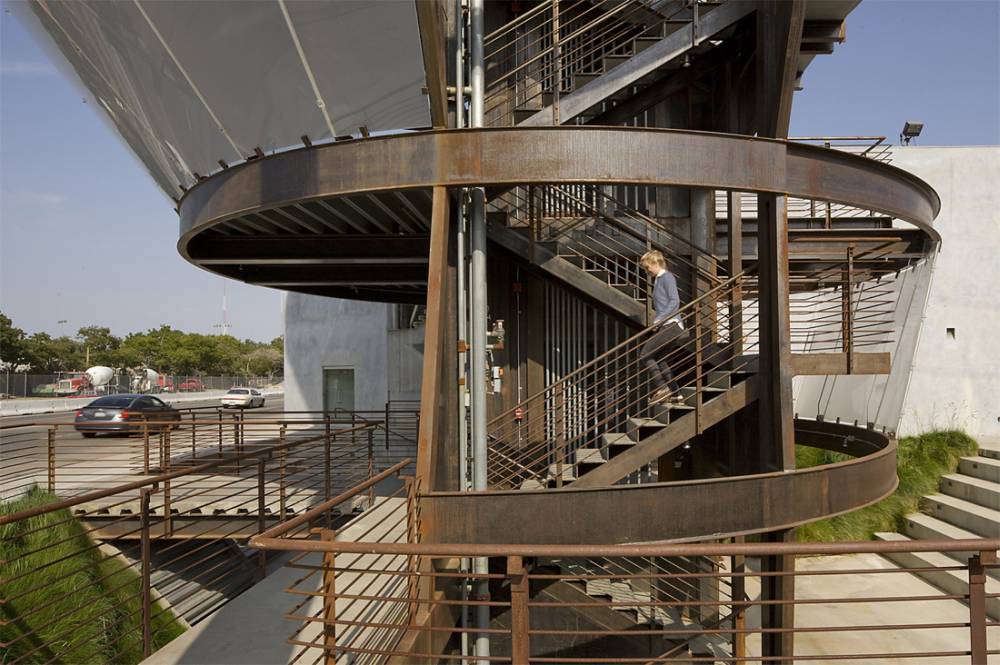 All the buildings in the immediate area are governed by a 56 foot height limit. The Samitaur Tower height is an important exception to the local height rule. The project is 72 feet high, measured from grade, and includes an open-air, excavated, concrete seating and staging space at its base that begins at minus 12 feet, and housing for all the electronic and media related equipment for the Tower. 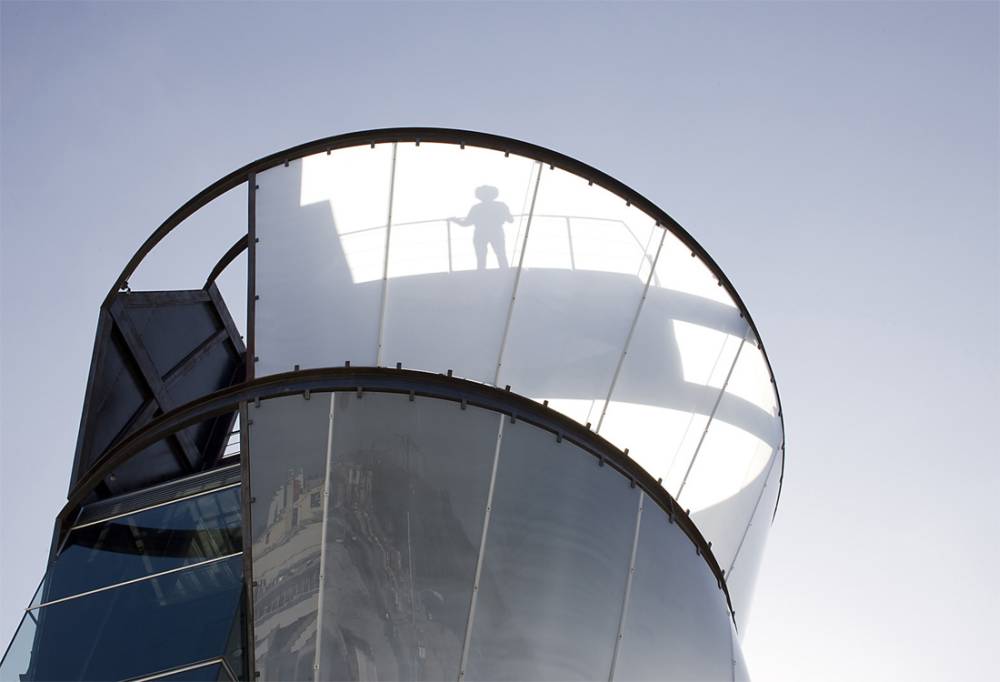 The tower consists of five circular steel rings, approximately 30 feet in diameter. The rings are stacked vertically at 12 foot floor-to-floor intervals, and, as the height increases, the rings are staggered in plan, back and forth – to the north, east, south, and west – in order to establish proximity and viewing angles for various levels at various heights. Projection screens at each floor are to be seen from cars on surrounding surface streets, from freeways, by passengers at train stops, from on-board the moving trains, and from area pedestrians at a variety of key walking and viewing points. Between each pair of staggered horizontal circular steel planes, the curving, conical projection screens are installed. Behind the screens, hung from the tower floors are a number of digital projectors, 10 in all, that will rear-project onto the translucent acrylic screens. 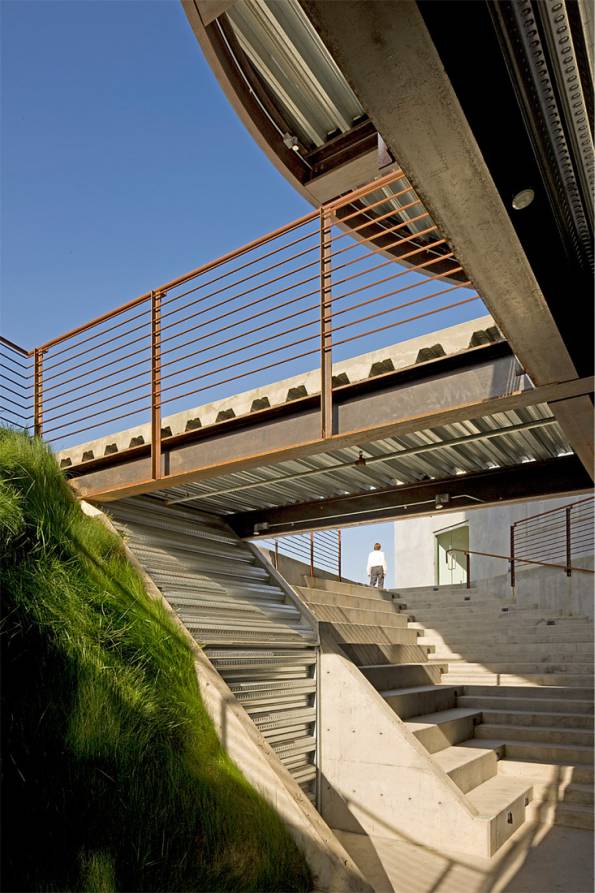 Inside the screens, steel decks are provided for viewers to look out at the city, and for a maintenance staff who will service the projectors and screens.

The Tower has a glazed elevator in an enclosed glass shaft, and an open stairway to the top, so the Tower will be used as a viewing platform to overlook the city, but its primary objective is to distribute art and other relevant content to the local and the in-transit audiences passing by. 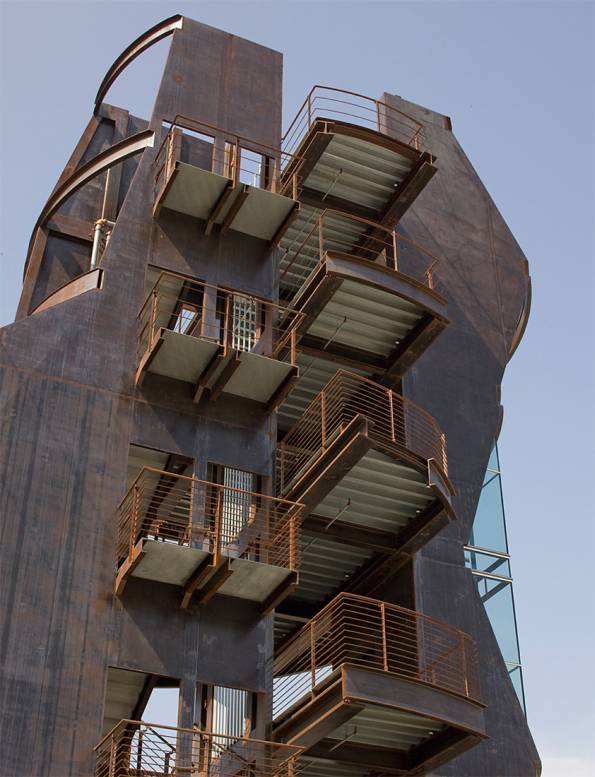 There are several target audiences that account for the positioning of the five screens. First is the traffic on the Santa Monica Freeway, several blocks to the north, one of the most highly trafficked freeway routes in Los Angeles. Second, the intersection of La Cienega Boulevard and Jefferson Boulevard, several blocks from the site, another of the highly trafficked intersections in the city, and the location of the primary new, elevated train stop. Third is the corner of Hayden and National itself, adjacent to the project, which is also a signaled, highly trafficked east-west route. Finally, there is one screen, just above grade level, that, unlike the other four, faces the re-development site. That screen will be used by local audiences, seated on the terraced concrete bleachers that step down to the below grade portion of the project where a stage for speakers and performers is provided.