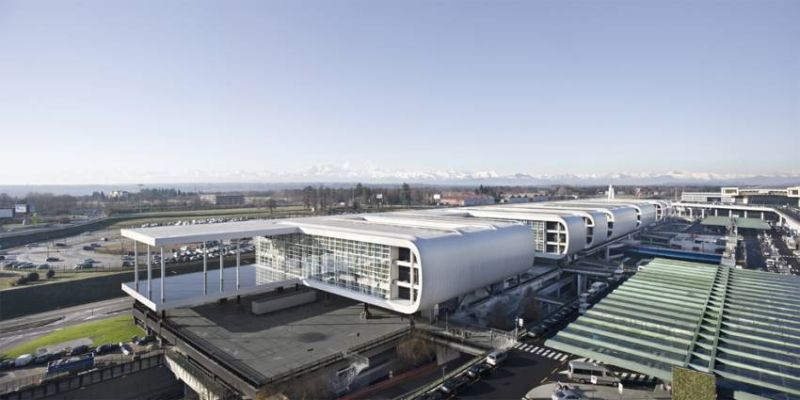 Architects’ Statement:
We were commissioned to design the exteriors of this large hotel in front of Malpensa International Airport as a result of our competition winning entry for the overall design of the building. Despite its size (420m long, 64m wide, 21m high) the building was conceived as a design object. Partly because Milan is Italy’s design capital, and partly because we were interested in investigating the technical and architectural properties of a skin or membrane to be perceived dynamically as façade not only on its four sides but also the roof- visible from the access road to the airport complex. 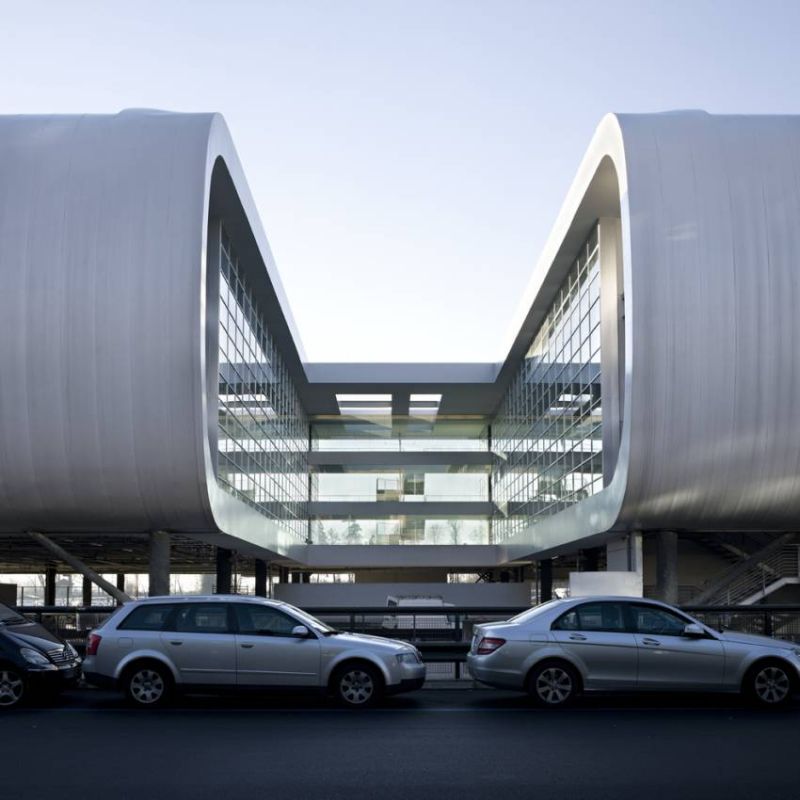 The hotel itself is set on an existing base consisting of a huge car park over the railway that passes underground. The hotel has 436 rooms, a conference centre, a spa accessible directly from the airport via an existing connecting bridge over the surrounding ring road. 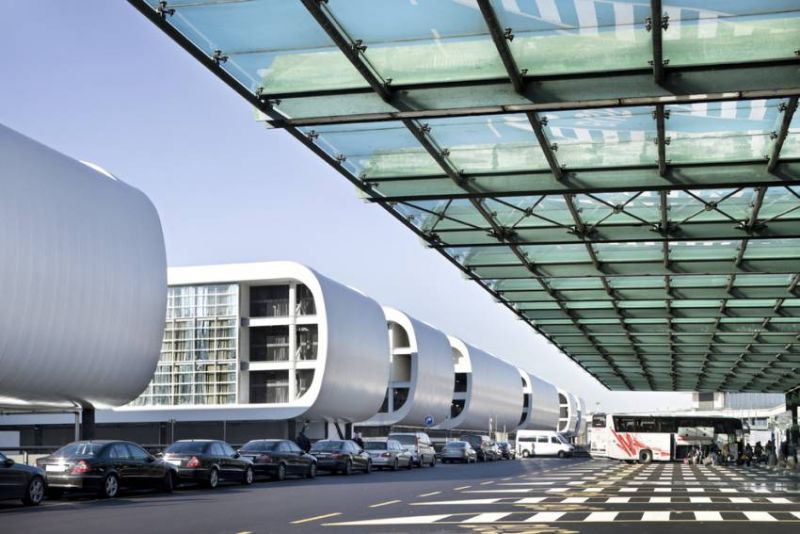 Membrane:
We were looking for a seamless shell to fold around the functional volumes of the buildings. After researching and detailing a number of alternatives titanium zinc sheeting, Corian and similar solid surfacing, sprayed polyurethane damp-proof membranes, and waterproof concrete-resin based finishes- we finally opted for pultruded fibreglass panels. Pultrusion is a manufacturing process combining extrusion and pulling fibreglass through a die that can provide panels up to 1400mm wide and almost infinite lengths- we needed lengths of up to 25 meters. 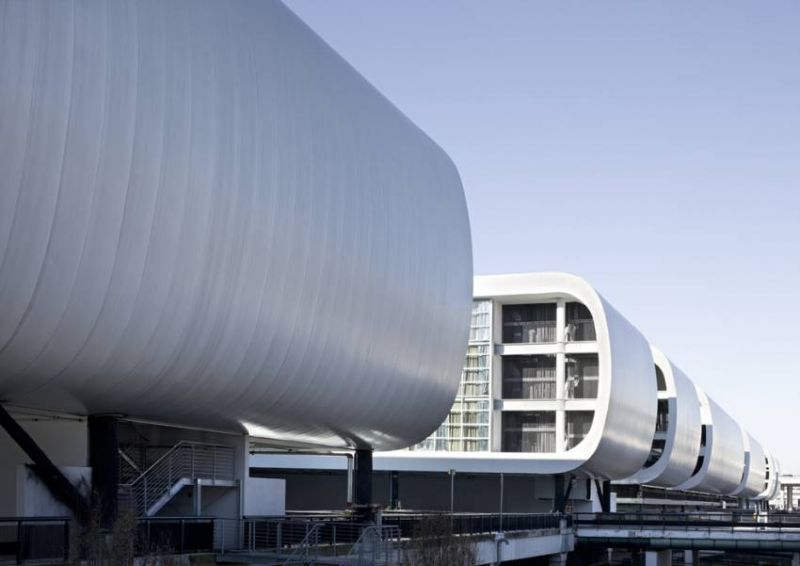 Aside from the lengths of the panels, the material has a series of qualities highly suitable for building:
it is lightweight, elastic, very stable in extreme temperatures (-20°C to +50°C), fireproof and waterproof. Reduced costs and construction times coupled with the inherent qualities and finish of the material have proved to be decisive in achieving the desired result in this project. This material is more often used for industrial products and so an enormous experience of precision detailing to tight tolerances has been accumulated over the years which came in very useful in the detail design of the membrane. 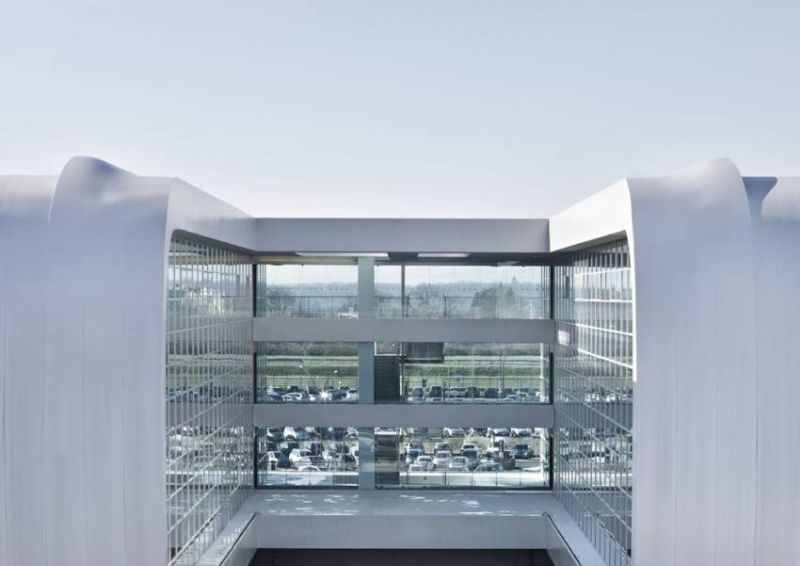 The shell is curved around a subframe of pultruded structural profiles and steel arches, wrapping the entire length of each bay, or module of the hotel in a smooth, continuous skin. The length of the hotel comprises seven bays separated by courtyards, with the curved façades facing the airport, and the rooms looking out on the courtyards. The almost flat roof, is treated as a façade to be seen from the airport, with openings onto terraces, light-wells or interior courts. The plant extracts and ventilation “breath” through vents twisted out of the roof membrane. 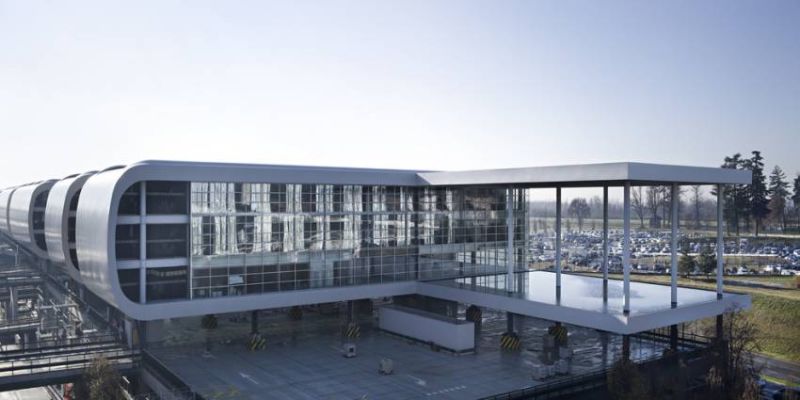 Façade:
On the open (west) side these blocks of rooms articulate the façade in an irregular sequence of solid and void. The solids in turn are articulated by a series of thick sculptural PVC blackout curtains which give both depth and dynamic to the overall elevation. The folded shell alternates with the glass transparency of the enclosed volumes in which the reflective curtains mirror the external lighting conditions to produce a building that is constantly changing aspect. Though normally considered an item of interior design, the black-out curtains were seen as an integral part of the façade from an early stage. The regularity on the mullion and transom grid is syncopated by the irregularity of the curtains seen through the extra-clear glass. 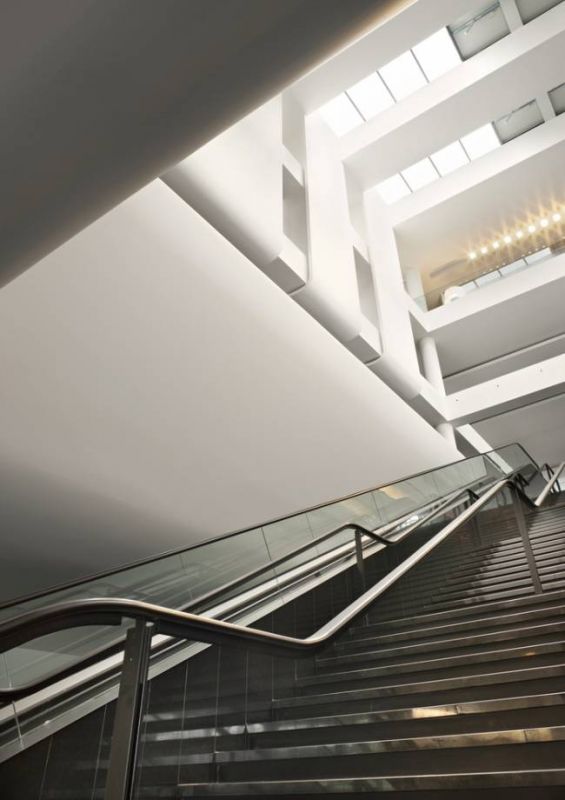 Dynamic:
The movement of people as they arrive and leave the airport, the tension created between solid and void, curved and straight line, the play of light reflected off and through the building , provide a variation of views and give a dynamic to the architecture that were looking for. Escalator connection between ground and main floor lobbies The escalator block was also considered as an element of the architectural volume rather than an aspect of interior design. 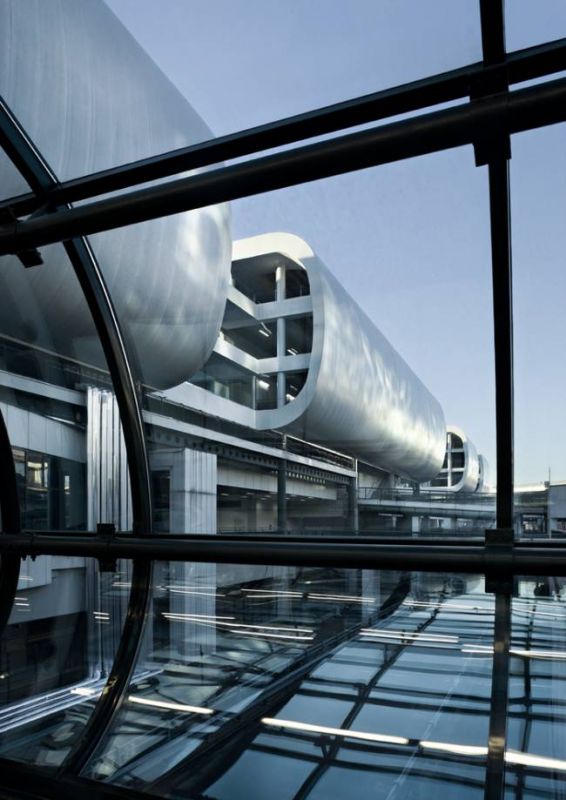 The central portion of the whole building needed a visual and volumetric connection between the ground floor entrances, from/to the railway and the main car park to the west, and the main entry lobby from the airport 9,61m above. This is achieved by taking the lower edge (at +6,25m) of the shell enveloping the whole building and pulling a section of it down to the ground (at -3,30m) at though it were elastic. The volume created contains the escalator block. From the inside the escalators catapult the visitor to the first main level of the hotel opening into a full height void topped by large light-well. From the outside the volume strongly signals the western entrance to the building with connections to the railway below, the airport behind -on axis, and the hotel above. 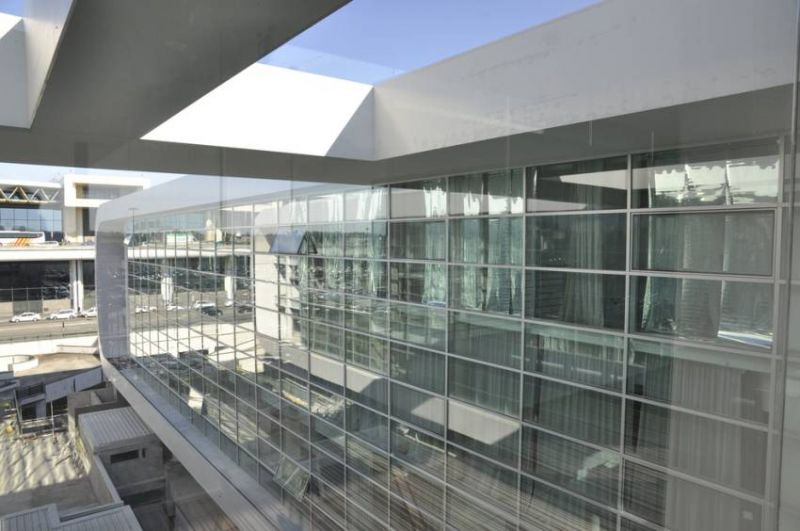 Tensile Structures:
Between each block of rooms the emergency staircases, also seen from the airport side through the transparent corridor links, will be clad in a tensile structure (to be built in the coming months). Stretching over the staircase and between the blocks, this essential component completing the design of the western façade with its sculptural organic form, bonds the parts together and gives a tension to the overall composition.