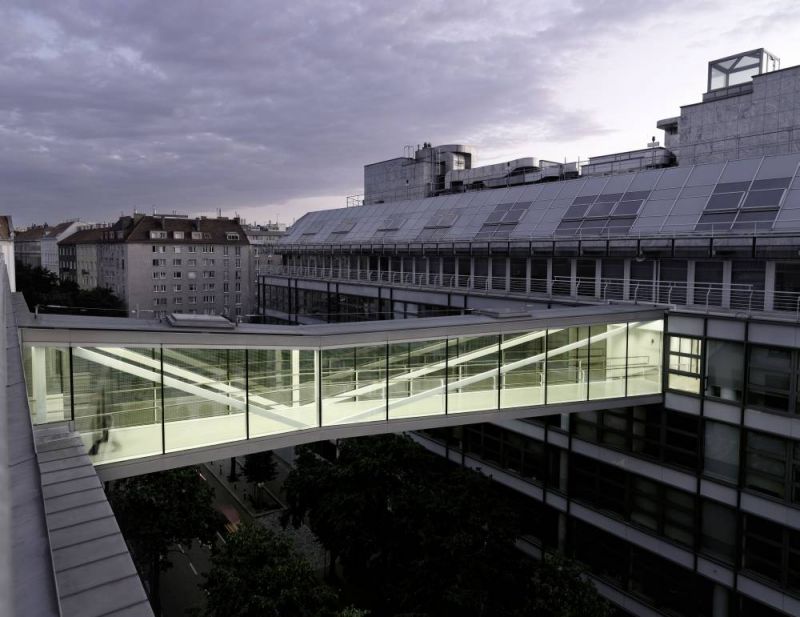 SOLID architecture designed a bridge that is enclosed on all sides to connect the two buildings Rennweg 44 and 46 at the fifth upper floor, 17 metres above the Kleistgasse in the third district of Vienna. The bridge with a span length of 22 metres was completed in May 2009. 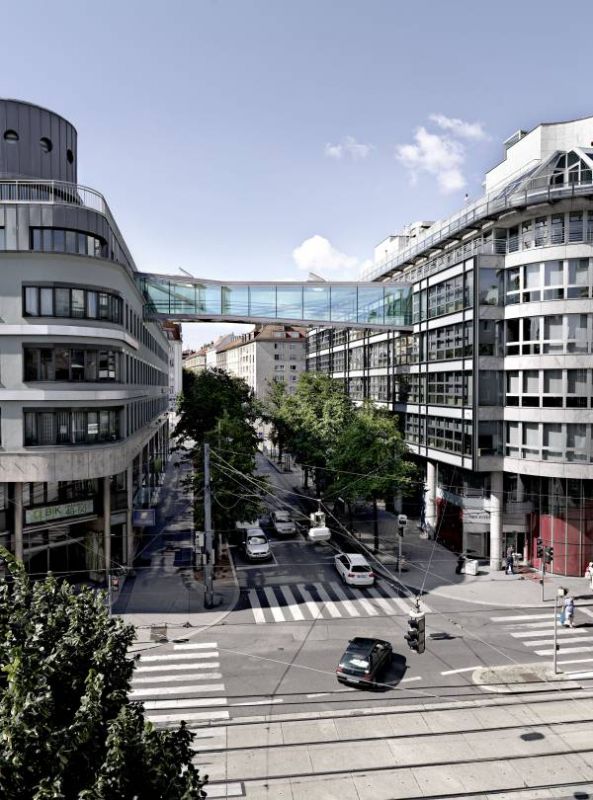 Architecture
In reference to its outward appearance, the bridge adds a third and formally individual element to the two existing buildings dating back to the 1980ies. The fair grey metallic colour of the exterior surfaces of the bridge assimilates with the grey-green colour spectrum of the two already existing building structures. 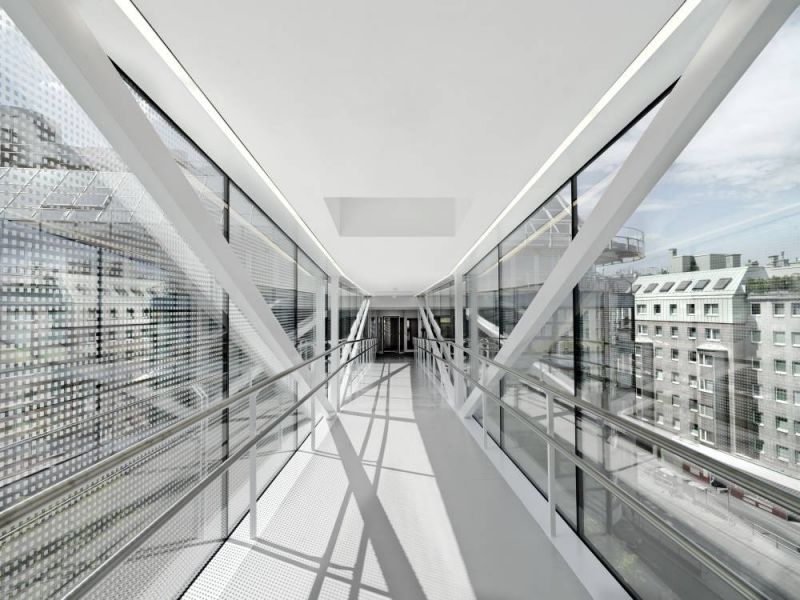 Large-area glazed sidewalls make the supporting construction of the bridge, which is arranged inside, visible from the outside, and they make the bridge appear light and transparent.

The interior area of the bridge has its own individual character, independent of the two already existing buildings.
If you cross the bridge, you will experience space that is dominated by the dynamic alignments of the supporting construction and the bottom and top plate. There may also be made out a colour difference between the interior area of the bridge on the one and the existing building structure on the other side. With the exception of the fair grey floor, all surfaces are white. 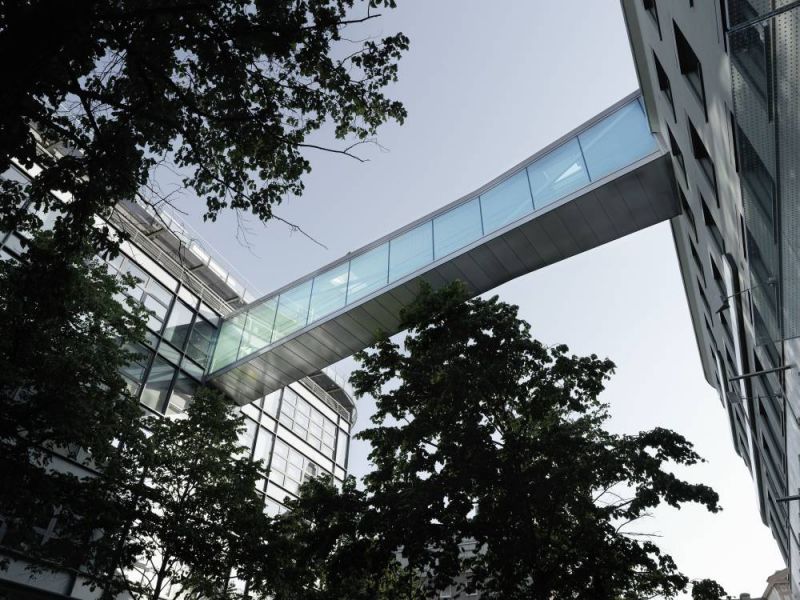 Extending from the building Rennweg 46, there is created a horizontal plane into the road space, 17 metres above ground level of the Kleistgasse. From this horizontal area, there is presented a wonderful view onto the road space situated beyond and as far as the towers of the Arsenal. Following a bend in the botton plate, a slightly inclined ramp counterbalances the difference in height between the two building structures and leads into the building Rennweg 44. The construction of the details is reduced and simply supports the view and the atmosphere and the effect of the space created. 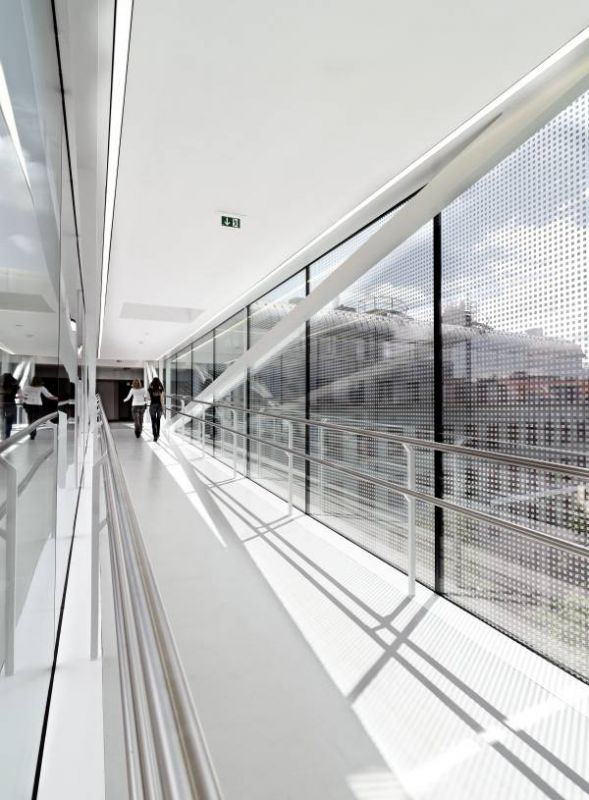 Statical System of the Bridge
The main supporting structure of the bridge is formed by means of two supporter trusses spanned beyond.
The top chords of these trusses – welded hollow profiles with a lower flange projecting on one side – are integrated in the roof plane. The trussed beams consist of welded rectangular hollow steel tubes.

There are integrated welded I-beams as supports in the walking plane. These I-beams are suspended by means of tension rods from the main supporters, and they are attached to the supporter trusses of the main supporters in the bend of the bridge.
Roof and floor level are formed as horizontal latticed framework and transmit the horizontal load into the already existing building structures. 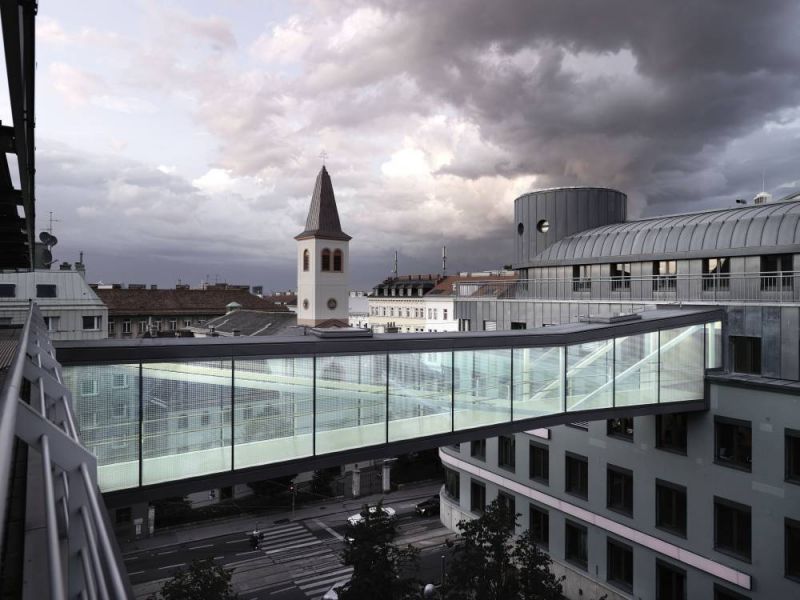 Geometry of the Bridge
From the buildings Rennweg 44 and Rennweg 46, there is extended a horizontal plane into the road space: 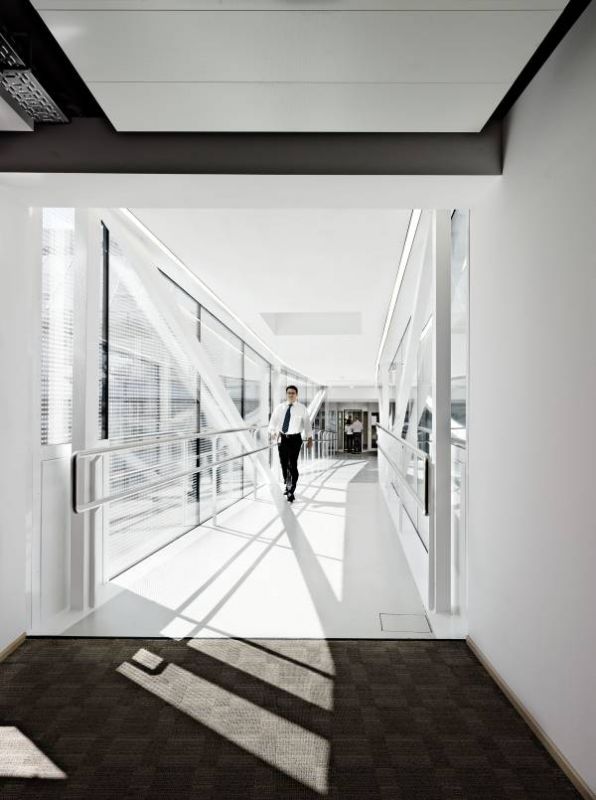 In ground view, the bridge is tapering from 2.70m down to a width of 2.35m at the middle of the bridge. In combination with the bends in the roof and the bottom plate there is created a bridge structure, which extends across the road space in a rather elegant way; furthermore, its interior area is clearly dominated by the perspective dynamics of the strongly aligned lines.

Illumination
The bridge is illuminated by means of two parallel light panels extending alongside the glass walls. These two light bands imitate the bends in the roof and the sidewalls.