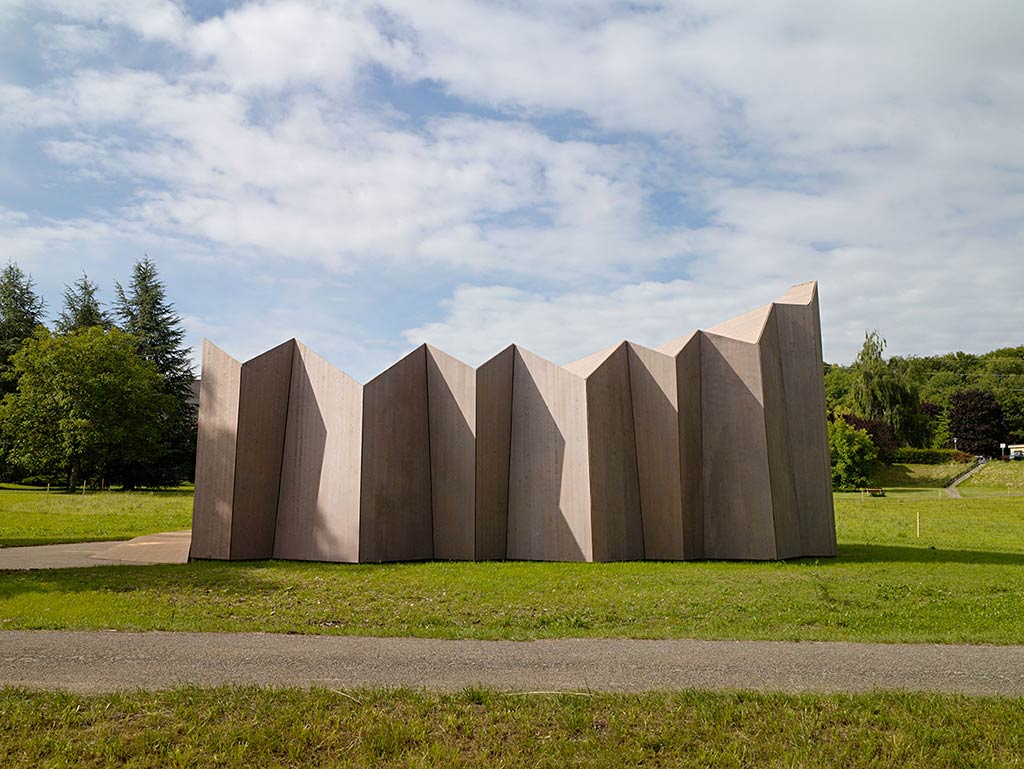 In the spring of 2007, the architects team of LOCALARCHITECTURE and Bureau d’Architecture Danilo Mondada won a design competition for the complete renovation of the «Maison-Mère» of the community of Deaconesses of St-Loup. The building work was expected to last for 18 months, starting from summer 2008 to the end of 2009. This induced that the nuns would need a temporary structure for their community’s religious activities during that period.

Collaboration
How to conceal the claim for a pragmatic and reasonably priced solution to be designed and built in very short time, with the exceptional spatial and symbolic quality required for a place of worship?
Particularly interested and experienced in prefabricated timber construction, the architects of LOCALARCHITECTURE took on to respond these very restrictive requirements and proposed a collaboration with the laboratory for timber construction IBOIS of EPFL. One of their research topics, folded plate structures for timber panels, seemed particularly adapted to the specific situation. The team developped then a structural design destined to shelter the temporary chapel. 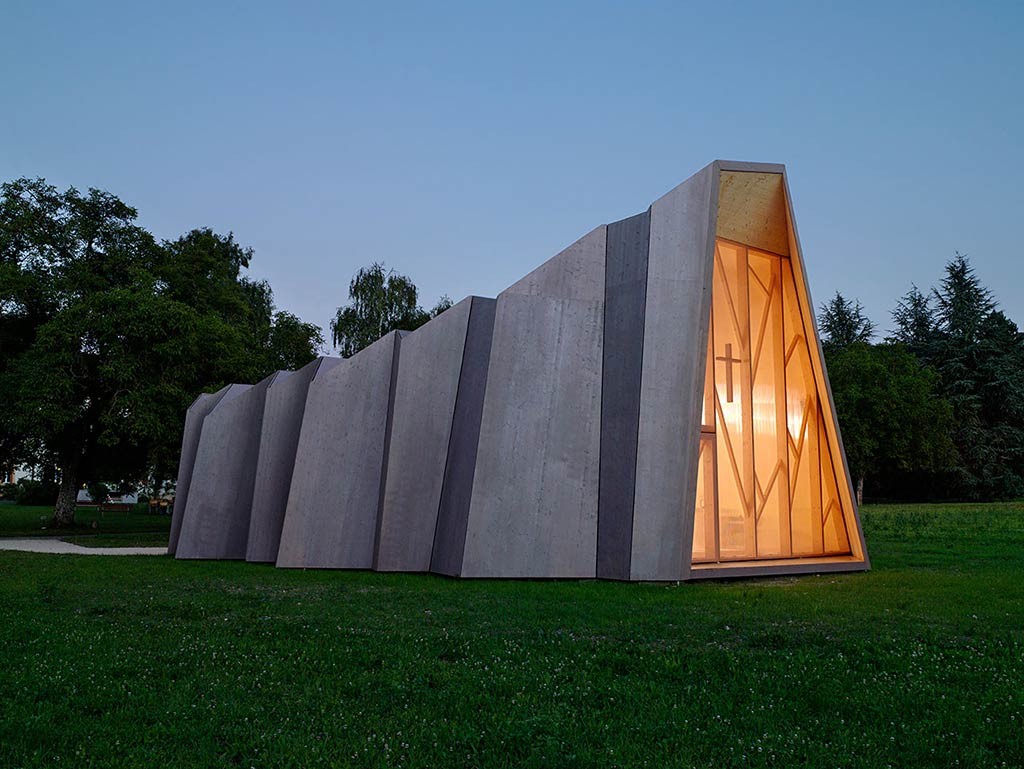 Situation
The outlying disposition of the different buildings forming the St-Loup plateau leaves space to a huge field in the centre of the valley. Due to its role and its limited duration in time, the new worship place occupies this central space, becoming this way a reuniting element for the whole of the site. At the intersection of the various site roads, an old walnut tree indicates the entrance to the little square in front of the church.

Tradition
After an analysis of the traditional Protestant churches, the project adresses the spacial variations of a church nave, from the transept to the chancel. A transition from an horizontal to a vertical space, passing through a succession of folds that give a structural rhythm to the interior volume. 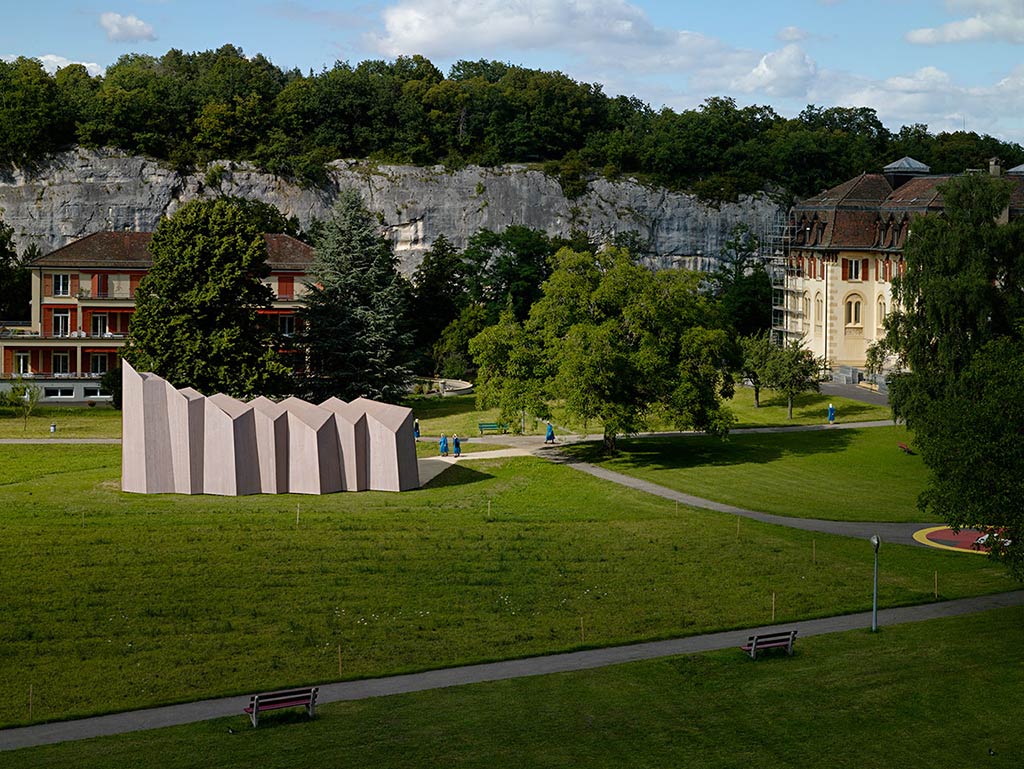 Geometry and form
The geometry of the chapel integrates spatial, structural, constructive, acoustic and lighting constraints in a single, synthetic form. Based on Origami, the japanese art of paper folding, the principle idea is to bent straight creases by reflection about a plane. Two lines define the folded plate geometry: a corrugation profile characterizes amplitude, interval, modulation and extension of the straight creases (blue) and the cross section profile defines how the straight creases are bent (red). 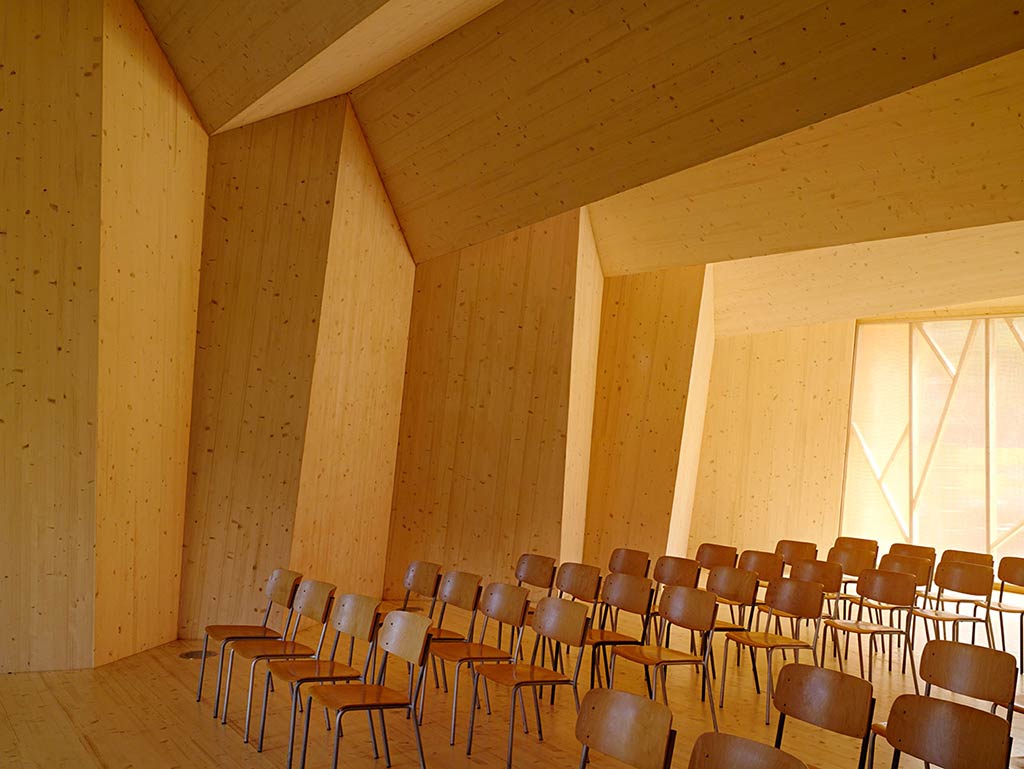 The following parameters determined the form of the chapel:
-The form should express a certain simplicity and evidence, be economic and had to be rapidly assembled: Therefore a very basic, trapezoidal cross section profile with three segments was chosen.

-In order to remind the vertical variations of a church space, the extension of the corrugation profile is slightly bent. This compresses the folded surface and the nave space raises up in direction of the chancel. On the exterior the first crease defines a entry porch and the rising tip on the other end remembers a small belfry. 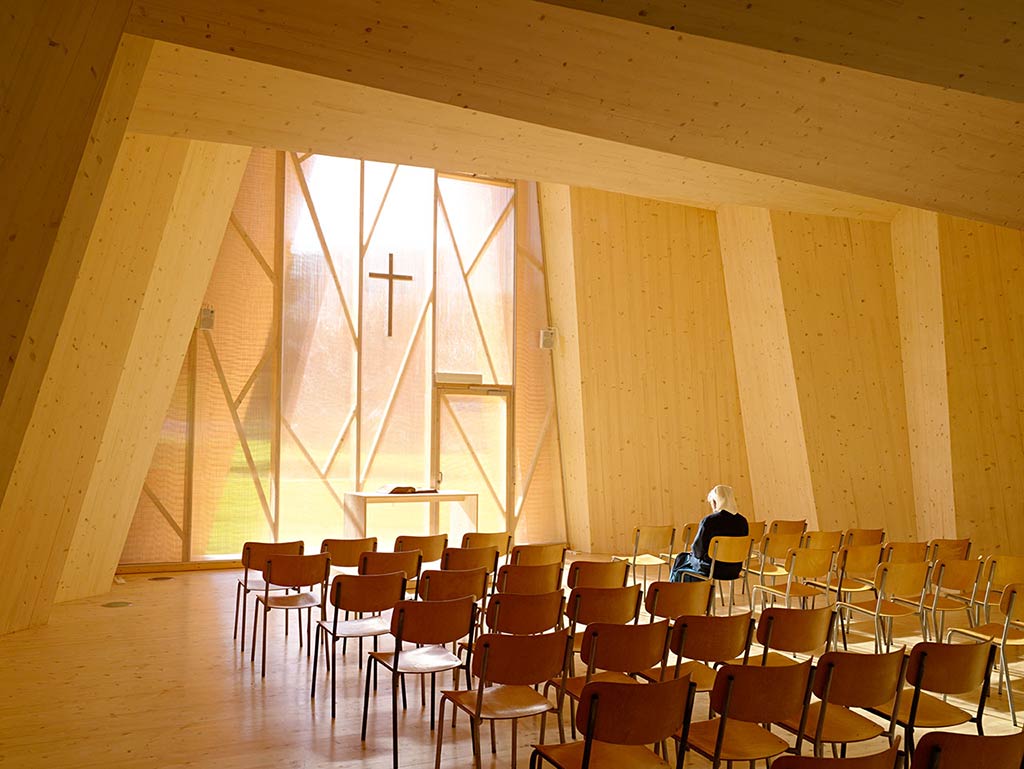 -By a modulation of the corrugation profile, the parallel folds became alternating concave and convex: Wall and roof get modulated by deep and small folds and the roof creases get transversally inclined. The sloped roof creases allow the rain water to be evacuated. The irregular inclination of the surfaces improves the acoustic and the lighting of the chapel.

Folded plate structure
The calculations with a finite element program showed that the folded plate structure could be built with cross laminated timber plates of 40 mm thickness for the walls and 60mm for the roof.
Plates are assembled with folded steel plates along the creases and simply cap screwed.

Construction
The simplicity of the detailing, a high degree of prefabrication and a direct data transmission from architects to engineers and to producers enabled the chapel to be realized in a very short time. The plates were fabricated and milled in the factory. They were assembled on place with folded steel plates and screws within ten days.
The structural timber plates are covered by a sealing bitumen layer. The exterior skin is made of 19mm surface coated plywood panels, assembled with open joints to secure rain water drainage.

Lighting east/west orientation
Disposed on the valley axis, the construction, opened on both sides, allows penetration of natural light. Each fold in the facade reflects the light differently and thus emphasizes the progression and elongation of the volume. 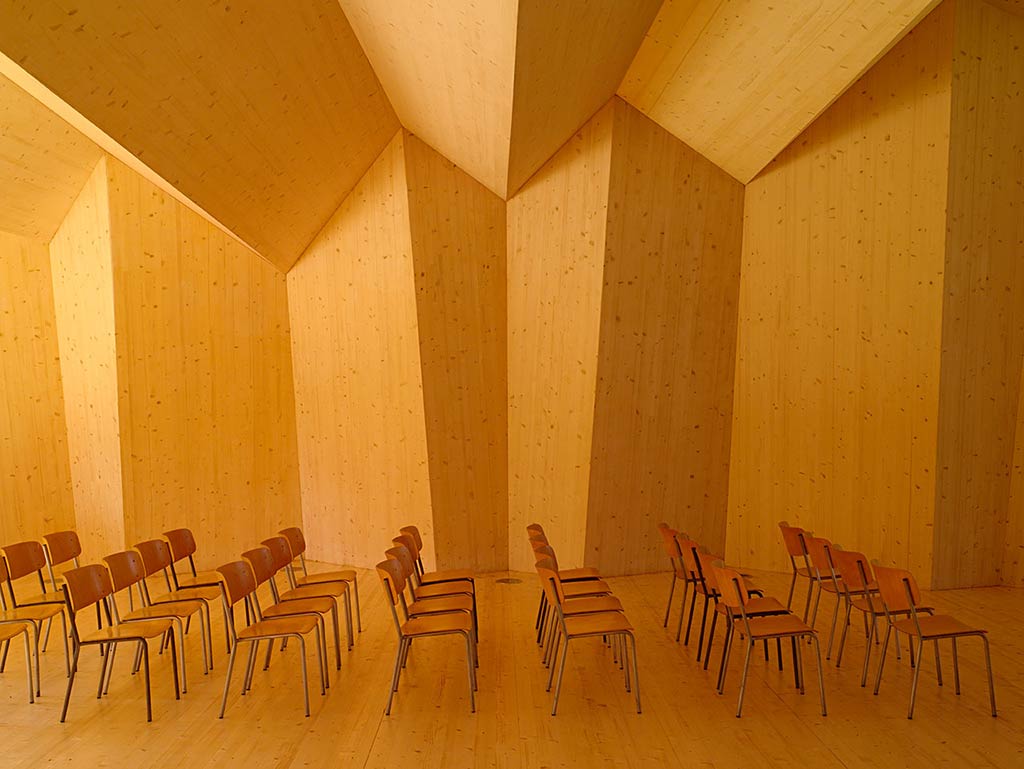 Natural light
Natural light is essential to confer on space a calm atmosphere, contributing to spiritual introversion, as well as to reinforce its symbolic value.
The chosen type of structure allows both end facades to treat natural light.
In order to precisely control quality and quantity of light, as well as to offer some spatial privacy while being open to natural context, the architects designed a «double skin» facade.
It is composed of a textile on the outside and corrugated polycarbonate panels on the inside. Both layers are supported by a framework of upright and diagonal pine wood sections which remind the structure of traditional stained glass windows.

Quality of light
An abundant light invades the chapel. It is then reflected off oblique surfaces and designs a slightly irregular succession of shadows on the timber plates. The outside textile mesh lets light infiltrate the space while protecting the interior from direct sunlight and the effect of blindness. The ondulating geometry as well as the soft and clear texture of timber panels wood conducts the light to the chapel’s center.

Intimacy and openness
Just like stained glass windows, natural light is filtered through a figure – abstract, figurative or symbolic- and the outside context vanishes to provide the sacred space with indispensable privacy. Here the perception of the environment is diffracted through the transluscent polycarbonate panels and is thus reduced to its essence. A visual abstraction that strengthens the inwardness of the religious space.

Night time
At night time the interior space reveals itself to the outside and the building turns into a lantern for the entire site.