5 Artists That Are Pushing The Boundaries Of Architecture With Tech

To most people, technology is a welcome generator of opportunity, expanding the possibilities of everyday life — but not everyone feels that way. Some view it more dispassionately, even considering it an annoyance and a reminder of everything it displaced in its growth.

What the architecture industry has always understood, however, is that technological progress needn’t be cold and pragmatic in its design: indeed, it can be quite beautiful. Inspired by countless sources both ancient and modern, designers can draw from disparate practical and aesthetic elements to create unique blends that show just what tech can achieve.

Last month’s CODAsummit brought together a variety of artists and designers with impressive track records of using technology to push the boundaries of architecture and art, providing fascinating glimpses of the future while casting light upon the past.

Let’s take a look at five of them, examine their projects, consider how they’re using tech to push the boundaries of architecture and art, and investigate what inspired their bold creations:

Light effects are wonderfully flexible and are particularly impactful when used to alter the perception of an environment — something that Titia Ex is extraordinarily talented at. The project she created for the city of Emmen in the Netherlands, entitled “Dolmen Light” (pictured in the featured image), covered the interior of a tunnel with a light display in the shape of dolmens, those being megalithic tombs common to the area in prehistoric times. 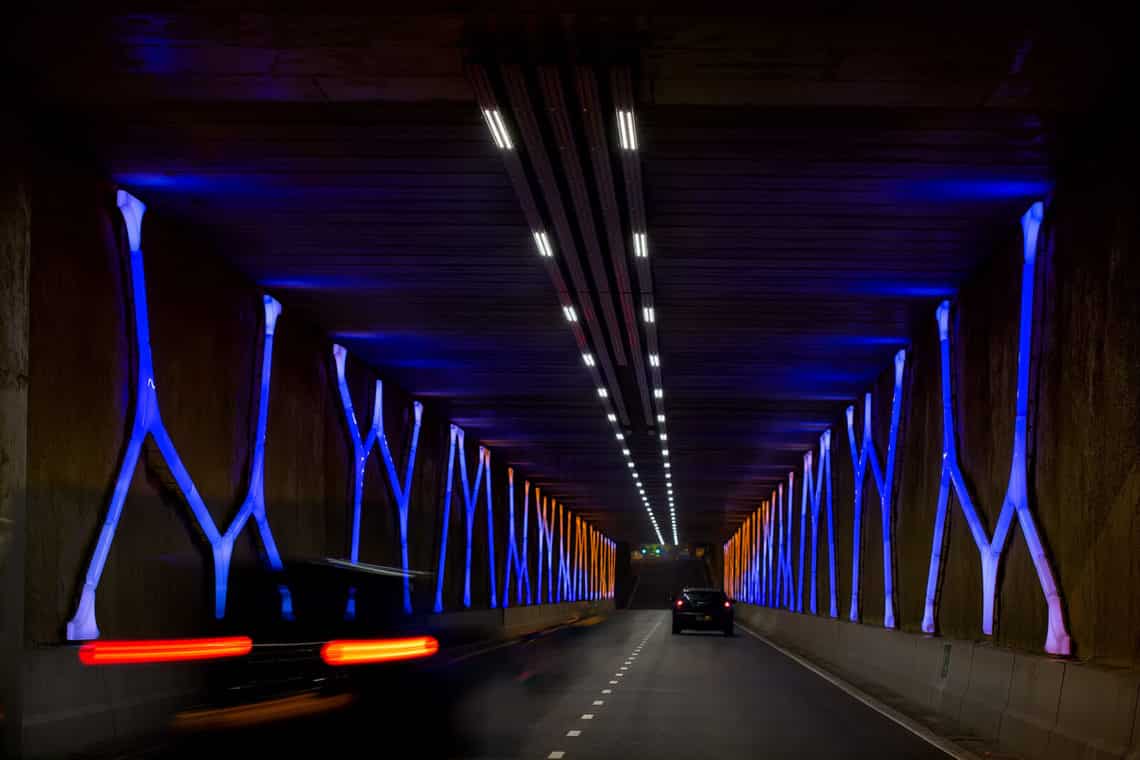 In addition, the colors of the display weren’t just set to evenly fluctuate: they were configured to adapt their rate of fluctuation based on how quickly cars passed through the tunnel, ensuring that everyone who went through the tunnel had a chance to see the full spectrum.

The overall effect was twofold — not only harkening back to ancient architecture in a modern structure, but also representing large physical structures using flat light effects.

Dolmen Light by Titia Ex from CODAworx on Vimeo.

Working from the Titia Ex Light Art Studio, her most recent project (entitled “Juicy Lights”) is suspended above the Ten Kate market in Amsterdam. In daylight, the display (an array of bunches of metallic grapes) reflects its surroundings, playing upon both the real grapes on sale in the market and life’s natural resources as detailed in poetry by J.J.L Ten Kate (whose name was taken for the market). 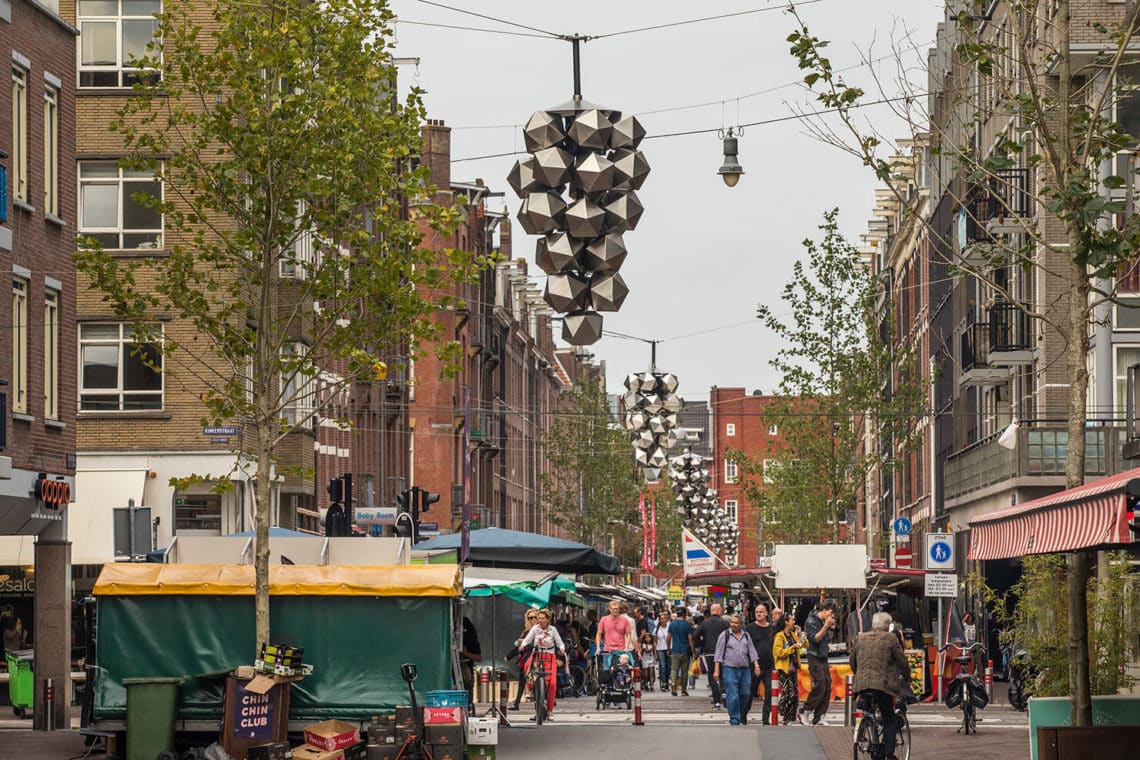 When the sun goes down, though, the structures light up, as if to shine with the light they absorbed during the day (just as grapes grow ripe in the sun). Their subtle glow pulsates in the night air, and they cast light shapes down to the ground as if dripping juice.

In this case, we see the representation of organic themes with inorganic technology. Physical installations can be made dynamic and creatively flexible in this way: the parameters can be changed remotely, expanding the long-term utility for supplementing existing architecture.

Juicy Lights from StudioEx on Vimeo.

The divide between the online and offline worlds can be difficult to fathom at times, with people left to wonder what the real-world significance of digital activity is. After all, it is both permanent (in the sense that it can so easily be backed up) and impermanent (in the sense that it occupies no significant space and can be erased in an instant). Matthew Mohr, an Associate Professor at the Columbus College of Art & Design, created a permanent installation at the the Greater Columbus Convention Center to recontextualize the digital world. 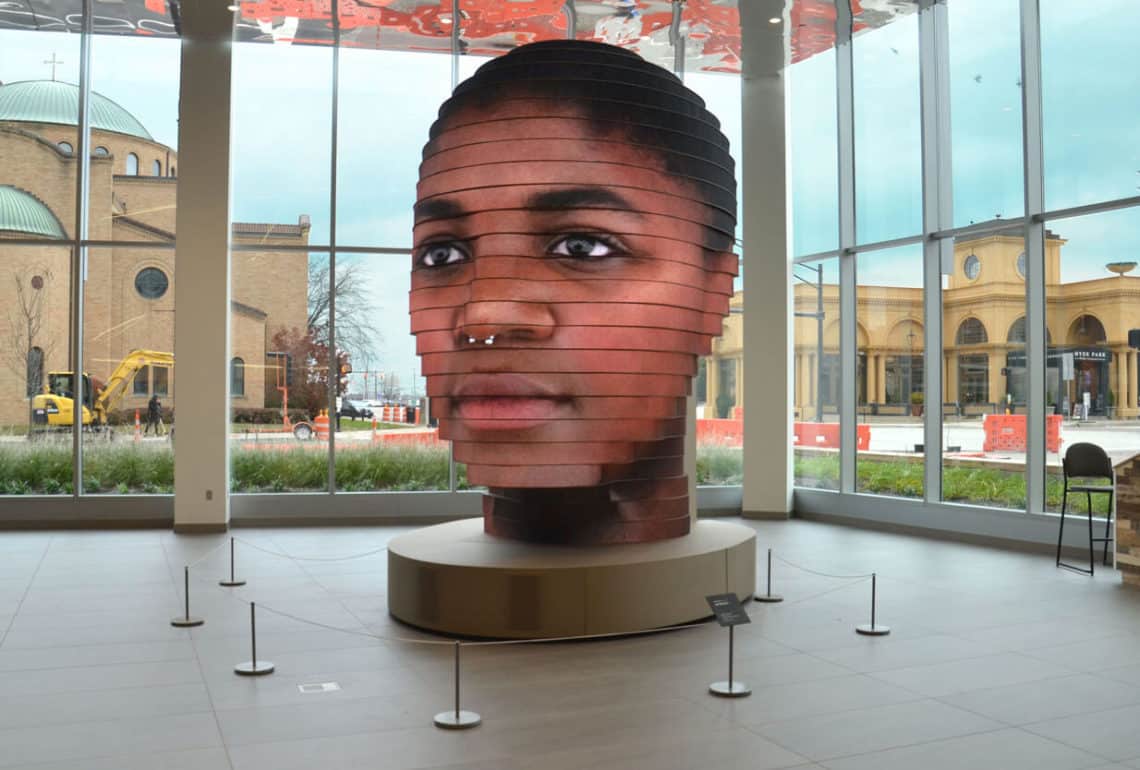 Entitled “As We Are,” his structure consists of a 14-foot 3D head wrapped in 23 stacks of blazing LED ribbon displays, with the neck containing a 29-camera 3D photo booth. Each visitor can enter the booth to have their 3D portrait scanned, after which, said portrait will be displayed on the exterior of the head. Visitors are thus driven to think about what their online personas and activities actually mean to the wider world.

“As We Are” by Matthew Mohr from CODAworx on Vimeo.

This kind of enhanced architecture is likely to become increasingly more common, with utilitarian interiors and customizable exteriors — be they graphical overlays (as in this instance), or mechanically adjustable systems — allowing a convenient blend of practicality and style.

Heading up BREAKFAST, a team of multidisciplinary artists and engineers, Andrew Zolty works to create unique structures that blend new technology with old themes. At CODAsummit, he spoke about their 2015 project for Forever 21, entitled “Thread Screen,” which consisted of  6,400 mechanical spools of thread assembled in a display reaching over 13 feet tall. 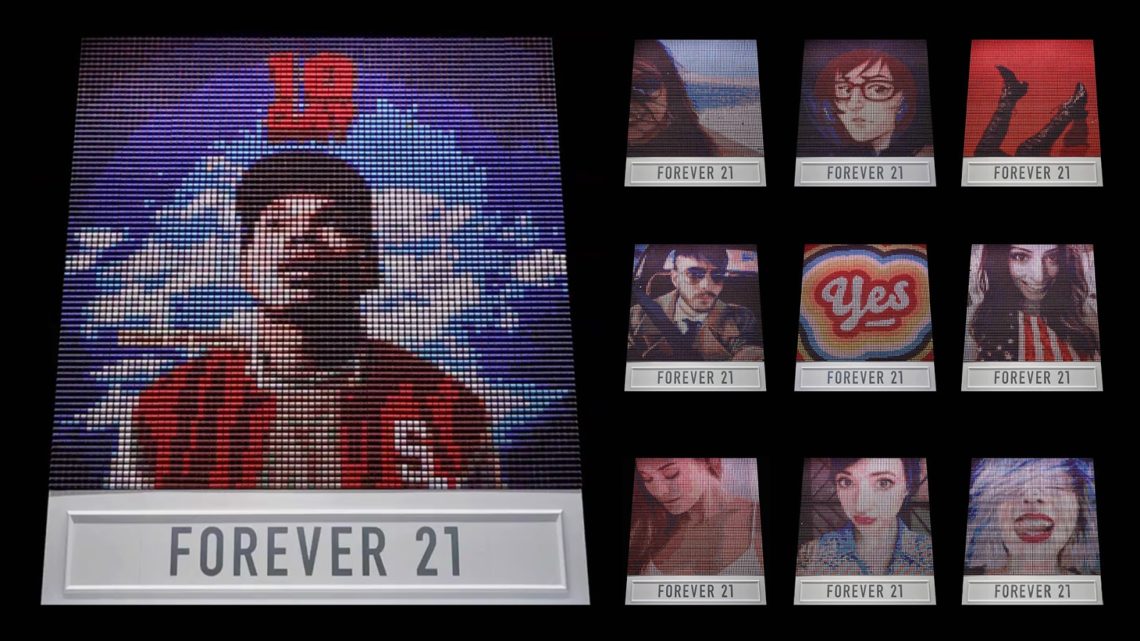 What was special about the installation was that each segment could cycle through 36 distinct colors to form a giant image. While similar in principle to Mohr’s “As We Are” project, the implementation was rather different: anyone who wished to participate was encouraged to share an image on Instagram using the hashtag #f21threadscreen, and the best ones were selected to be shown for a brief time on the thread display. 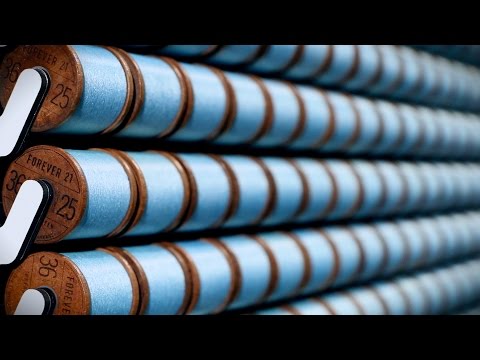 This not only allowed people to get entirely different levels of exposure for their social media activity, but also combined the principles of digital displays (individual pixels given color to form larger images) with an old method of picture creation (stitching using thread.)

Another of BREAKFAST’s projects of architectural interest is its 2013 product entitled “Points.” The problem was simple: more and more cities across the globe are turning to large digital displays (often touch-sensitive and interactive) to provide information for tourists and citizens alike, but they’re often ill-fitting solutions. Not only do they get rapidly damaged by use, but they can also easily become closer to outright advertising platforms than public support tools.

To address that problem, BREAKFAST conceived of Points: sets of simple and clear digital displays in the shape of classic signposts, with each sign capable of rotating around its post to cater to different locations. Using Points, instead of people needing to crowd around screens to get the latest updates, they can get at-a-glance information about time-relevant events and locations — they can even change the selected category (as seen above) to retrieve data. 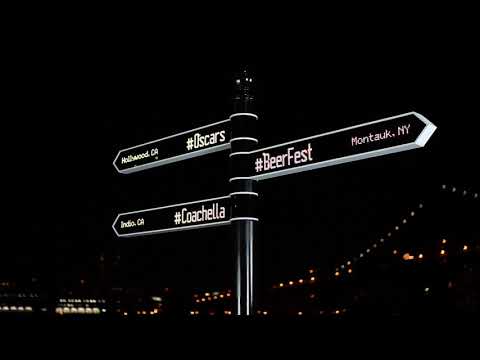 Imagine such a system implemented on a college campus, changing its positioning after each period to provide up-to-date class information and directions, or in a hospital with specificly named appointments to help people along. With plenty of people (particularly of older generations) still not being overly familiar with technological interfaces, it could give them the benefit of digital data in an accessible way.

Something increasingly important in the architecture world is long-term environmental viability. With climate change looming threateningly, we must be extremely conscious of how structures will be powered, and how they can be adapted to help promote green energy. This is something that Andrea Polli is clearly very passionate about, as her artwork typically brings in scientific data gleaned from collaborations with scientists and engineers. 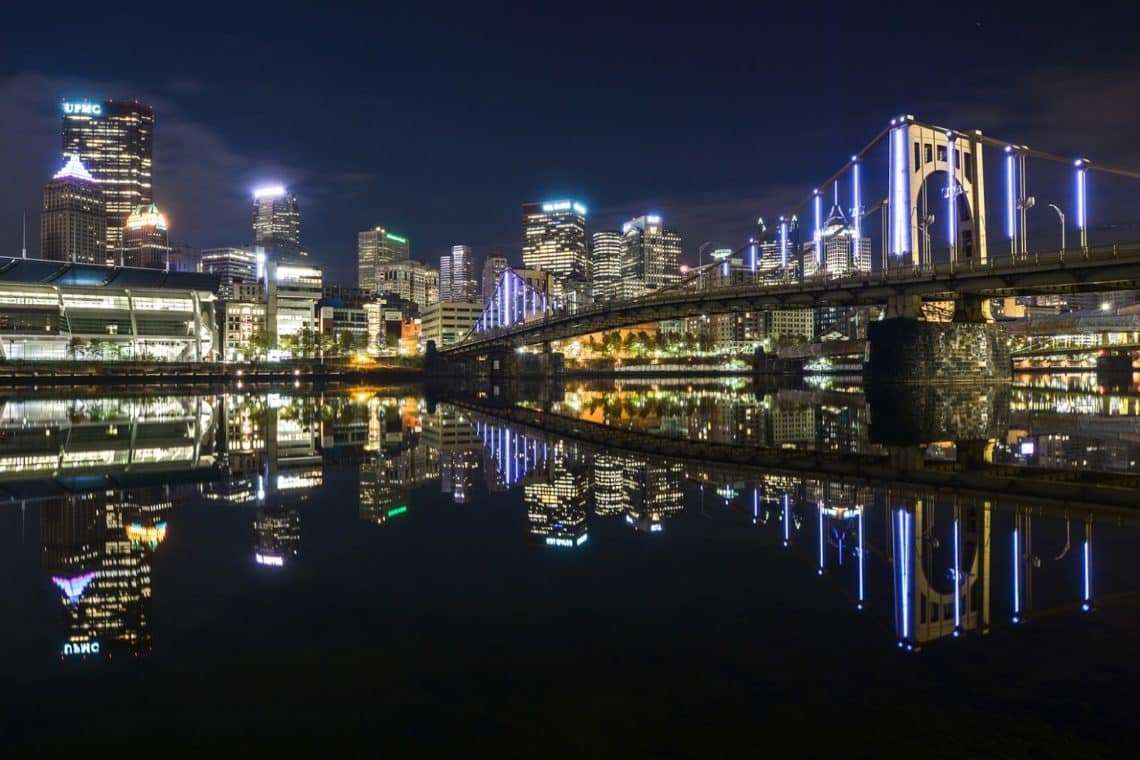 Installed on the Rachel Carson Bridge in Pittsburgh from November 2016 through April 2022, her project entitled “Energy Flow” consisted of more than 27,000 multicolored LEDs attached to the vertical bridge cables, with each one individually programmable. Not only were the lights powered by sixteen wind turbines attached to the bridge’s arches, but they also changed color and intensity to display wind speed and temperature change information sent from a weather station elsewhere on the bridge.

The Rachel Carson bridge was chosen for this project because Rachel Carson was a marine biologist and conservationist who championed environmental causes. Because the area was considered promising for wind turbines (which are great for energy efficiency,) the installation was thus very useful for getting the concept more attention and enthusiasm.

In future, this kind of informational display could be extraordinarily effective at achieving transparency regarding how much energy structures are using, and how they are sourcing that energy. Could we see a time of all new builds having inset energy displays to quickly identify those failing to achieve environmental standards? Backed by communal hubs such as CODAworx, it certainly seems possible.

We’ve seen environmental and thought-provoking data displayed architecturally through technology, but what about comfort, and practicality through a layer of abstraction? Jason Kelly Johnson is the co-founder of Future Cities Lab, a design practice that seeks to use artistic designs to practical effect in public spaces.

His project “Murmur Wall” is currently on display in Milan, Italy, consisting of an abstract structure driven by an AI system that harvests regional search engine and social media activity and displays that rich data stream through animations of its LEDs and text on its digital displays. People may also volunteer contributions through the Murmur Wall website — each viable submission will appear on the display just once, never to be stored or reused. 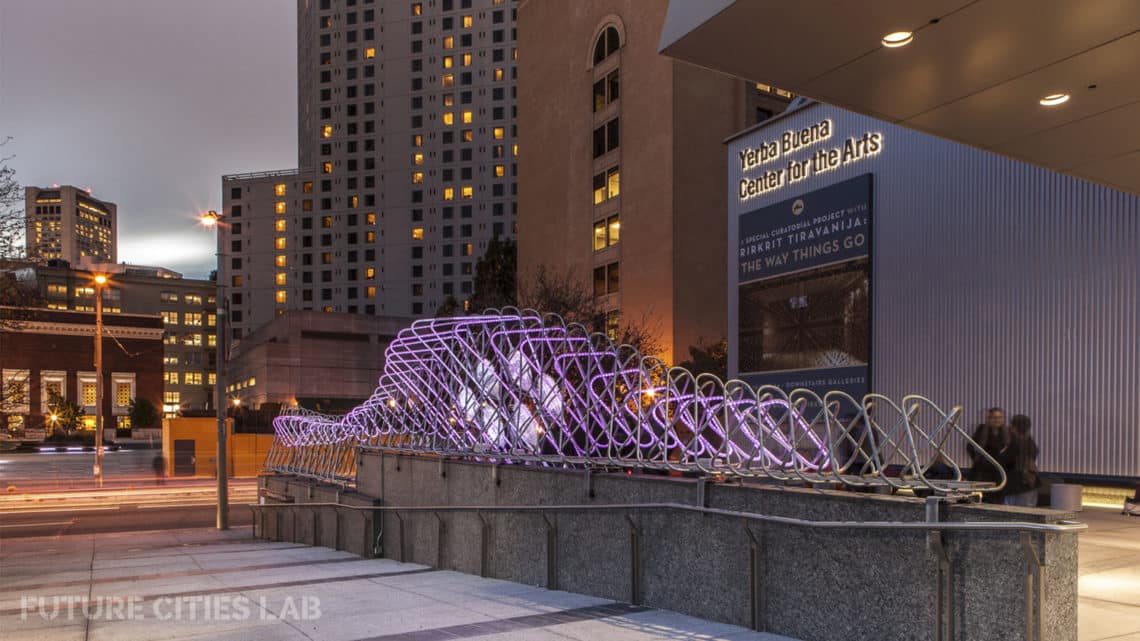 The idea is to provide semi-abstract insight into what’s happening in the city at any given time and what might be about to happen. How are people feeling? What topics are on their minds? What events are driving them into online frenzies? Visitors to the Murmur Wall may reflect on what it all means to them: whether it brings them reassurance or discomfort.

Another of his Future Cities Lab projects is “Data Lantern,” first shown at the 2015 Market Street Prototyping Festival in San Francisco.

Where the “Points” project from BREAKFAST was direct with its data representation, the Data Lanterns serve more as simple beacons attached to existing structures such as light posts and signaling poles — drawing data from transportation systems and lighting up to indicate the arrival and departure of trains, buses, and ferries. 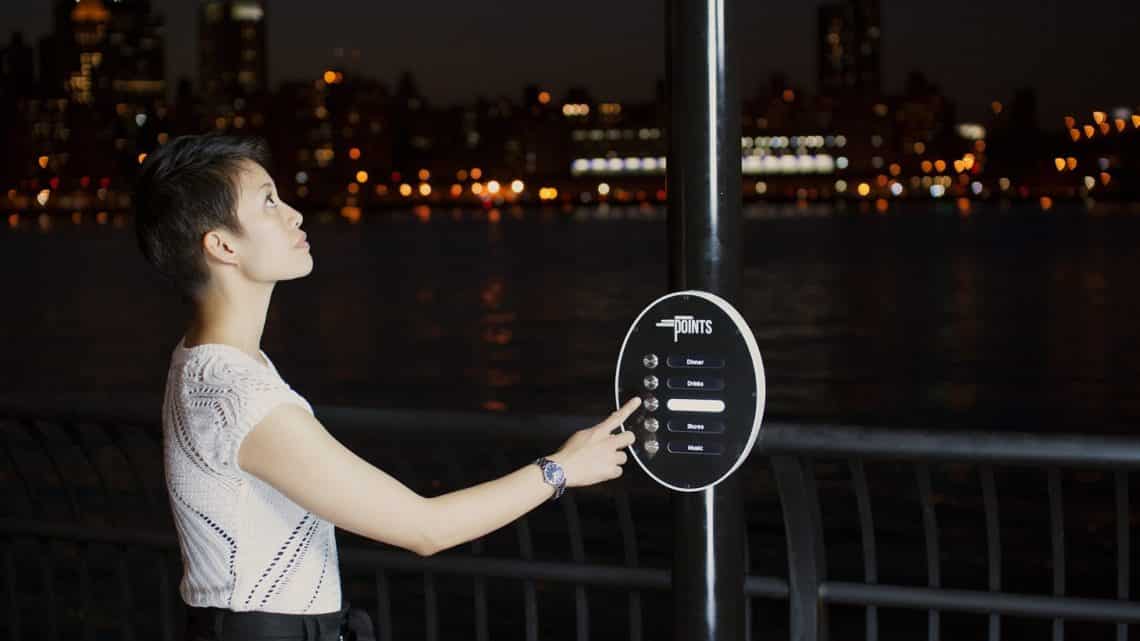 Technology can do so much to change the way we approach artificial environments. It can harken back to our history, as Titia Ex and Andrew Zolty show. It can link the abstract to the concrete, as Matthew Mohr and Jason Kelly Johnson show. And it can turn them into tools for social progress, as Andrea Polli shows. Further bolstered by digital information, automation, and design, the future for architecture is going to be extremely interesting to follow.

CODAworx is on a mission to transform every space in the world by making great commissions happen. Its network connects artists and creative teams to architects, design and art professionals, and the universe of companies that provide services and products for commission projects.