The Evolution of the Staircase and Its Urgent Accessibility Revolution

I recently learned that people actually buy staircases online and have them shipped to their house. While attempting to wrap my head around this fact, I began reflecting on the evolution of staircases throughout history.

Could you imagine a building without staircases? Or perhaps a situation where the elevators are broken down and the only option to avail higher floors of the building is the same. How do you suppose you would go up? Even though tedious to climb, stairs are an integral part of buildings and high rises.

Does it ever cross your mind as to who invented staircases and when? Such an important invention, but hardly anyone has knowledge about this architectural wonder!

It is hard to throw light as to who discovered the idea of stairs, but there have been patented ideas by various men in history who have designed exceptional staircases. – The evolution of ideas shows us changing times in history, beliefs, philosophy and needs. They stay in history forever and tell us a lot about culture, civilization, modernization and so on.

Everything has evolved over time, from politics to human beings, fashion to technology- so why not staircases? Recent generation and designers believe in innovation, and incorporating these ideas with the old grand designs brings about masterpieces. Believe it or not, people do splurge millions into designing the best suited staircases for their houses!

In the old days, stairs used to be constructed with logs as well as flattened stones and similar structures. These were again typically for access to higher areas or caves, etc. Even though time has brought about various changes in designs of staircases, the basic structure and shapes remain the same. 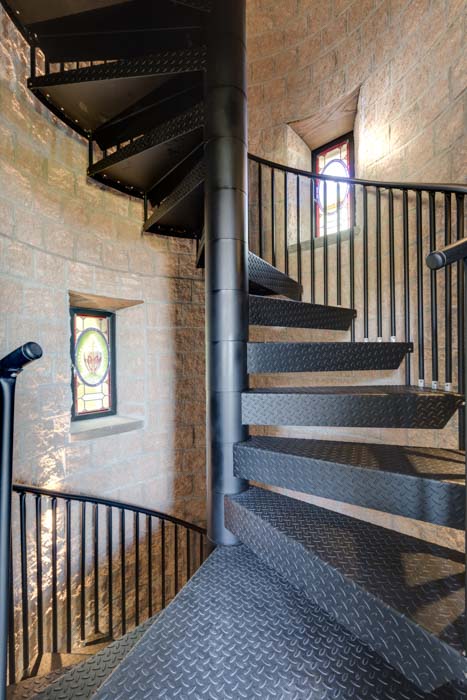 Where it all started

The evolution of staircases could be traced down to around 6000 BC. Ancient designs of stairs served a few purpose and one of them was moving to higher or lower levels, or even terrains. Under such circumstances, staircases also meant moving to safety and avoiding situations in which it was crucial to move to higher levels. With time, the focus shifted towards more philosophical and religious views.

Stairs were thought to be directed upwards and hence towards the divine Lord. It was said to be pointing towards heaven and had cultural values associated with it. This especially was seen in China, where around 55 BC, Confucius was said to climb up his ladder and establish a connection with earth and sky to reach a divine height!

There were also the staircases of the pyramids of Egypt. All of these designs suggested one thing, even though they were in different parts of the world, moving towards the divine and sacred, reaching specific heights. There were other references to ladders and staircases with religious beliefs, which strongly suggest human nature and their thought processes to evolve further developments for designs of stairs.

Geological dangers and differences were obviously the first reason for the construction of stairs. With the need of climbing hills and valleys, came further designs of stairs, mostly built out of natural products like wood or even hand carved from stones.

With the advent of time and civilization and the rise of wars and battles, came a further step towards the evolution of the staircase. Castles and forts in Kingdoms required different designs of stairs, often winding and were used by soldiers and King’s Men. It was crucial since it was a matter of time and safety during wars.

Military reasons led to newer designs which favored battles and victory. A quick way to escape danger, stairways became a vital part of architecture. Most of these models were spiral and had to be strategically planned so that soldiers and militants could stand in specific locations to defend and guard themselves.

The luxury behind staircases

As royalty unfolded, the designs of staircases also evolved. Modernization and Art and Fashion had a huge impact on architecture and extremely talented craftsmen designed staircases fit for Kings and Queens. With the era of Jacobean styles in the 1400’s to the Victorian styles, the structure was intricate and genuinely evolving. 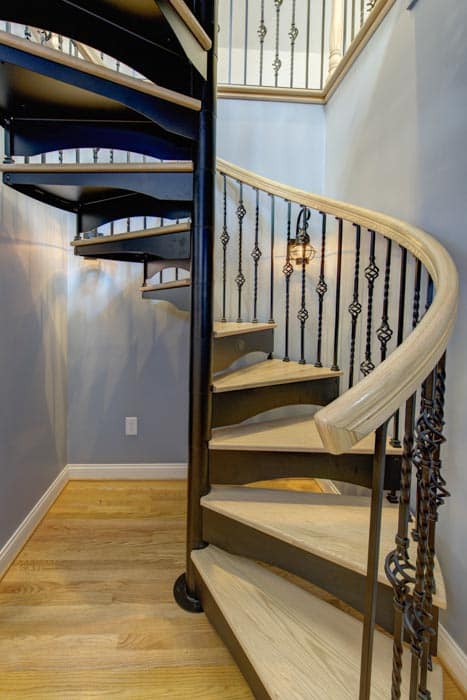 Early staircases used to occupy a considerable section of the construction of the building, but with time, the aesthetic value has decreased due to lack of space.

With time the designs of the balusters also changed. Late to early Georgian era shows a wide variety of designs of staircases and how balusters were placed and designed. A building would constitute of various flights of stairs leading to upper levels, serving various purposes.

Modern-day stairs showed a stark difference from older designs. There was lesser utilization of space, lesser complicated designs and simple and effective ways which served the primary purpose of building it. Elevators and its discovery have changed how stairs would be looked upon, but a building always has stairs as per the protocol for emergency purpose.

Peak into present and the future

Newer designs focus on mobile stairs, that is, escalators. These machines and electrically run stairs change how we look at stairs, making lives much more natural. Stairs still depict how there is a clear difference between the well-off and the economically backward. 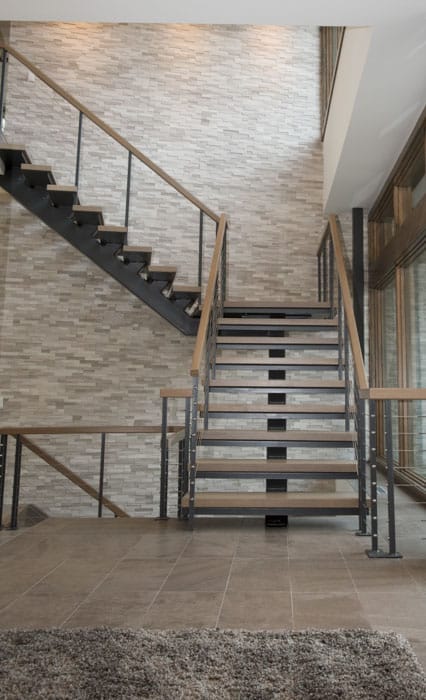 Huge bungalows and houses boast extravagant and grand stairs that occupy a vast section of the house. Some people like to add a royal touch and often find olden designs in modern architecture to add a bit of vintage effect.

Mathematical designs and its effects on the architecture of stairs showed significantly from the nineteenth century onwards. Modern day designs showcase stairs made out of glass and is no longer dependent on conventional plywood or metal.

With more futuristic designs, there was a path which was paved towards building skyscrapers and high rises, and this is what governs modern day architecture. Now, one could have staircases which show an aquarium underneath or even the view below, from the top of a high rise building!

The necessity behind it

Stairs are necessary, and there is no question in that. Until the nineteenth century, elevators did not exist, and the only form of transportation to higher levels used to be aided by stairs. How they were built depended mainly on the era, and the culture.

The grandeur of the designs was beautiful and genuinely depicted the culture and art of the period it was built in. It also made a clear-cut differentiation between the affluent and the lower class.

Even though stairs and its designs have changed a lot, now more than aesthetic reasons, creativity of designers and architects showcase more for safety and for the disabled and how one and all could use stairs.

Increase in age brings various problems in one’s life, and a significant one is walking and climbing heights. Not just for the aged, various challenged and disabled individuals across the nation find it challenging to use stairs and hence the invention of stair-lifts. Stair-lifts make excellent substitutes for elevators and for home spaces, where there is a constraint of both space and budget. Even though they could be pricey, there is always a back-up.

The need of the hour is focused on stair-lifts as it may be difficult to accommodate all kinds of needs in the lower floor of a building. Assessment of space is necessary before deciding on installing stair-lifts, and that is where the experts come in.

Second-hand stair-lifts, as well as social service workers like Occupational therapists, could be asked for or hired to assess the need. It is essential to get professional help as any disturbance in the mechanism could be dangerous for the individual. They are battery or electrically operated or have call-stations.

Stair-lifts are definitely one significant discovery in the revolution of staircases, but apart from that, newer and more modern ideas are also adapted for the disabled. Long length handrails provide an excellent support for individuals who find it difficult to climb up or downstairs. There are also mobile rails which help in this.

Newel rails are other types of rails which could be installed for easier accessibility of stairways. They can move 90 degrees around the post, thus making movement easier.

What Stair-lifts are all about

Due to various demands and specifications, various manufacturers have come up with different types of stair-lifts. They could be the most simple and basic seated type with an arm and footrest. The seat heights are usually adjustable. They could be swiveled around too.

For houses without a wide space for conventional stair-lifts, the standing and perching stair-lifts are an excellent option to consider. There are also designs which accommodate the need of using a wheelchair while utilizing a stair-lift.

Elevators and its uses

Of course, lifts are perhaps the most common mode of in-house transportation; however, they could require a lot of space and investment. If possible to install one, there are different designs of the same. Through floor lifts with modifications according to the choice of the buyer are manufactured. For example, lifts with a ramp and handrails.

Mobile stair climbers are another type of device which is commonly used for individuals who find it difficult to climb stairs, and these help wheelchairs to effortlessly glide through a ramp when placed on the stairs. These could easily be used in winding stairs too.

And the evolution continues

It is safe to say that staircases are thus a very vital part of buildings and will be so even in the distant future. Accessibility for all should be the prime focus while designing stairs and with globalization and newer invention, this will only progress with time.

© All Photo Courtesy of Paragon Stairs