The Flatiron Building, completed in 1902, at a height of twenty floors, had the title of one of the tallest buildings of New York and the second ever skyscraper north of the 14th Street. Designed by architect Daniel Burnham, one of the most well known buildings in New York city, was a prime architectural design at the peak of steel skyscraper construction in the United States.  First called the Fuller Building, the inspiration for the building design came from architect George A. Fuller, who was known as “the father of the skyscraper.” Originally from Chicago, Fuller opened an office in New York City in 1895, four years after the city building code was altered  to allow for skeleton construction and curtain walls.

Here, Fuller built The New York Times Building in Times Square in 1898. Chicago architects Daniel Burnham and his designer Frederick P. Dinkelberg used a technique similar to that, developed by Fuller, for the Flatiron Building, and the building served as the offices of The Fuller Company until 1929. However, the name did not stick around, as locals called it The Flatiron and the nickname remained. 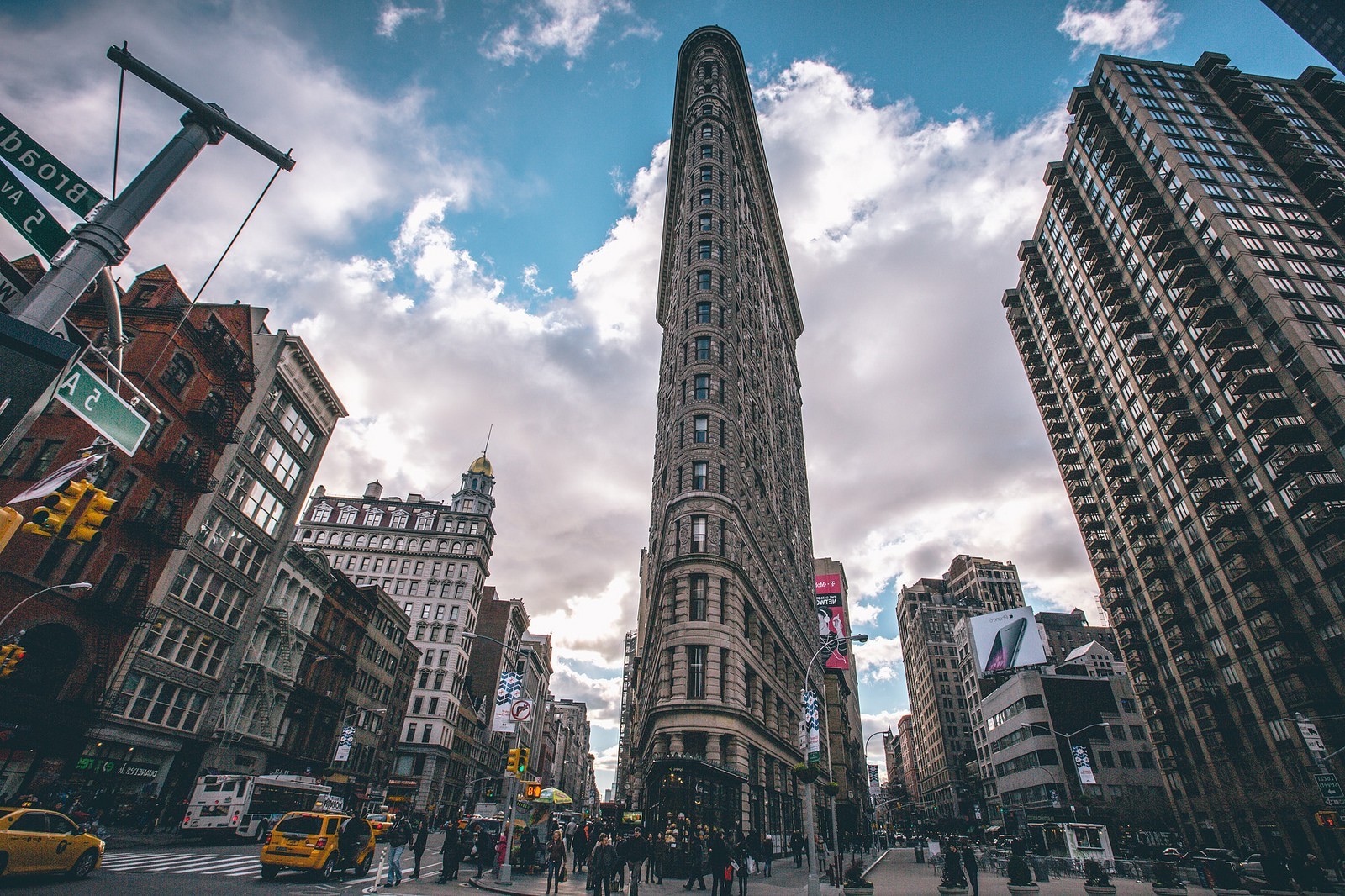 The building site, located at 175 Fifth Avenue in the borough of Manhattan, New York City, was first bought by Amos Eno in 1857 who developed the empty plot by firstly building the Fifth Avenue Hotel on it.

Shortly after a seven-story apartment building followed known as the Cumberland and after it four three-story commercial buildings were built on the remaining part of the parcel. This left the northern façade of the Cumberland bare and it was occupied by advertisers, such as The New York Times and The New York Tribune. Both Times and Tribune started using the empty wall for news bulletin which led to gatherings of large group of people counting up to more than 10,000 people in the Madison square for occasions such election nights. The open location became known as “Eno’s flatiron”

After Enos death the site went for liquidation and was bought from the city by William Eno, one of Enos sons, for  $690,000 – a value much greater than the $30,000 his father had bought it for forty years before that. Soon after he resold the property to Samuel and Mott Newhouse for $801,000 who had plans to put a twelve-story building on it but ended selling it after two years to Cumberland Realty Company, investors from the Fuller Company. The lot was bought with the idea of building the new main offices on it despite the decaying of the neighbouring district.
Black hired Chicago architect Daniel Burnham as a desginer of his first skyscraper in New York. 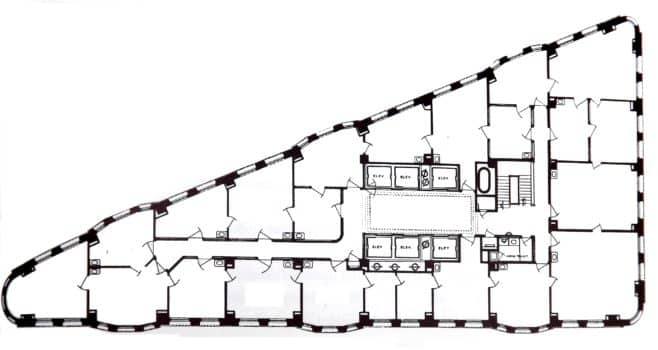 One of the most interesting aspects of the Flatiron Building is that its design emphasizes the triangular shape of the site, which is due to its acute angle at 5th and Broadway that creates the cornered condition with the northern side of the building only 6.5 feet wide resulting with an angular layout of the building interior. The Flatiron is a archetype of the Chicago school conception unlike previous New York skyscrapers which were known as slinkier structures rising from a lower, bulkier unite, such as the Singer Building (built 1902–08). The designer, Daniel Burnham, gave it a shape similar to a classical Greek column, its body is divided in to a base, shaft and capitol with limestone at the lower parts altering to glazed terra-cotta as the floors rise. 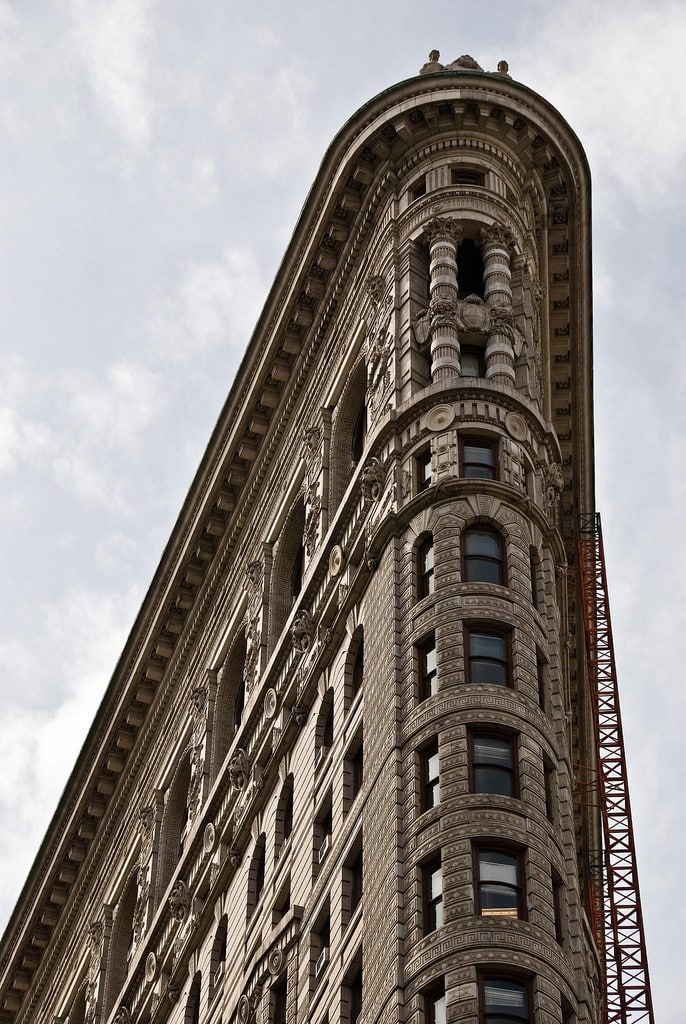 Once construction began it developed in a rapid tempo with the floors going up at one floor per a week rate, after the foundation was finished. And once the steel frame was complete, it only took four months to finish the building. However, during construction New Yorkers doubted its stableness as the steel cage construction was quite uncommon in New York when the Flatiron was built and doubted it could stand against the strong winds Manhattan faced. The leanness of the building also added to the public’s concern, and there was a fear that the building could shift down. Upon competition the building got a lot of criticism with the most know being called the “Burnham’s Folly”. The criticism was mostly based on the claim that the combination of the triangular base and height of the building would result in it collapsing. Most critics considered that at the intersection of the two streets a dangerous wind could appear and demolish the building. Despite their primary concerns, the buildings structure was designed to withstand four times more than the standard wind loads to maintain stability and hold the buildings recognizable triangular shape. 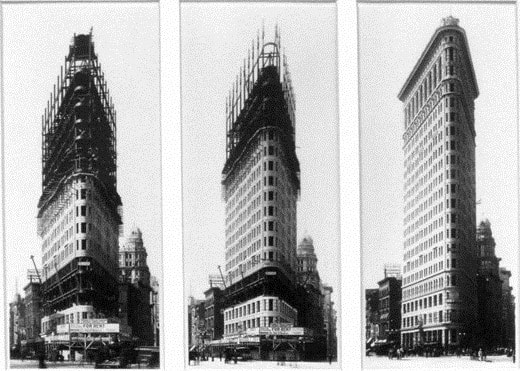 Source: Library of Congress – From The Times on-line store

The Beaux-Art building with an architectural style found Europe in that period received a harsh criticism upon competition but some saw it in a different way. Futurist H. G. Wells wrote in his 1906 book The Future in America: A Search After Realities

” I found myself agape, admiring a sky-scraper the prow of the Flat-iron Building, to be particular, ploughing up through the traffic of Broadway and Fifth Avenue in the afternoon light ”

The Flatiron was the main role of many artists work. There are on going installations in the glass Flatiron Prow Art Space, once known as the cowcatcher. In fact, the entire building used to be called the cowcatcher. Author of The New York Landmark and the Incomparable City That Arose with It, Alice Sparberg Alexiou, wrote that It may have came from the shape of the lot which recalled the metal piece attached to the front of locomotives to prevent derailment from livestock unwittingly cross the tracks. Although some said that cowcatcher referred to the fact that cows from once nearby farms often wandered into it to avoid the increasing traffic on the street. 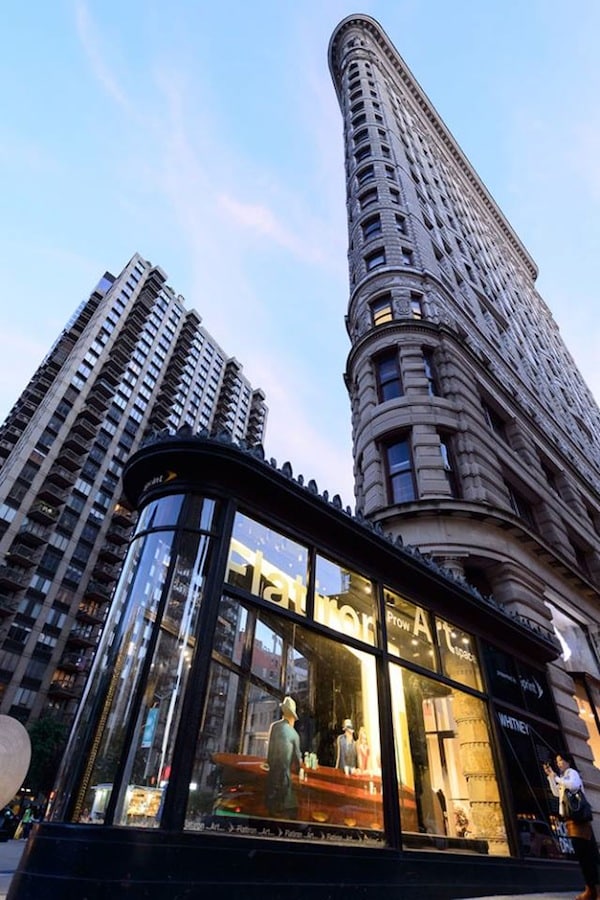 Since it was built, the Flatiron Building has been an famous architectural symbol and an global tourist spot so popular that even Seeing New York operated its open-air New York City bus tours from the building on an hourly basis.  The building is a popular location for tourist photographs and is possibly one of the most photographed buildings in the world. Although it is in its primary function a private office building the Flatiron never stopped receiving great admiration upon seeing it the first time. 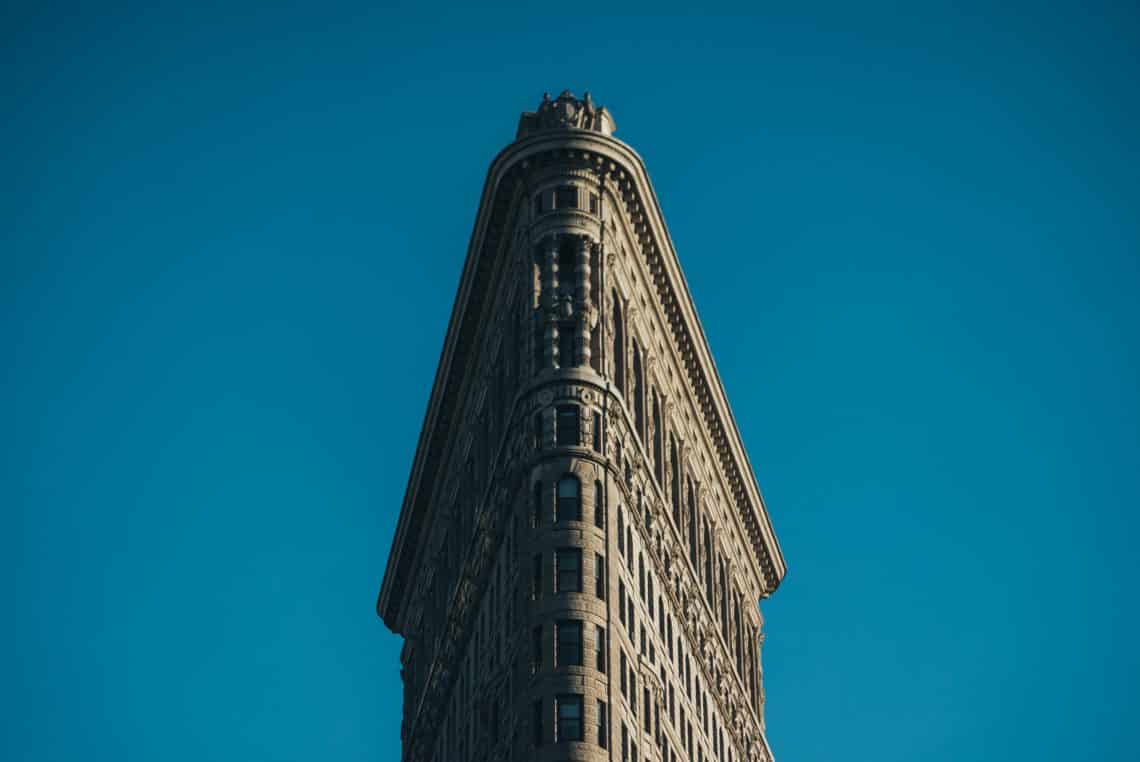 Since its completion The Flatiron Building was assigned as a New York City landmark in 1966, added to the National Register of Historic Places in 1979, and designated a National Historic Landmark in 1989.

Though never one of the tallest buildings in the city, never the less the Flatiron is revolutionary in its own way due to its construction method.

What do you think about the Flatiron Building ? We would love to hear from you in the comment section below !