Frihamnen, the industrial harbor of Gothenburg (Sweden), is gradually losing its industrial character and is steadily becoming a new, central part of Gothenburg, open to be discovered and adopted by the citizens. The present state of transition, the traces of its former uses and the huge undefined spaces together make the area very attractive for the establishment and implementation of different kinds of cultural activities. Apart from polluted land and water, the heritage of this industrial port area is a series of fascinating functional objects and buildings and the spontaneous and fragile nature that somehow exists between asphalt, concrete and water.

The docks, created for turning ships, will lose their former function in the future. The water surface represents the blue part of the envisaged Jubilee Park. Imagining new uses and types of experiences, as well as links between the water, the land and the neighborhood, are crucial for the development of the whole area.

For sustainable urban growth and the creation of a specific harbor park at Frihamnen it is necessary to preserve the memory of the site by attempting to intertwine with old structures, both physically and emotionally, the feeling and the qualities of the current state of ‚waitingʻ for new uses, buildings and temporary interventions.

Establishing bathing in this rough and hostile environment is, above all, a way to change the perception of it: creating intimate spaces, new leisure experiences and the opportunity for communication between different groups of people. Since water pollution does not allow, for the moment, direct bathing activities in the docks, the establishment of Bathing Culture activities will generate a form of prediction for the future of this particular setting.

Bath as a forum

Public baths were once an intense place for social gatherings in our cities. They were places not only for relaxation and sport but also for politics, discussion, business deals, eroticism, hedonism and crime. This has been lost in our cities and substituted with the more bleak and leisure-based public swimming pools and spas. We see the baths as a social space to meet people, spend time together and discuss life. The sensorial qualities of the baths provide us with a place where there is no competition, consumption or spectacle, but where the focus is purely on sharing spaces and thoughts, and enjoying and benefiting from the water.

City planning as a process

Working on an abstract level of city planning, Raumlabor has specialized in dynamic master planning. Activation through use is the central approach. Multifaceted use of public space is a driving force for the development of vibrant, contemporary and adaptive neighborhoods. We seek to invent new, user-based applications and involve various urban players as early as possible in the transformation processes.

Raumlabor are committed to dealing with places 1:1, discovering and using what we find within the conditions at the site. In the process of doing, we learn more about the investigation site through active Design and finding new methods that are open to appropriation and upgrading existing methods. We do not always solve problems; we initiate processes that give players the opportunity to get to know, understand and use the city and its dynamics, as well as its possibilities.

‘Living together’ is not an end in itself but a process. That is why it is important to plan and build the prototype together with the people who will in the future use and manage it. ‘Building together’ is also an opportunity to bring people from different social classes and with different ethnic backgrounds together for a meaningful experience. The idea is to give them an opportunity to do something that they would normally never do: to expand their city living by giving them the chance to create their own space in the cities.

Working on the site

Working with our team in the harbor for several weeks totally changed our perception of the site. First we got to know all the people who already use the space. These are not just the people who go there for the suggested activities, such as roller derby, film nights and the gardening group. They also include people who bring their own tools and hobbies to the harbor, such as remote-controlled drones, asphalt surfers or people who go there to practice driving cars or motorbikes. There are also frequent spontaneous users, such as joggers, people walking their dogs or couples who simply go there to relax and enjoy the sunset.

This made us think about the whole of Frihamnen as a park despite that fact that most of it is asphalt and that is still underutilized considering its central location in the city. But it is already a space that has a very special atmosphere and very different from the other more urbanized public spaces in Gothenburg. There is a feeling of openness and potential in this extensive area. In the light of its proximity to the historical city centre, its ability to still keep its distance is perhaps the most fascinating characteristic of the park as it is at present. Sitting on the wooden piers next to the water as the fishing boats come in with their throbbing diesel engines produces a feeling of being in a very special space. It is as if the large ships passing by connect you physically to the open sea, creating a different scale of freedom of space.

The choice of materials enhances the intended dramaturgy for visitors to the bath. Cold and weathered metal on the outside, ready-mades from naval equipment, produce the sensation of something that could naturally belong to the harbor site. The wooden path with its pattern, the physical and visual connection between the different buildings, recall floating wood pieces along the shore.

The larch shingles of the sauna interior, made of thick veneer, are thin enough to react to the changes of temperature and humidity so that their shape changes in use. The warm space breathes with the visitors. The direction of the shingles’ pattern on the walls and ceiling creates at the same time an embracing space and a focus on the view out of the big window towards the silhouette of the cranes and the city center. This visual connection between the new intimate space inside the „hostile“ harbor environment and the old city was from the beginning a crucial aspect for the choice of the site.

There are layers of information, which we do not get from regular plans and brief site visits. In previous planning projects we started to map these layers of subjective findings and programmatic overlays in whatare termed ‚potential mapsʻ. A ‚potential mapʻ is intended as a means of collecting, visualising and locating all the existing uses, hidden qualities and potential players for a specific public space. Together with Platsbyggnad, we have begun to draw a potential map for the Jubilee Park. The potential map should be displayed to the general public and be constantly updated. It could become a tool for communication, participation and negotiation for the building of this new neighbourhood and park. 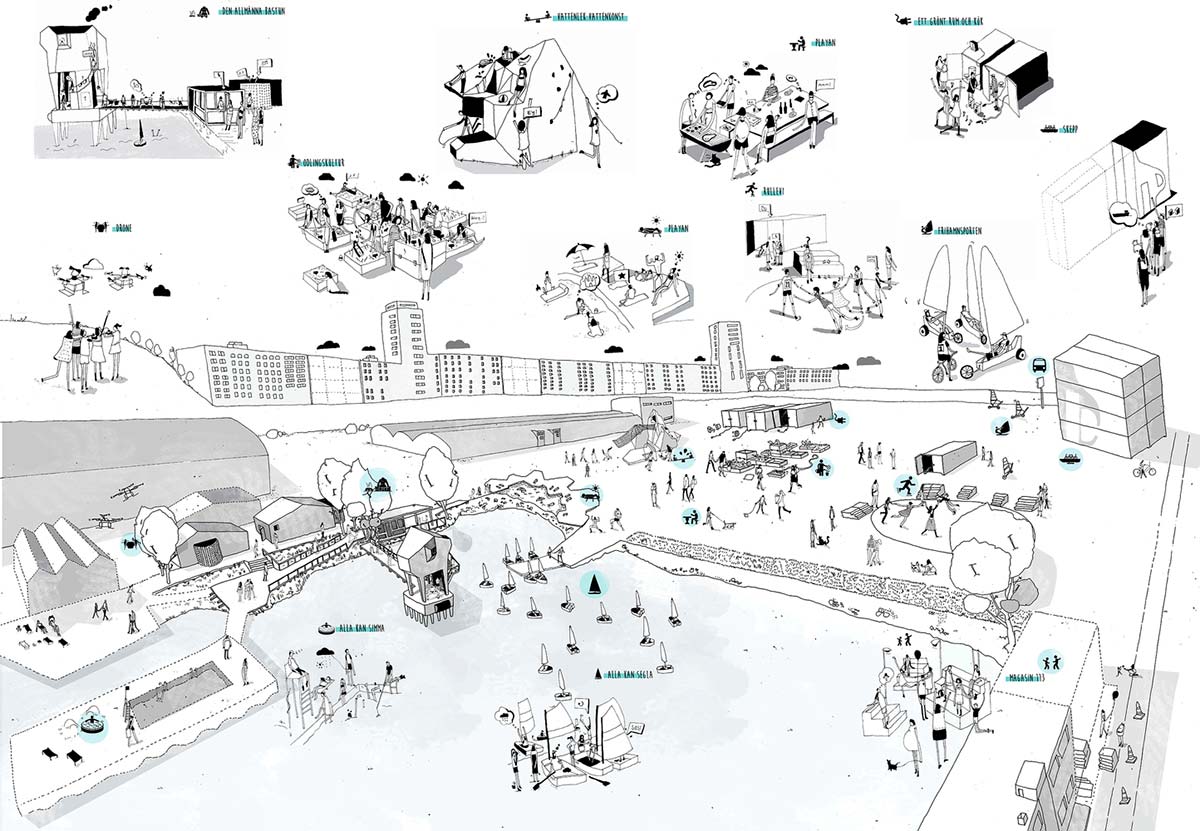 A third tool that Raumlabor proposes for the development of Jubilee Park 0.5 is a map that identifies, locates and presents the diverse wishes and desires of different individuals, groups and institutions and projects these into the new park and neighborhood. This should be a tool to illustrate all the different thoughts about this future part of the city before we even start to judge and negotiate these desires in terms of feasibility and contradictions. This map in particular should be updated frequently within the process in order to include the growing number of voices and show how the imagination of the future changes in such an open planning process.

open call one / building together

In September 2014 we asked people from all over Gothenburg to participate in the building process during the first phase of Bathing Culture. In line with our idea of designing and building collectively in open processes we came to the Jubilee Park with a mixed team of architects, carpenters, designers and a cook. During the open call week the building process had already started and our team was about to finish the wooden piers along the water line. In all, 24 people with different professional backgrounds, ranging from students of design to artists and town planners, came to build with us and discuss the future potential of the site and the park.

The building workshop was arranged in the form of three groups that took on different tasks. One group was working on the small entrance pavilion, building walls from the old windows that we had bought from a second-hand supplier. Another group worked with Todosch, an experienced stone sculptor at the central circular square. They used granite pavement corner blocks provided by the Gothenburg Parks and Landscape Administration. A third group started to build the shower room with walls from empty wine bottles.

This first participatory workshop in the bathing project helped us to understand the site and the city much better. While lifting the heavy granite stones to build the little square, there was a lot of conversation about the possible future of the newly opened Frihamnen. We could learn a lot about the neighborhood and its relationship with the whole city. While working, a lot of wishes regarding possible programs and atmospheres were articulated in the different teams. These conversations opened up scope for imagination and speculation about the future of the park, which went far beyond the building projects that we were working on together.