After launching its Home Collection in January 2004 that consisted of standard designs as well as re-releases and new products by current designers Vitra occupied a new market. In addition to the past clientèle whose main focus was office furnishings and consisted of business clients the new clientèle consisted mostly of individuals with a personal interest in design.

Considering that there was no appropriate space on hand for the display of the Home Collection on the Vitra Campus in Weil am Rhein, the company appointed architects Herzog & de Meuron based in Basel to design the VitraHaus in 2006. The striking location and compelling appearance of the VitraHaus set it as an essential role of the VitraCampus and further amplifies the outstanding Vitra architecture. Positioned on the northern side of the terrain the VitraHaus makes a connection between two other buildings in this area, the Vitra Design Museum by Frank Gehry (1989) and the Conference Pavilion by Tadao Ando (1993). The largeness of the ground made it possible to place the new building a good span away from the Vitra Design Museum and the gatehouse near by it, which resulted in a vast orchard meadow in front of the constructions as a well known feature of the regional landscape.

Built as the new flagship store to the Vitra Home Collection the VitraHaus gives visitors the opportunity to experience the designer furniture in inspiring arrangements, it is a place where they can find inspiration for their own homes and order and purchase furniture and design objects.

This main aspiration of the building, presenting furnishings and objects for the home, was what the architects Jacques Herzog and Pierre de Meuron had in mind when they returned to the idea of the ur-house for design inspiration. Due to the proportions and size of the interior space, the domestic scale as the architects refereed to it, the exhibit spaces are evocative of a familiar residential settings . The theme of the archetypal house overlaps with the theme of stacked volumes, two themes that appear frequently in the oeuvre of Herzog & de Meuron.

The twelve individual houses, arranged into a total of five stories, rise up to 15 metres over each other, creating a stack of houses that almost looks disorganized. The floor slabs cross with the gables under them making a three-dimensional abstract shape that measures 57 metres in length, 54 meters in width and 21.3 meters in height and overshadows other buildings on the Vitra Campus. The main goal was to design a vertically oriented structure with a small footprint, contrasting to the common type for production facilities – the horizontal building, and not only provide an overview of the Vitra Home Collection, but also a view of the enclosing areas – near and far.

The vertical structure, almost as if it is a small city, the VitraHaus acts as an entrance to the Campus with the charcoal colour of the exterior making it part of the surrounding landscape. The open zone made of wooden planks represents a central area, surrounding it five structures create a unified group: an expo space for the presentation of the chair collection of the Vitra Design Musem, a conference area and a shared space for the VItra Museum Shop with a lobby where the reception and cloakroom are as well as a café with an outdoor terrace used during summer. The circular tour starts from top to bottom with a lift taking the visitors to the fourth storey. The first thing that appears, upon opening the lift doors, is the view of the Tüllinger Hill on the northern side of the room and on the opposing end a panorama of Basel with the industrial facilities of the pharmaceutical sector. By following the views of the surrounding landscape designers created the path through the VitraHaus as well as positioned the building by understanding thoroughly its location.

Just as interior and exterior spaces interpenetrate, so do two types of forms: the orthogonal-polygonal, as perceived from the exterior, and the organic, which produces a series of spatial surprises in the interior, a “secret world” with a suggestive, almost labyrinthine character. /Herzog & de Meuron

With this in mind one understands that the intricacy of the in-house space does not come only from the intersections of the staggered singular houses but that it also includes a another geometrical concept. All of the staircases connect into a voluminous, winding organic path that makes its way through different levels of a building sometimes putting in focus the alluring visual relationships between various houses, and other times closing all views to open spaces and allowing the displayed furniture to have the main focus. In addition the interior walls are painted white as to give full attention to the displayed furniture.

VitraHaus does not only live in the daytime, during the night it gives a completely new perspective. During the day VitraHaus represents a frame for the outer landscape, one gazes from it into the surrounding scenes, but when night comes, the interior comes to a new, different life with the illumination coming from within, its physical shape seems to disappear the building glows. The rooms lose their boundaries and the glazed gables turn into shinning displays that illuminate the surrounding countryside around the Vitra Campus. 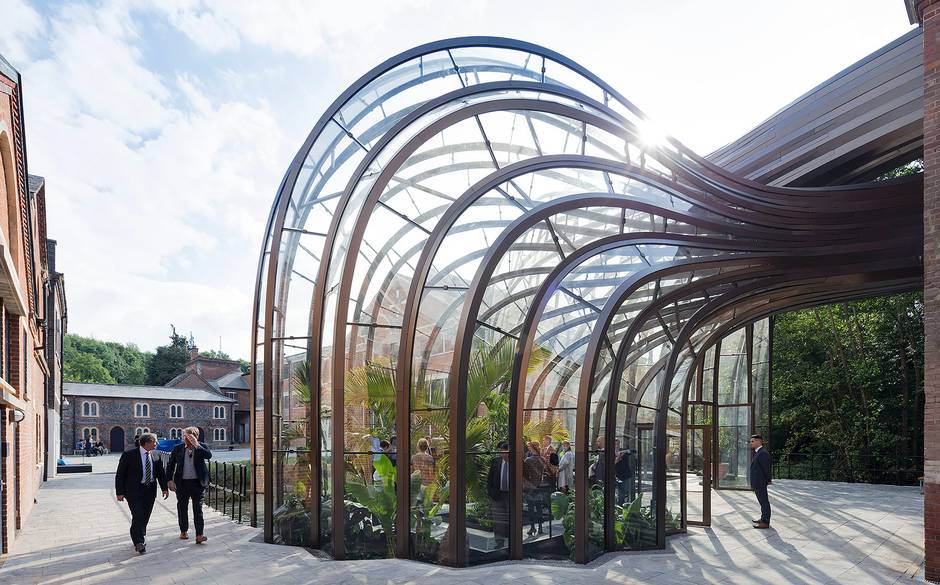 September 26, 2014
0
British design maverick Thomas Heatherwick has created a distillery like no other for Bombay Sapphire gin