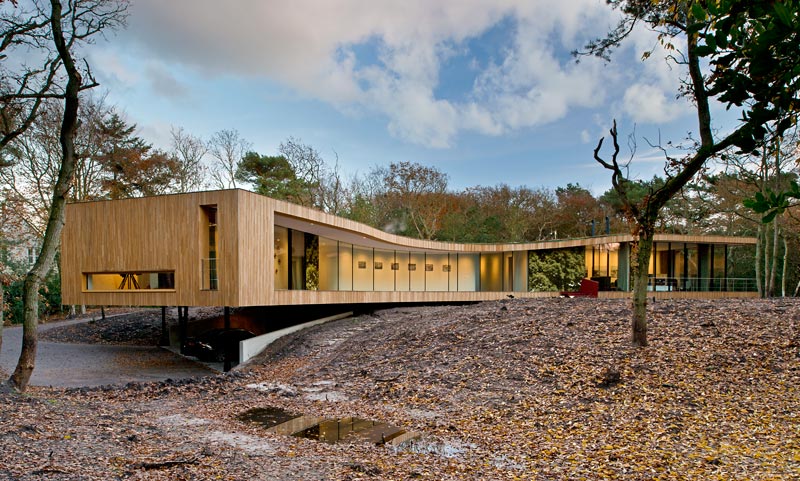 In the municipality of Bergen there are many historic beach ridges. Similarly, on a 7000 square meter plot on one of the most beautiful avenues of the North Holland town. The approximately 2.5 meters high ridges arose around six thousand years ago. As soon as there are building plans such ridges will be removed most times, in order to get a flat surface. This was not done for Villa K. In fact, ARCHITECTENCSK gave the old beach ridges a central place in the design. 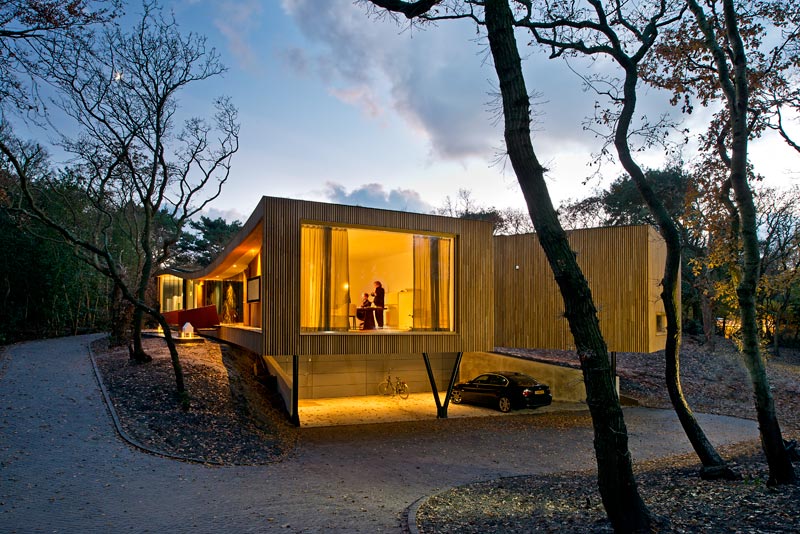 The villa is 830 square meters and has four bedrooms, four bathrooms, an office with separate entrance, and a garage for three cars. Initially, the client just bought a plot of 35 by 100 meters. The maximum design width was 17.5 meters, the longitudinal direction was 50 meters. Later, the client bought a second, adjacent lot. The length of the lot is emphasized by the length of the villa. Both ends of the mass are cut and extended. This creates a natural separation between the living room and kitchen and between office and bedroom. 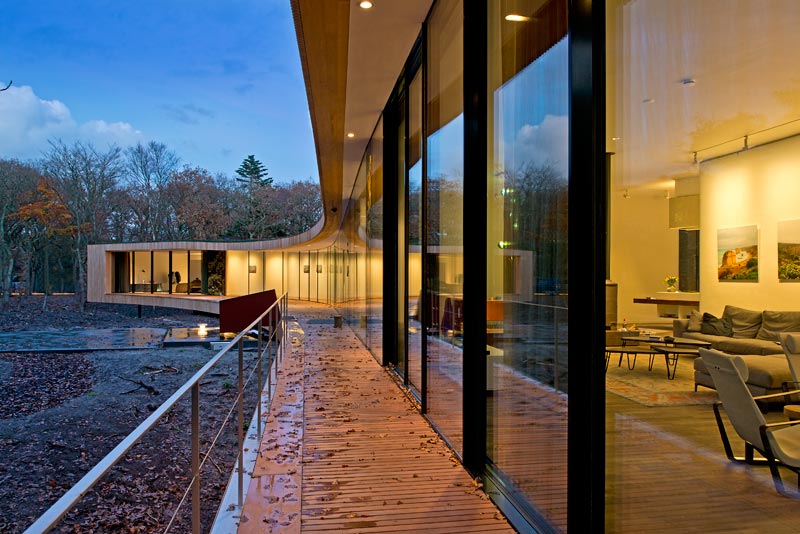 Nearly 50 meters long and 19 meters wide Villa K is apparently located in an uncompromising on top of two beach ridges, but at the same time it creates various spaces between these natural curves which firmly anchor the villa in its environment. At both ends the house seems to float above the beach ridges. This is impression is amplified by the different heights in the villa and the overarching, undulating concrete roof that gives a counter movement against the beach ridges. At the forest side the height of the villa is 4.5 meters, so that sufficient light comes into living room and kitchen. 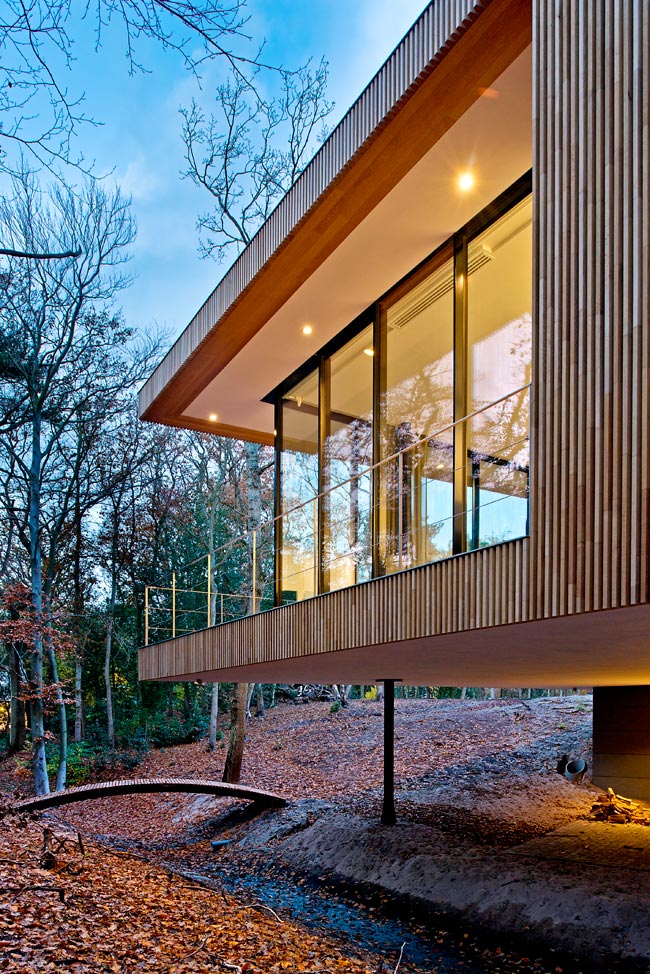 Glass and wood dominate the exterior. The wooden walls are made of vertical oak profiles. The long facades are almost entirely of glass. On the parts with concrete walls behind them a tree print has been applied to the glass, a nod to the oak forest in the area. The glass itself is a sandwich construction of less than 80 millimeters extra clear float glass. This material has a lower iron dioxide content than standard float glass. That makes the color brighter and therefor the glass has a higher light transmission. The thickness was necessary in order to achieve a higher energy performance. The glass panels are curved and also domed at the top. The heaviest panels weigh over 2200 pounds. 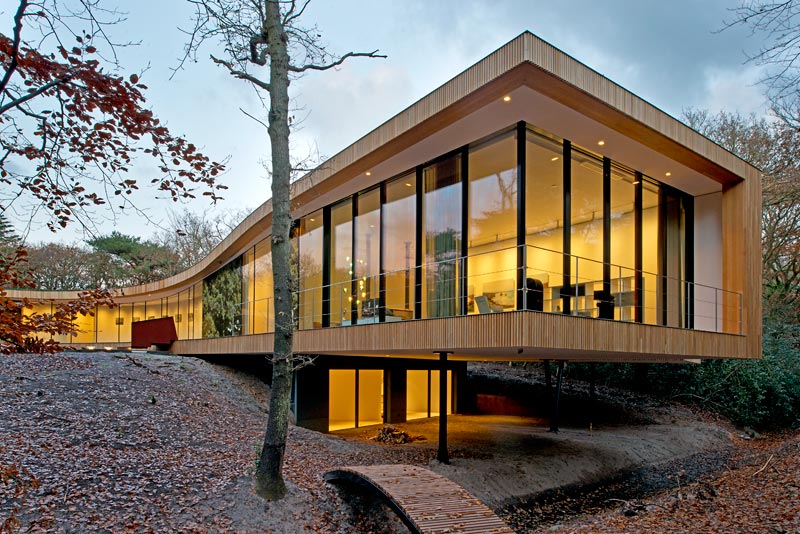 For energetic reasons a concrete base structure was chosen, which gives the villa sufficient mass. All concrete was poured on-site. This allowed the creation of overhangs at the ends of the villa. 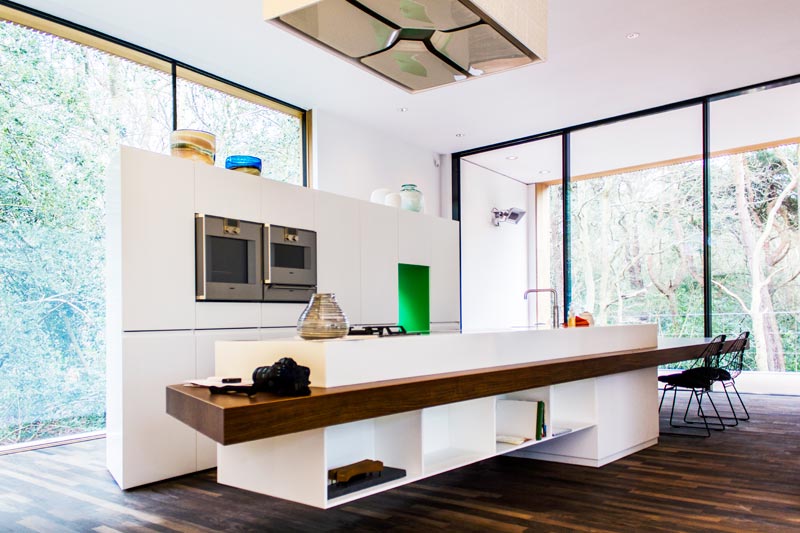 Villa K is energy neutral. It is heated and cooled with a heat pump. The municipality ordained that rainwater has to be discharged on-site. Therefore a moss-sedum roof was chosen which enables the removal of rainwater in a very regulated way. Other advantages of this vegetated roof are higher insulation, better sound absorption, more absorption of particulate matter and longer life of the roofing.