Home DIY Projects & Ideas How To Read A Thermal Imaging Camera? | All You Need To... 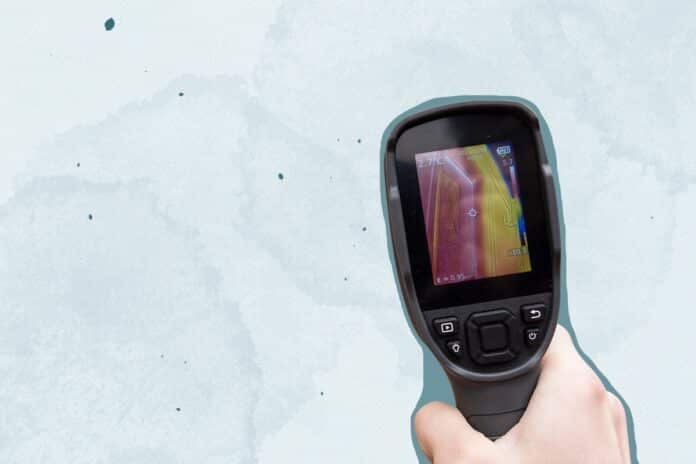 To read thermal imaging cameras, you need to be familiar with a number of specifications, such as resolution, sensitivity, emissivity, etc. You will also have to understand the three principles on which the camera functions, namely – absorption, transmission, and emission.

The best thermal imaging camera can help you see things that are hidden from the human eye.

Also known as night vision cameras, these devices can visualize the temperature of objects and living beings. They are quite handy and can help you detect leakages, missing insulation, etc.

However, like other appliances, you need technical knowledge to operate infrared cameras. And to buy a good model, you need to master the basics of reading thermal imaging cameras. Let’s start from the get-go and understand what thermal images are. A thermal image or a thermogram is a visual map of a surface temperature. It basically gives a measure of the infrared radiation emitted by an object or a living being.

While thermal images are invisible to the naked eye, they can be captured using thermal cameras. By viewing the thermal image of an object, we can determine its temperature and spot issues then and there. What’s lesser known about thermal imaging cameras is that they don’t rely on visible light, and that’s why they can detect objects in dark or dimly-lit areas.

Every object that lies above absolute zero or -459° F releases infrared radiation. This property is popularly known as blackbody radiation in the world of physics.

When the subject is at room temperature, it emits radiation in the infrared range, but as it heats up, the radiation enters the visible spectrum and gives off a dim red glow. If the temperature increases further, the radiation releases energy in ultraviolet wavelengths and can go beyond that.

For the time being, we are only concerned with infrared wavelengths, so let’s discuss that in detail. Infrared light comprises light of long wavelengths slightly beyond our perception of red wavelengths in the visible spectrum. This light is easily absorbed by objects around us, and as a result, their kinetic energy escalates, which ultimately increases their temperature.

And by precisely measuring the radiation emitted by a body, we can create an actual thermogram.

Want to know how to use a thermal imaging camera? Here we’ve enlisted a few factors that play a crucial role in the functioning of thermal cameras:

Different matter absorbs specific wavelengths of light at diverse rates, which affects its temperature. So, understanding absorption is essential to comprehend other important factors that influence radiation detection in thermal cameras.

It’s true that matter absorbs light, but it also transmits certain wavelengths of light, soaking up some while reflecting others. Since no matter is present alone or in a vacuum, radiation from other objects can be transmitted by your subject into the camera.

At a particular temperature, objects of diverse materials emit radiation at different levels. For instance, aluminum is highly emissive, but wood isn’t. This is an important property to understand, as it explains even if the objects are at the same temperature, their thermogram can appear different.

How To Read Specifications Of A Thermal Imaging Camera

To read the specifications of thermal imaging cameras, you need to be familiar with the following terms– only then will you be able to choose the right device.

Resolution determines the clarity of the infrared images and is directly proportional to the pixels your thermal imaging camera offers. This means the more the number of pixels, the higher the resolution and the clearer the picture will be. Thermal cameras have three standards of resolution:

The resolution you opt for depends on your needs and the usage of the camera. If you plan on using the device for risky electrical appliances, you will need a thermal camera with high resolution to look into the issue closely.

Thermal sensitivity, or NETD (Noise Equivalent Temperature Difference), refers to the ability of a thermal camera to recognize temperature differences. It influences the clarity of the object you’re troubleshooting using an infrared camera. Higher sensitivity means you will be able to see even minute differences between cold and hot surfaces.

NETD is the specification used to express the sensitivity of a thermal imaging camera. The higher this value is, the lesser the contrast between different temperatures. A straightforward way to remember this is – low noise means high clarity.

As the name suggests, the field of view is the area captured by the lens of your thermal camera while imaging. This value depends on three factors – lens, sensor size, and the distance to the item or surface you want to measure.

Basically, it gives a measure of the surface area detectable by the thermal imaging sensor of your IR camera. In a way, it can be compared to the zooming capability of a standard camera.

Furthermore, it is measured in angular degrees, which is different from temperature. If you want to study an object which is close by, you will need a camera with a large field view. On the other hand, opting for a narrow field of view will be the best bet for far-off objects.

Moving on, spatial resolution or the instantaneous field of view refers to the tiniest detail of the image captured by thermal cameras within the field of view. This specification is measured in mRads; the smaller its value, the greater will be the clarity of the image.

A palette in a thermal imaging camera is the color scheme used to show a thermal image. It is typically seen in the following gradients:

Another important specification of a thermal camera is emissivity, which is the energy emitted by a surface in the form of infrared radiation. Now, don’t be alarmed if you see a tiny value, as this parameter ranges from zero to one. An object with zero emissivity is a perfect reflector, while that with an emissivity value of one is a perfect absorber that doesn’t reflect light at all.

The ideal emissivity value for you depends on the surfaces you intend to measure. For example, some cameras have an adjustable emissivity that fluctuates between 0.01 to 1, whereas others have preset selections. Some of the presets are:

The range of thermal imaging cameras specifies the area in which it measures accurate temperature. If you work in areas with extremely high or low temperatures, get a camera that is designed to measure extreme temperatures.

Some applications of thermal cameras in day-to-day life are:

Water has a very high thermal capacity, meaning it takes a lot of time to change its temperature. In fact, it emits two to three times more thermal radiation than other materials like concrete, drywall, wood, and insulation. Thus, thermal imaging cameras are a must-have for every home because they detect moisture and come in handy in pinpointing the source of water leaks.

The fact that thermal imaging technology can be used from a distance makes it quite handy to inspect HVAC system performance. You can spot the vents where performance has been compromised by inspecting them using your infrared camera.

In addition to that, the device can also be used to spot compressor leaks in ACs. The procedure is simple, as the part which is hotter than the rest of the vents will appear in a different color. This will let you know where the leak is, and you can get it repaired without any delay.

Warming up your home in winter consumes a lot of energy and fuel. Some people use fireplaces to do so, while others turn to thermostats. But whatever the case, keeping your house well insulated is of prime importance, as any heat loss can bring down the temperature and make your home chilly.

Additionally, you won’t even realize that there is missing insulation until it’s too late, and you might end up spending more than usual on energy bills. That’s why it is practical to inspect your home for possible heat loss spots using an infrared camera. Once the leakage point is detected, you can get it insulated and save up on resources.

Just like finding water and moisture leaks, temperature differences can also help you find faulty wiring and other electrical hazards. And the best part is that you can investigate them from a distance, without any risk of getting an electric shock. How To Read A Thermal Imaging Camera Verdict

And as these devices blend visual images with thermal ones, detecting hot and cold spots won’t be much of a challenge. Also, make sure you invest in a high-quality model because they detect temperature differences with accuracy.

Once you get the basics right, using thermal cameras can be as easy as knowing how to use a calligraphy pen with ink. So, are you thinking about getting one for yourself? Go ahead and order the best thermal imaging camera today! How To Make A Bean Bag? | Bean Bag Making Tips

August 10, 2022November 18, 2022
0
Nothing sounds more relaxing than sinking into a bean bag after a long day’s work. And to maintain its structure and comfort, using the...