The iPad is a wonderful slab of technology.

Originally launched as a bigger version of the much-loved iPhone, it has rapidly upgraded its status in the tech world as a more of a mini-computer than an enlarged smartphone.

Case in point, the new iPad Pro. Launched recently, it sports better hardware than most mid- to high-range laptops.

Little wonder, then, that Apple marketed it is a professional tool apart from an entertainment device, as it has the hardware to handle even the most demanding jobs.

Artists will appreciate that as the masterpieces they create with the Pencil can get taxing for a conventional laptop.

Artists will also appreciate the vast multitude of drawing cases that have spawned for iPad these days, which protect the field-dominating tablet as well as enhance its functionality.

But which one do you buy? Fret not, because we’ve rounded the six best cases for you, so let’s start with number one.

The first product on our list is the Elevation Lab DraftTable.

Elevation Lab has been in the business of making iPhone docks and other Apple accessories for some time, so they’re well-acquainted with Apple’s lineup and their design philosophy.

This fact reflects in the design of the DraftTable. 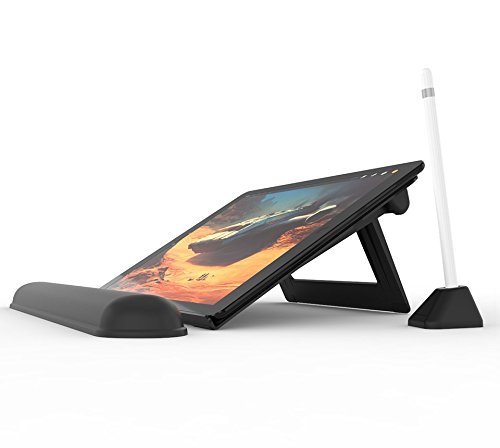 It features three stands on the back, and they feature wide angles of adjustability. They also fold flat for when you go traveling with your iPad.

The DraftTable Kit, apart from the cover, also ships with an armrest, which makes drawing and working for long hours a breeze and reduces fatigue to a great extent.

The DraftTable kit also features a stand for the Apple Pencil, which means you never have to worry about misplacing it or knocking it over your table’s edge.

On to the DraftTable’s construction, the top is made from laser-cut steel whereas the stands are made from glass-reinforced fiber. Both these materials are solid and should your iPad suffer an unfortunate drop, it shouldn’t be a problem if you have this case on.

The cover ships in a matte-black and has a textured back, lending a premium feel to it while enhancing grip in hand.

To conclude, this is a great case to buy if you’re the kind of artist who works at home more than they work outside, as the DraftTable transforms your iPad Pro into a proper notebook laptop.

The second item on our list is the Fintie iPad Pro Case.

Unlike Elevation Labs, Fintie is a mass-producer of cases and accessories for most mobile phones and tablets, so they don’t specialize in Apple products.

However, that does not imply that their iPad Pro case lacks in quality in any way, far from it. 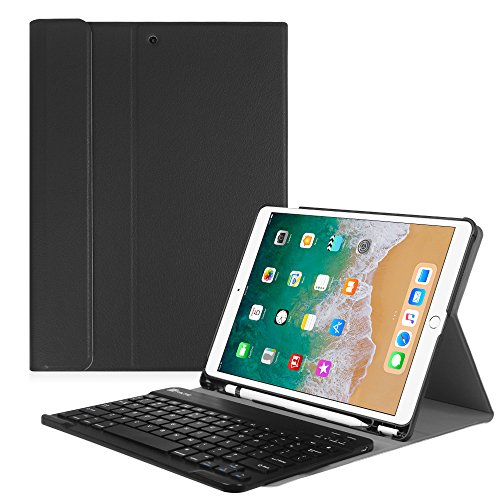 As opposed to the DraftTable, which was a case for working on a desk with, the Fintie is built for people who remain on the move.

Unsurprisingly, the Fintie is available only for the 10.5-inch variant of the iPad Pro, as it prioritizes portability over functionality.

It has a single stand which adjusts to five positions and thus provides the iPad Pro with five viewing angles. The stand is magnetic, meaning you can work with the assurance that the stand won’t collapse unexpectedly.

The cover also features a built-in Pencil holder, on the left edge of the iPad (when viewed in the default portrait orientation). 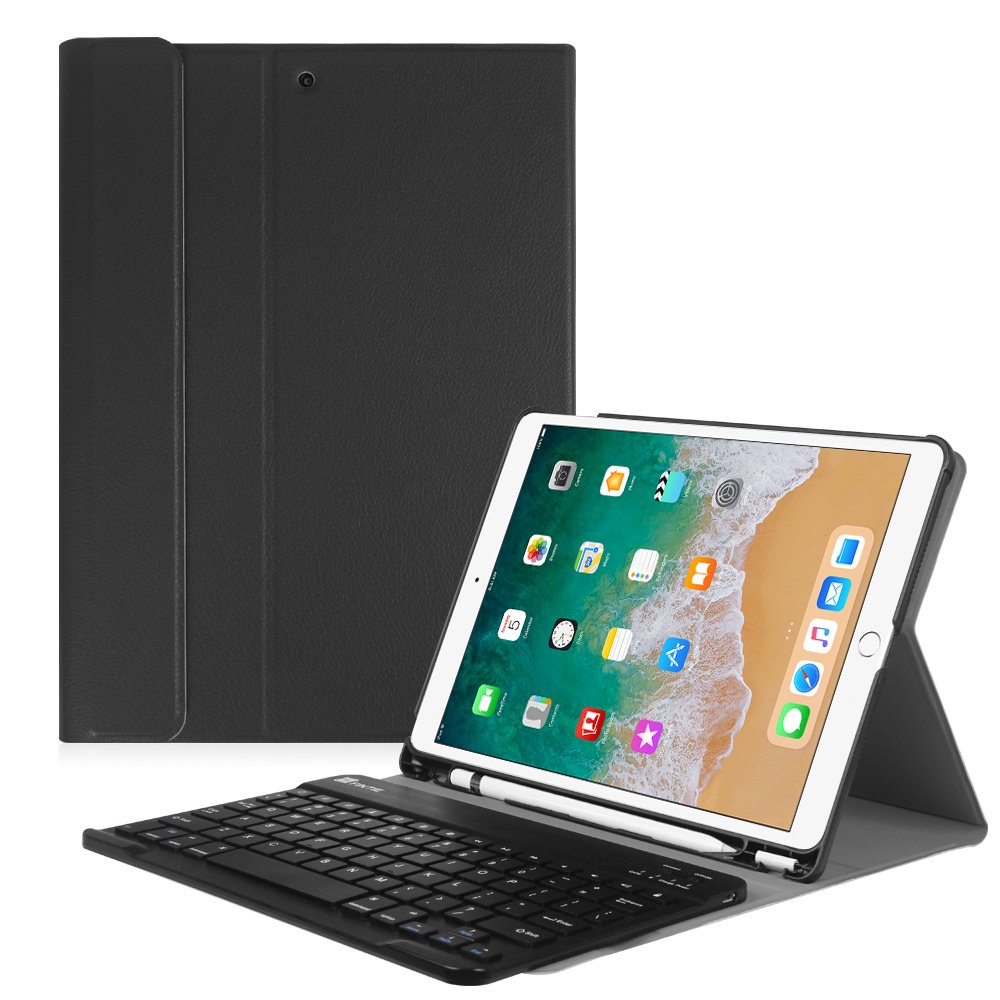 It’s made of soft leather on the outside and features a microfiber interior. This combination provides maximum protection from drops and also prevents unwanted scratches on the finish.

Lastly, this is a ‘smart’ cover, meaning it will wake and put the device to sleep accordingly when the cover is opened and closed.

The third item on our list is the DEFENDER case by Otterbox.

As the name suggests, this case emphasizes device safety over anything else. If you’re slightly clumsy and prone to dropping things frequently, then this case is for you.

The Otterbox comes with bouncy silicone pads on the edges to keep the iPad from absorbing the force, should it fall. 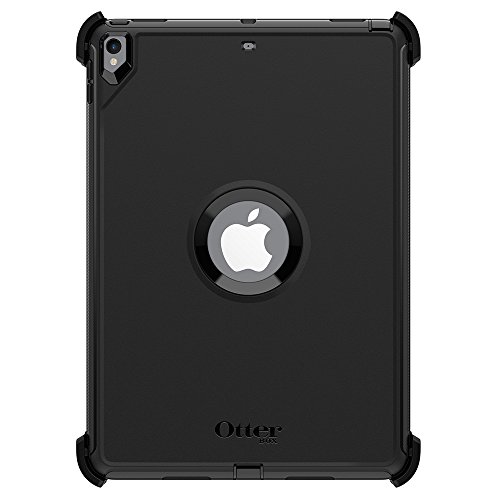 It also features two layers of protection; an inner shell and an outer covering. Apart from those layers, it sports a touchscreen protector as well, meaning your iPad is completely protected from any sort of mishap.

The Otterbox features port covers as well. These covers protect the accumulation of lint in the ports, which might hamper operation. 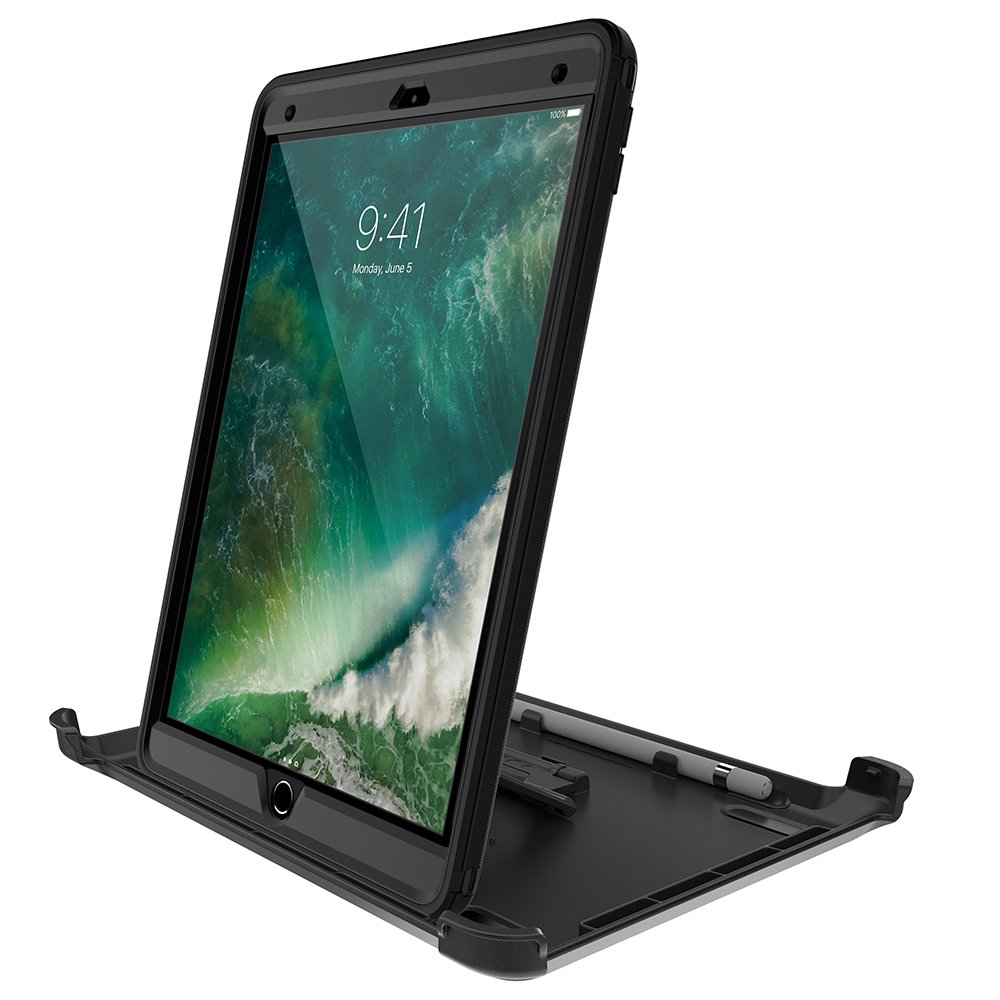 The cover includes a stand as well as a dock for the Pencil, so you still get a fair amount of functionality with it.

The fourth item on our list is the Clear Hard case from ESR.

This case is akin to the clear, transparent iPhone cases you can use to prevent its beauty from being obscured by a funky design.

The case is available in two finishes, a truly clear one and with a dark-grey tint. 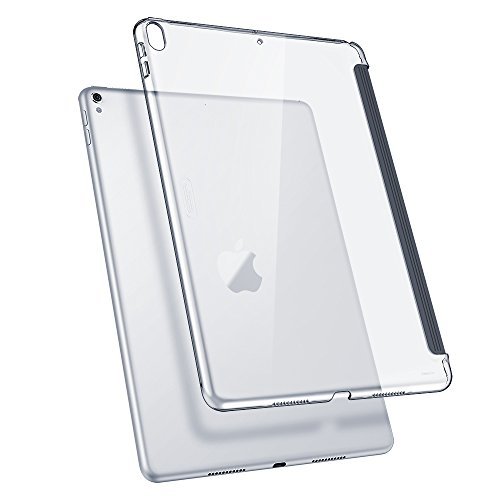 It comes with what ESR calls a ‘grip-strip,’ which makes holding your device easier and reduces the chance of it slipping out of your hand.

The cover features a matte finish, so it is resistant to fingerprint accumulation. It also features FlexPress buttons, which protect your device’s buttons as well.

The ESR’s party trick, perhaps, is its ability to fit perfectly onto the Smart Keyboard without any loss in operation and functionality. ESR claims the cover leaves enough space for the smart connector. This feature is very useful if you use a Smart Keyboard.

Lastly, the case is available only for the 10.5-inch variant of the iPad Pro and is made of hard plastic, as opposed to rubber or silicone. In our opinion, silicone would’ve been the better choice for a case like this, but the shell construction works well enough.

The penultimate item on our list is the ProCase Keyboard case.

As the name suggests, this case is primarily targeted towards professionals and includes a keyboard, which is a bold inclusion, considering Apple sells its Smart Keyboard.

The keyboard pairs easily and wirelessly with your iPad Pro. It features two stand slots and a built-in magnet to keep your iPad secured in landscape mode. 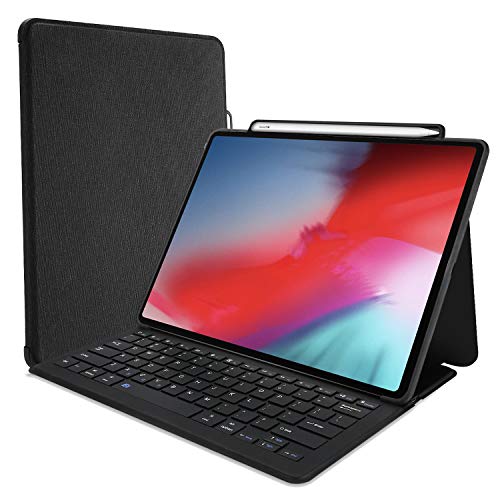 The keyboard has decent battery life and provides 100 hours of working time and 100 days of standby time.

It features Chiclet keys as well, which make typing a smooth and enjoyable experience.

An iPad Pro case wouldn’t be complete without a Pencil holder, and this one features a holder as well. It supports Apple’s wireless charging feature as well.

A leather exterior, a soft interior, and TPE edges make up the construction of the case and provide a premium and sturdy feel to it.

The case also supports auto wake/sleep features, and opening/closing are actuated by a magnet.

The ultimate item on our list comes from the manufacturer of the iPad itself and the world’s richest company, Apple!

To be fair, the Smart Keyboard isn’t exactly a full-fledged cover, as it covers only the face and not the back of the device.

This is the biggest complaint the cover has received, and due to this, it has a hard time justifying its price. 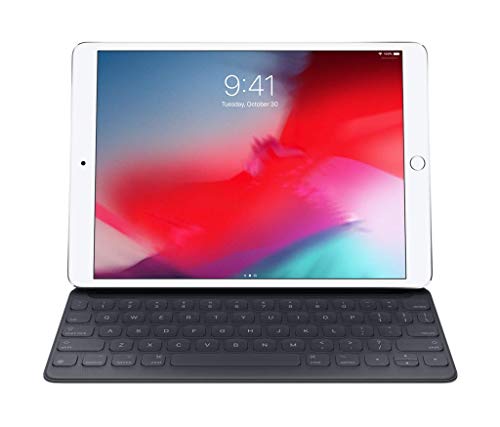 However, you could use the Smart Keyboard in conjunction with a back cover, but that means merely incurring more costs.

Onto the Keyboard itself, though, and we’re glad to tell you that it’s a wonderful addition to your iPad Pro.

It unfolds into a full-size keyboard which does not need pairing or connecting of any sort. It also does not require charging, as it runs off the iPad’s battery. 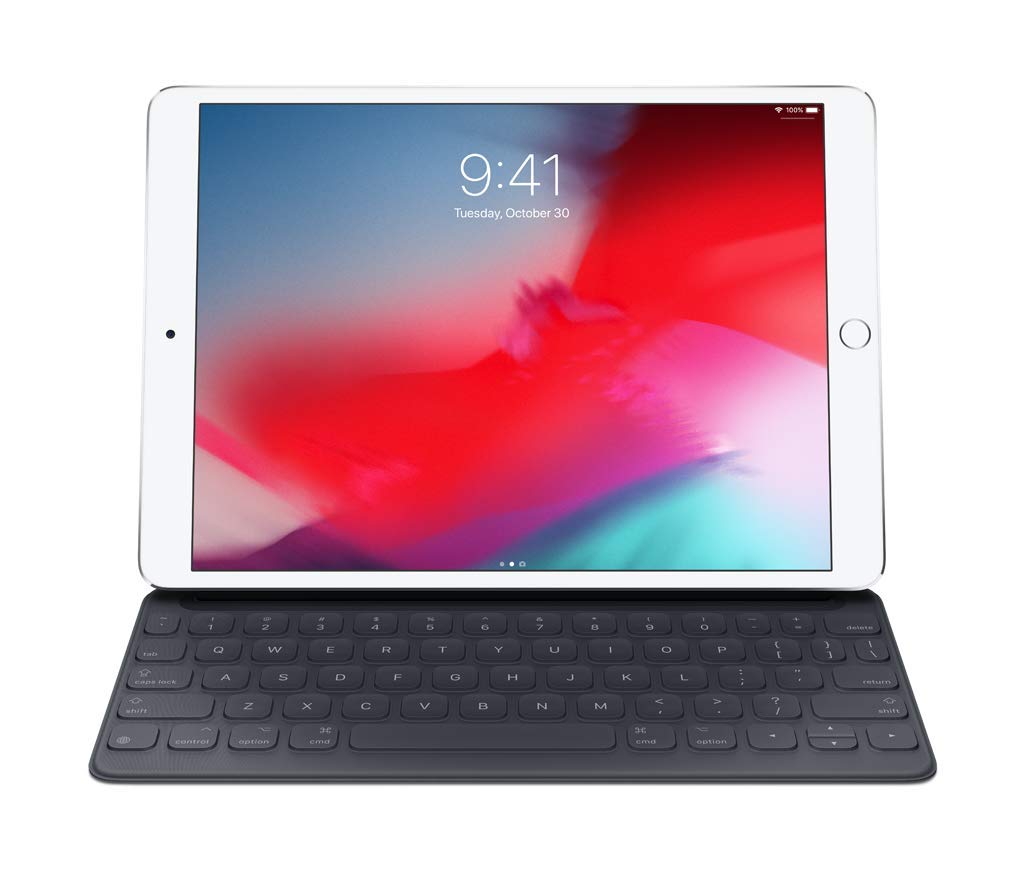 The keys are well-spaced and feel as premium as Apple’s other keyboards, making you feel like you’re typing on your Macbook.

When the keyboard is not in use, it folds onto the screen and serves as a premium screen-cover. It feels great and provides adequate protection for the screen.

The iPad Pro is a wonderful device which pushes the envelope not only as far as tablets are concerned, but as far as consumer electronics as a whole are concerned.

It finds use amongst a number of professionals from a variety of fields, and we’re focussing on artists today.

However, it is an expensive device, and lest you wish to weep after you inevitably drop it, we suggest you get yourself a case.

The cases featured here are suitable for artists and regular users alike. They have their pros, cons and specific applications, but they’re each great in their own way.

The 4 Best Tablets for Architects in 2019

Ultimate Guide Towards the Best Laptop for SketchUp Today

Simply the Best Mouses for Photoshop in 2019

The 6 Best Graphic Tablets for Beginners in 2019

Simply the Best Drones for Architectural Photography in 2020

August 28, 2019
0
Modern-day vacuum cleaners come in a variety of different shapes, sizes, and design.  From robovacs to handhelds, to canisters, there is indeed a lot to...