Logitech has often set the industry standard when it comes to computer accessories like keyboard and mice, and this one bears testament to their excellent work over the years.

Vertical mice have historically been intended to serve carpal tunnel sufferers, and they have been more clinical than functional. The MX Vertical stops that trend dead in its tracks and considerably raises the bar on what to expect from Vertical mice everywhere.

A super ergonomic mouse like this finds patronage in a number of different professions where you have to spend a lot of time with computers, which is pretty much everything nowadays. 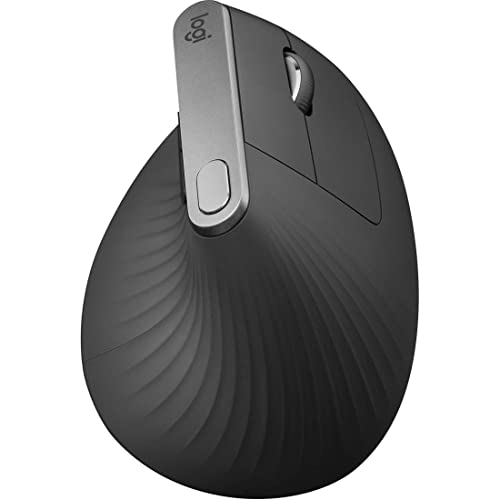 The MX Vertical has a design which is like the crest of a wave rising straight out of the sea. It has a gradual convex curve on the palm side with the buttons and a more exponential curve on the side where you keep your thumb.

You hold it the same way you would shake hands with someone. It feels super-natural and exerts minimal force on your hand. The wavy shape of the mouse contours to the shape of your palm and there is also a wide lip at the bottom, which you can use to rest your hand without ever letting it touch the mousepad.

The mouse is made of hard plastic, but both the two surfaces are topped off with a rubbery, ribbed layer, which is an absolute pleasure to rest your hands on.

In the looks department, most vertical mice tend to look like amorphous blobs of plastic and metal. However, this one is as elegant and sleek as it comes. It’s available in grey and darker grey, and I’m particularly partial to the darker grey.

This vertical mouse has a modest curvature of 57 degrees, thus it isn’t hard to hold nor does it look out of place. It will totally make for a very aesthetic addition to your work desk, especially next to a MacBook or a Surface. Both of these laptops are immensely popular and popular among graphic designers, video editors, filmmakers, and architects. Whether you’re using Photoshop or AutoCAD software, this is a very suitable mouse. If you want more suggestions, check out our list on the best mouse for architects. 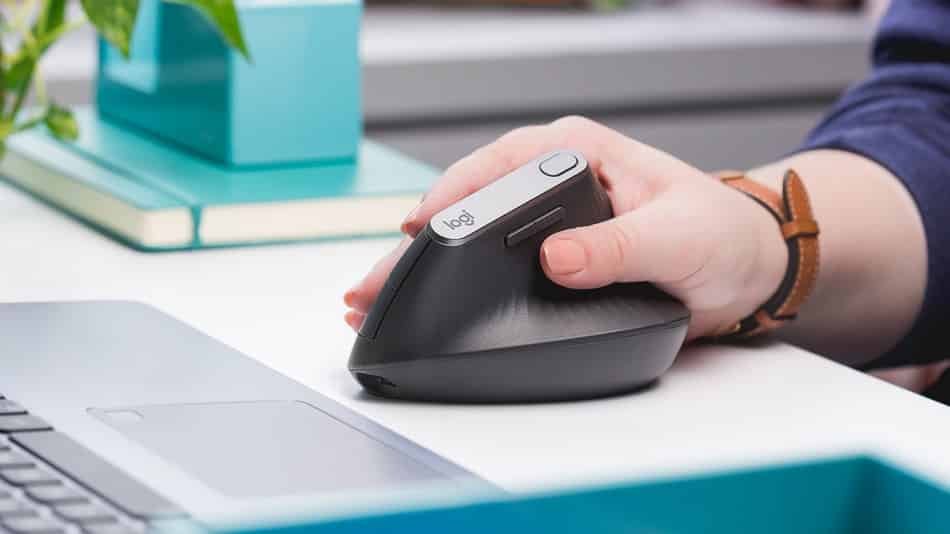 When it comes to hardware, this mouse covers the basics and then a little more. The standard left, and right mouse buttons are placed exactly where your ring finger and index finger will be. In between them, is a regular clicky scroll-wheel. The scroll wheel is rubbery and notched, which feels good on the tip of your fingers.

On the other side, there are two split buttons for your thumb, which are set to back and forward by default. There are no more buttons. I was a little disappointed that there weren’t any more, but i guess that would have ruined the ergonomic design of the mouse.

In the middle of the two sides, there is a plate which has a DPI switch button. At the front of the mouse, there’s a USB-C port which you can use for charging the built-in battery or if you want to use the mouse via a wired connection.

There are two thumb buttons on the left side, two split mouse buttons on the right where your ring and other fingers naturally sit, and a nicely rubberized and notched scroll wheel.  The middle-click wheel button and the two thumb buttons can be reconfigured to any keyboard function or functions like volume increase or decrease, or you can even use Logitech’s mouse gestures.

The mouse is topped with a metallic-looking plate, which also features a DPI switch button.

At the front of the mouse, there’s a USB-C port for charging the built-in battery or for using the mouse via a wired connection.

It is primarily a wireless mouse though, as it uses Bluetooth and can also connect via Logitech’s Unifying Receiver. The best bit is that you can use this mouse to work on up to three different systems, and you can seamlessly switch between your machines via another button at the bottom.

The MX vertical has a modest DPI range of 400 to 4,000 DPI. I say modest because it can’t really compare to today’s gaming mice. Be that as it may, it’s still pretty decent and this mouse is intended for professional software and not games, anyway.

However, the best feature is it’s on-the-fly DPI switching. What this means is that the button on the metallic divide can be used to change the mouse sensitivity from high to low with a simple click.

One single press of that button will take your mouse sensitivity from “low” to “high” DPI modes, and then it will take you back to low. However, the real ingenuity comes into play when you keep the button pressed.

This will bring up a window on your desktop with a sensitivity bar where you get to change the sensitivity exactly as much as you want. Move the mouse cursor left, and sensitivity decreases, which gives you greater precision. Move it to the right, and sensitivity increases, allowing you to cover more screen space with each cursor movement. You can bring this window up from within any program. 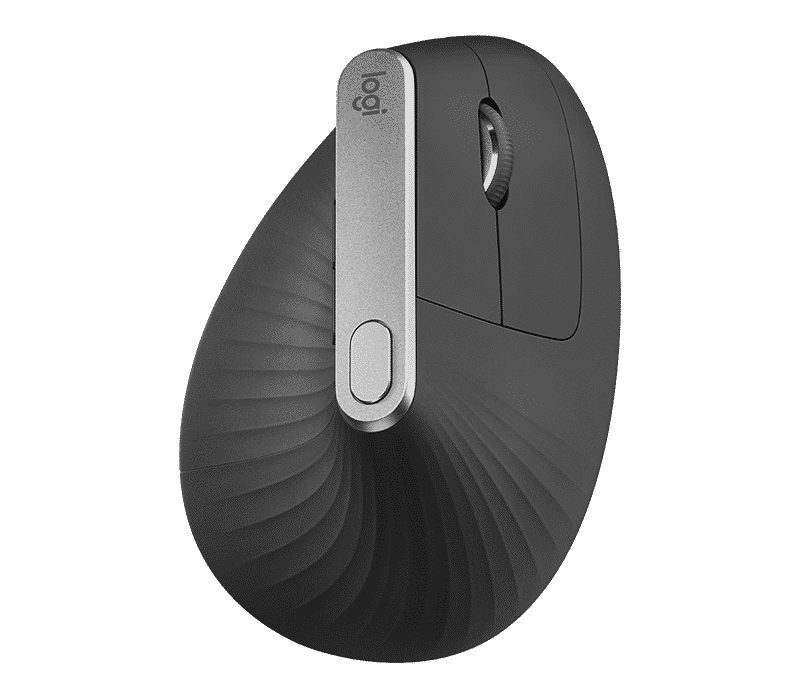 This is an excellent feature if you need to make constant adjustments while you’re working. However, you’ll need to have the Logitech Options program installed for this feature to be available.

Performance using the Unifying receiver was nothing short of flawless as we experienced no delays or lags whatever.

Connecting via Bluetooth might take a little extra time, though, as some laptops have pretty slow Bluetooth connections. But it connected to a Dell XPS in a matter of seconds in our case.

Logitech now has the triple-device pairing system present in most of its mice, and it’s definitely very helpful if you’re working on two or more computers simultaneously. The button at the bottom lets you instantly switch between the devices connected by Bluetooth or Radio Frequency USB.

However, there’s only one Logitech Unifying Receiver in every box, which isn’t really a problem because you can always use Bluetooth.

The battery is inbuilt and rechargeable, so you don’t have to go out and buy AA batteries every couple of months. It gets its power from the USB-C port in the front of the mouse.

Logitech says that one full charge will keep your mouse powered up for up to 4 months. While that may be an exaggeration, it will definitely keep going for at least 2 months with continuous usage.

However, the best bit is that the mouse charges up super fast -as only one minute of charging will give you three hours of wireless use. The USB charger, however, looks rather rugged and clunky, and it definitely could have been smoother. 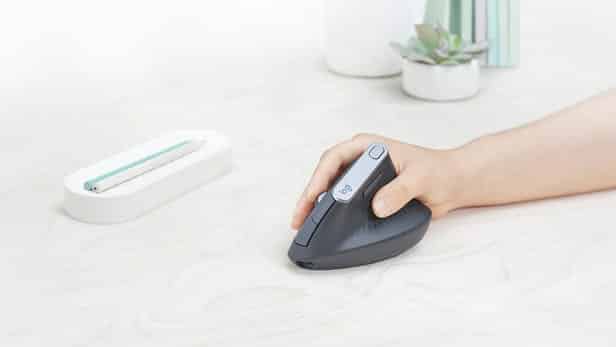 How Does It Feel While Using?

The grip feels exactly like a comfortable shake with a dear friend. The rubbery exterior allows for a very firm grip and there is no way your fingers are going to slip. Even after a full day of working and browsing the web, my hands didn’t feel sore.

The DPI is automatically set at low so that even without the software, you get high sensitivity when you first start using it. Most people never bother with the DPI settings and this configuration is primarily intended for them and so that the mouse can be used the way it’s meant to be from the get-go.

The mouse also feels really light -as if it’s barely there. It glides along as smooth as silk just like any mouse which is mostly hollow. However, when you pick it up, that’s when it feels a little heavy. It weighs a somewhat hefty 4.5 ounces on a weighing scale.

It’s really impressive that Logitech through some magic of their craft managed to distribute that weight through the material, the base-pads and the extended front lip, such that it doesn’t feel heavy at all.

Logitech still says that it is a desktop mouse though, and hence it is pretty large, and you’ll have to find some extra space in your bag if you want to carry it around. It weighs as much as most gaming mice, but it does seem to be a lot easier to move around. 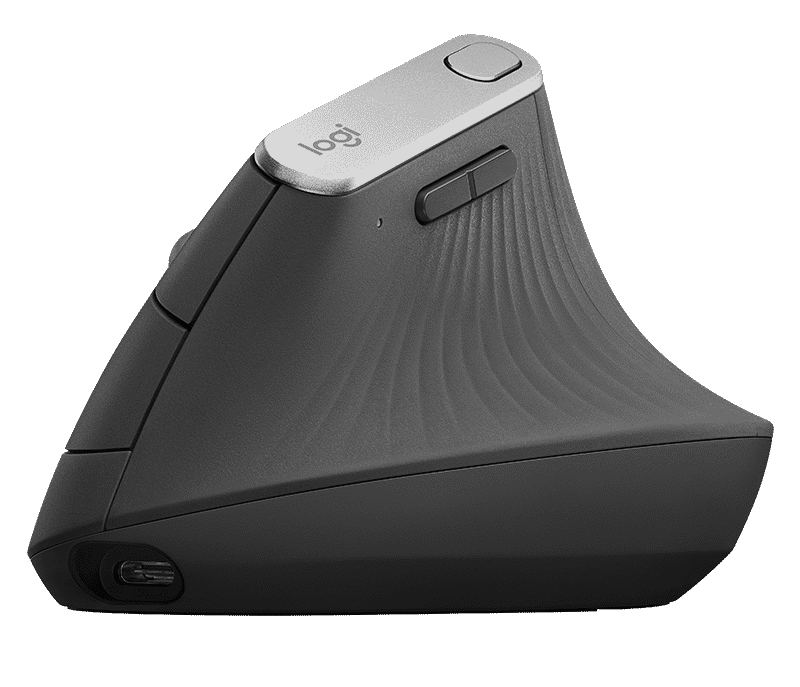 So What Could Have Been Better?

The size isn’t the only downside, though, as there are a couple more.

For one, this mouse was very clearly designed for right-handed people. Logitech does have a few left-handed mice in its catalog, but there doesn’t seem to be any plans for making a mirrored version of this mouse in the near future.

The next most significant problem is how the pressure of pressing the buttons messes with your grip.

The mouse buttons are located on the side. Thus, when you press down on them, you create a sideways force. Because the mouse isn’t exactly perpendicular (57 degrees), a lot of this force gets distributed down onto the table.

In a standard mouse, all the force gets translated down onto the table, but in this one, a little bit gets transferred on to the other side, where your thumb opposes that force. Now this force isn’t much when you’re clicking while browsing the web.

But if you’re gaming, this force could be somewhat significant, and without proper resistance from your thumb, it might cause the mouse cursor to move slightly and thus instead of getting a headshot, you shoot to the left of the head into the forest beyond. This problem is only noticeable while gaming, though, when you need a high degree of accuracy you might notice this effect.

Of course, this problem can be resolved by a tighter grip, which you will eventually get used to, but doesn’t that sort of defeat the point of creating a very ergonomic mouse in the first place?

In my book, the MX Vertical is an absolutely top-notch mouse, especially if you’re on the lookout for a Vertical mouse and the advantages it provides.

Not only does it look great, it feels great, and works perfectly. The dynamic sensitivity changing feature really takes the cake and is something we can expect to be a lot more prevalent among mice in upcoming years.

The union of attractive design, along with performance-enhancing ergonomics is a great combination and definitely has my seal of approval.

Coming in at almost $100, it’s one of the most expensive non-gaming mice on the market. But if you want a mouse which contours to your hand shape, allowing for many hours of comfortable use and is a style statement to book, it really doesn’t get any better than this one. 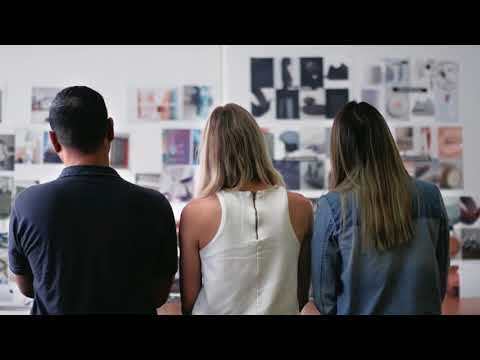